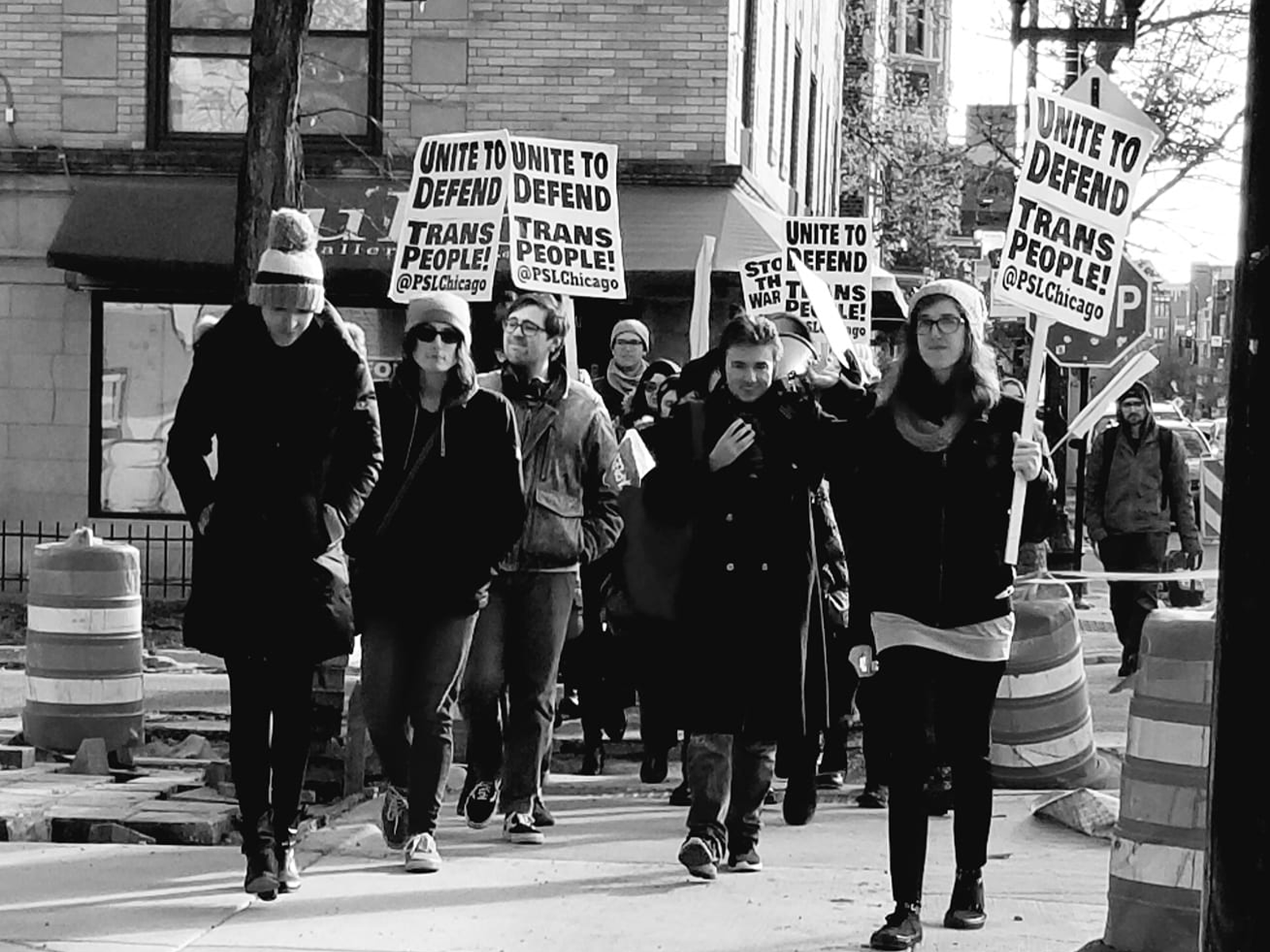 In the early afternoon on November 10, a group of dozens of trans people and solidarity fighters joined a street visibility action to say, “Trans people cannot be erased. We will unite all who can be united and fight back!”

The action took place in the historic neighborhood of Boystown in Chicago, Illinois. Despite the very chilly weather, those gathered were energetic and passionate as they chanted and marched down the street. Passing cars honked in approval and passersby encouraged the gathering, with some of them even joining the event.

The Department of Health and Human Services had an internal memo leaked in late October of this year which documents its intention to change the current legally accepted definition of gender from being trans inclusive to, instead, defining gender in reactionary terms. This is a move would effectively erase trans people out of existence in the eyes of the U.S. government and deny them any kind of civil rights protections.

Between the chants, a speak out was held and several individuals stepped forward to speak up about the current state of being trans and how a revised definition of sex would negatively affect their lives. “They’re doing more than trying to erase us, they’re trying to kill us,” remarked ANSWER Chicago organizer and trans activist Billie Kincaid. Dana Null added that trans people are not only “being killed in the streets, at our jobs, and in our homes, but also in hospitals and in the places that are supposed to protect us.”

Another trans person that shared during the speak-out time commented that the reason trans people are being targeted is “…because we’re living together in communal spaces, supporting each other, and doing what they don’t want us to do.” Another individual cited “reaching out to the community for political support” as the reason she came out to the street meeting, saying that “we all need people for support through this” because it’s “hard to be on social media right now because of how much hate is being directed our way”.

One individual who is not trans but is part of the LGBTQ community joined the event in the name of “queer solidarity” and helping support the community after “horrible recent events.” The resilience, strength, and support of the trans community, and the solidarity shown by comrades and friends in the struggle, was seen as a source of hope against what is ultimately not only an attack on the lives of trans people, but also an attack on all working and oppressed. The era in which we will be kept silent and isolated is over. We will unite with all those who are under attack and keep taking to the streets until the disease of transphobia is a thing of the past.