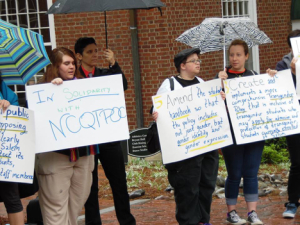 After North Carolina passed one of “ the most anti-LGBTQ laws ever” there has been an upsurge of protests and demonstrations in response, including one at Salem Academy and College, an all-women’s school.

On April 12 at noon, Salem students, faculty and staff rallied against House Bill 2 and presented a list of demands to the board of trustees and the college President, Dr. Sterritt. The demands were intended to “allow all students, faculty, and staff to feel safe, respected and valued at Salem Academy College.” The list was delivered to the board of trustees and to Sterritt’s front door.

The rally was held because, recently, the Board of Trustees and Sterritt had released a statement that unfortunately “did not match the values of our ever-changing community here at Salem,” said Nicole Schoults, one of the students at the event. “We are disappointed in their lack of support in opposing HB2, and we wish to express the changes needed to increase our inclusivity, and to strengthen our community.”

The demands were as follows:

1) To issue a public statement opposing HB2 that CLEARLY outlines how Salem plans to protect its LGBT students, faculty, and staff. 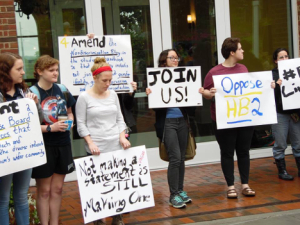 2) To appoint a more diverse board of trustees that better reflects and represents the diverse interests of Salem’s wider community.

4) To amend the nondiscrimination policy in the student handbook so that it includes not just sex, but gender identity, gender expression, and sexual orientation.

5) To amend the harassment policy in the student handbook so that it includes not just sex, but gender identity, gender expression, and sexual orientation.

Since Salem college is a private institution, the college has the full ability to implement such anti-discrimination policies, given the list of “compromises” according to Pat McCrory’s Executive Order released the same day as the protest.

Two days after the protest Dr. Jennings and Dr. Sterritt released a secondary statement acknowledging the executive order, and stating that they “reaffirm the values of Salem Academy and College, including our longstanding commitment to nondiscrimination, and we therefore oppose HB2 and urge our legislators to repeal it.”

While the statement failed to meet the entire list of demands, the administration publicly took a stand against HB2. It will take continued struggle to end all forms of discrimination on the basis of sex, gender and sexual orientation.