An array of right-wing forces — including ultra-right law firms, private adoption agencies and the state of Texas — has aligned against Native nations in the United States in the case of Haaland v. Brackeen, argued orally before the U.S. Supreme Court this past Wednesday. This case revolves around the Indian Child Welfare Act. On the side defending ICWA are more than 497 of the 574 federally-recognized tribes and 27 states, among other entities.

The court’s ruling could overturn not only ICWA, but undermine sovereignty as well for the Native nations.

Thus, the reactionary court is poised to once again weaken or dismantle another in a series of social rights that were hard fought for in the 1960s and 1970s through people’s movements. It has already dealt huge blows to abortion and voting rights.

Before ICWA was enacted in 1978, up to 35 percent of Native children were removed by force from their tribes and placed in non-Native settings, from so-called Indian schools to foster care and adoptions. Some estimate the numbers were much higher. ICWA was created to prioritize keeping the child with relatives or within the tribal entities they belong to. In a final circumstance, ICWA provides for the child’s placement within another federally-recognized tribe.

Claim of racism against white people turns reality on its head

The case before the Supreme Court, Haaland v. Braaken, is a consolidation of related cases involving white people who adopted Native children, but are still seeking to overturn ICWA, saying they suffered “discrimination” by ICWA in the adoption process. Deb Haaland of the Laguna Pueblo in New Mexico is Secretary of the Interior. Chad and Jennifer Brackeen are one of the couples seeking ICWA’s overturning.

The lie of white people being racially discriminated against by Native people is abominable, given the centuries of genocide and white supremacy that continues today. The real objective of the right-wing conspirators is to undermine Indigenous peoples’ rights including over land and other resources.

The court has placed two issues to rule on in Haaland v. Brackeen. One is race as a violation of the Equal Protection clause of the 14th Amendment, and the second is a state’s right versus federal law. Texas is the state in the matter and claims its right to make decisions on child welfare cannot be superseded federally.

The argument in this case is reminiscent of the one put forward by the rightwing in a case on affirmative action that was heard before the court on October 31. The right-wing justices already indicated that they may ban the use of race as a factor in considering a student’s admission to university. Such a ruling would be a huge setback for Black students and other youth of color.

Defenders of ICWA argue that race is not the issue, but rather Native sovereign rights. The many amicus briefs filed in support of ICWA reject the rightwing’s premise that the law is race-based. Instead, it is strictly a political issue involving the sovereignty of Native nations.

For more than 150 years, part of the U.S. government’s systematic abuse of Native people was the mass forced kidnapping of children from their homes as young as five years old. They were separated from their families for years in so-called Indian residential schools. Their language and culture were banned, their hair cut off, with beatings and abuse commonplace.

If the family refused the child’s removal, they would be starved by the government by being denied food. This year, the horrors of mass kidnapping were revealed when thousands of children’s bodies were found buried in mass graves on schools’ grounds in the United States and Canada. It is just the tip of the iceberg.

Still prevalent today is the widespread practice of states like South Dakota and North Dakota removing thousands of Native children from their homes, often languishing for years in foster care or boarding schools, denied their family and their culture.

I attended an all-day meeting in Rapid City, South Dakota, in January 2020 with other PSL members, when dozens of Lakota members from Pine Ridge and Cheyenne River reservations, young and old, related their own experience of being forced into the boarding schools or held against their will in foster care, physically and sexually abused. They were denied their culture and language and made to feel inferior. Many spoke of how they fell into alcoholism and drug addiction because of the physical and psychological pain they suffered.

One of the arguments that ICWA opponents used in the oral hearing was that ICWA keeps children from being adopted by willing non-Native people, and therefore, thousands are left in foster care. But Jean Roach, longtime activist and Minicoujou member of Cheyenne River Reservation, explains that just in the state of South Dakota, thousands of children are removed from their family’s homes by the state’s social services without any remedial measures or attempt to heal and reunite the family. She was one of the sponsors of the Rapid City meeting in January.

The parties opposing ICWA claim that thousands of Native children who remain in foster care outnumber the Native families available, and thus, the children are harmed by not being adopted by non-Native families. But as Roach points out, just in the case of South Dakota, thousands of Native children are in foster care because they are taken from their parents, often due to alcohol or drug issues or just plain poverty. She says:

“The parents and grandparents have to jump through hoops to get their children back. Often, they fail because they don’t have the resources or the state considers them too poor. If they overturn ICWA. It will be a free-for-all with our children. This is about genocide. The children do not learn their identity when they are separated from their people, tradition and culture, and many times they are exposed to racism and isolation. It leads to other issues, to suicide, to confusion. Their skin will never turn white. They will always be a Native child. It is a road of destruction when you take them out of their community.”

White supremacy has long guided the genocidal actions of the U.S. government from the time of its foundation to today. The colonial occupation, wholesale removal of Native peoples and wars were only partially settled in hundreds of treaties between the Native nations and the federal government — treaties that were all violated.

In the 1950s, there was an attempt by the federal government to terminate tribal rights and remove families from reservations to cities. But the rise of the Native struggle stretching from Minneapolis to Wounded Knee to Alcatraz in the 1960s, led to federal laws and policies reinforcing rights of the Native nations. Even if limited in their scope, they were an important advance. The uprisings led by the American Indian Movement, United Native Americans, United American Indians of New England, the International Indian Treaty Council and others helped spur grassroots Native movements and the reclaiming of stolen rights and land.

In his autobiography “Ojibwe Warrior,” AIM co-founder Dennis Banks wrote that while in prison for grocery theft to feed his children, “I would read the papers and see that demonstrations about civil rights and the Vietnam war were going on all over the country. I desperately wanted to be part of a movement for Indian people, but we had no organization to address social reform, human rights or treaty rights …

“I refused to be a typical prison inmate. I began to follow the anti-war movement, the marches and protests, the Students for a Democratic Society (SDS), the Weathermen and the Black Panthers. I made a commitment to myself that there would be an Indian movement.”

Historic actions like the takeover of Alcatraz, the occupation at Wounded Knee, the 1972 Trail of Broken Treaties and the 1978 Longest Walk from Alcatraz to Washington, D.C., made history and raised mass consciousness and pride. Beyond civil rights, national sovereignty became primary.

The militant Native struggles are how the historic “Indian Self-Determination and Education Assistance Act of 1975,” became federal law, strengthening the sovereign rights of Native people with respect to U.S. government agencies. It helped lay the basis for other improvements.

Key to the progress was the reclaiming of the children and their rights, the end of forced kidnapping to Indian schools, and keeping families and nations whole. The Indian Child Welfare Act was enacted in 1978. Dennis Banks, political prisoner Leonard Peltier, and many other leaders were themselves held involuntarily as children in the boarding schools for years.

John Kane, a Mohawk who lives in Seneca reservation, is a podcaster with the program “Let’s Talk Native.” He defends ICWA for trying to address the 150 years of abusive policy toward Native children. But he also points to its limitations:

“ICWA and other government legislation does not fully acknowledge that it is we who should have the sole right to place our children if they are in a home that is unsafe or unfit. Of course, the reason we have some of these unfit homes is 150 years of policy that was meant to destroy us. The residential schools did not make us better parents, it stripped away all the family ties.

“The foster care and adoption system is rife with abuse. Frankly it was a money grab. Many of the foster homes were making tons of money by grabbing social security payments for all these children they were supposedly helping. We know what a debacle that was. In ICWA, all they did was throw up federal guardrails for the states’ child protection services to follow. Now Texas is challenging even that guidance. If the law had been written to emphasize more of our own authority over our own children, then we wouldn’t be in this situation.

“But defense of ICWA is crucial. If ICWA is overturned, depending on how far the ruling goes, it will be very problematic for Native people. It may try to erase certain things we have fought for, whether it is gaming or land use or other issues.”

And the right-wing justices on the Supreme Court indicated their support for just such a broad attack on the fundamental notion of Native sovereignty. From Kavanaugh to Alito, several of the judges showed a complete disdain for the very notion of Native identity and culture.

Justice Kavanaugh mocked the federal government’s attorney defending ICWA. At one point, Deputy Solicitor General Edwin S. Kneedler’s had spoken about the unifying cultural, historical and spiritual identity of Native peoples, even among different nations and tribes. Kavanaugh said to Kneedler, “I think you referred earlier to common spiritual practices that may exist in those circumstances. Does that suggest that Congress could say that, you know, Catholic parents should get a preference?”

With many languages and cultural practices, from the Navajo (Diné) to the Cherokee to the Lakota, there is a strong sense of common identity and unity among the Native peoples, especially in resisting colonialism and genocide. This was driven home in the months-long battle against the Dakota Access Pipeline, when more than 100 tribal entities came to Standing Rock to defend water and the land, or in the struggles of the 1970s. And this determination to struggle is sure to continue in the face of this legal attack. 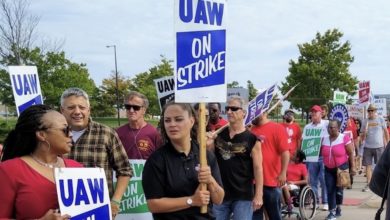