On August 2, the activists and community leaders of the Jacksonville Progressive Coalition gathered downtown to celebrate the official public launch of the Take ‘Em Down Jax campaign. Take ‘Em Down Jax is an effort being primarily spearheaded by Occupy Jacksonville, with the goal of removing monuments, symbols, and names that honor Confederate leaders, white supremacists, and slave owners from all public spaces in Jacksonville, Florida. 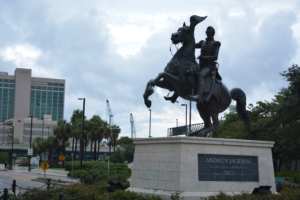 In addition to the prominent monuments around the city honoring people such as the genocidal white supremacist Andrew Jackson (for whom the city is in fact named after), there are many bridges, roads, and schools named after other white supremacists and Confederate figures. Just a few examples include Robert E. Lee High School (a Confederate general), the Fuller Warren bridge (a member of the Ku Klux Klan), the Isaiah D Hart bridge (a slave owner), and Andrew Jackson High School.

The list goes on and on, a reality which has caused controversy in Jacksonville for many years. A high school that was particularly egregiously named after Nathan Bedford Forrest—a Confederate general, slave owner, early leader of the Ku Klux Klan and possible war criminal—had its name finally changed only three years ago, in 2014, as a result of community pressure. The Take ‘Em Down Jax campaign represents a renewal and strengthening of such an effort by Jacksonville’s people. Activists are marching, gathering to speak out at local political events, building educational campaigns, and spreading the word online to continue to build momentum for the movement.

The August 2 launch event and accompanying press conference with local news, took place at one of the city’s regular Art Walk festivals. #TakeEmDownJax buttons were handed out around the event, along with literature detailing the Confederate origins of many of the names one sees around the city. Jacksonville’s Veterans for Peace set up a booth at the festival where passersby could learn more about the campaign and how to get involved. 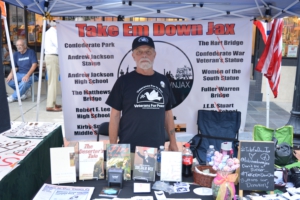 Such veteran support for this type of movement is important, as those opposed to dismantling pro-Confederate symbolism often frame their arguments to the public with a “pro-veteran” sentiment, claiming that seeking to take down Confederate monuments and names is historical “erasure” of “American soldiers and war heroes,” and people who “sacrificed” for their country. This is incredibly ironic and historically ignorant rhetoric, considering that Confederate soldiers fought against the United States, killing the soldiers actually fighting for the United States. Those who espouse such a deceitful, misleading position are simply seeking to maintain this country’s terrible tradition of white supremacy by tugging at people’s heartstrings. Claiming that removing Confederate monuments is “erasing history” ignores the fact that such monuments could easily be transferred to a museum or similar appropriate educational setting, which is another goal of the Take ‘Em Down Jax campaign.

Those who defend, act as apologists for, or even outright revere the legacy of the Confederate States of America are complicit in advancing its original ideals: white nationalism, genocide and slavery. A small group of counter-protesters at the launch event did just that: they waved Confederate flags, held signs that read “Keep ‘Em Up Jax,” and marched while chanting outside the press conference in an attempt to intimidate those supporting this progressive action in Jacksonville.

Working class people throughout the country are often misled by rhetoric equating the Confederacy with “Southern heritage and pride,” or some sort of righteous rebellion against an oppressive establishment. Just like U.S. wars around the world today, the Civil War was a war started by the rich in the South to secure their property and gain more wealth by using working class people as cannon fodder. Southerners then and now have nothing to gain by allying with the rich owners who do not, and never will, care whatsoever about the struggles of the poor.

Struggling to dismantle the horrific, oppressive legacy of the Confederacy is essential in building unity among working class people—rather than letting the rich and powerful divide us up along racial lines. The first step is ensuring that we will no longer publicly memorialize the names and ideas of the slave-owning, genocidal, white supremacists of the past.