Based on statements released by #OccupyICETPA 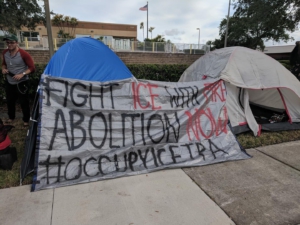 A coalition of organizers and movements in Tampa have established an Occupy ICE Tampa encampment at the Department of Homeland Security’s (DHS) Immigration and Customs Enforcement (ICE) facility at 5524 W Cypress St, Tampa, FL 33607, enjoining the community to play a role in the national campaign to occupy and abolish ICE.

-Dissolve the January 2018 agreement, jointly announced by several Tampa Bay Area sheriffs, including Pinellas Sheriff Bob Gualtieri and Polk Sheriff Grady Judd, along with ICE officials and the executive director of the National Sheriffs’ Association. The new agreement allows ICE to contract with local law enforcement to house undocumented persons arrested until federal officials can pick them up. ICE then reimburses the agencies for those detentions

-Begin thorough, immediate and transparent investigations (with investigative body being a community-elected civilian review board) into prolific reports by detainees of criminal abuses, including sexual violence at all immigration detention centers in Florida

-Immediately and permanently cease deportation to war-torn countries and to areas of political disasters, disease and famine (such as in the recent case of 92 detained Somalis from Glades County Detention Center)

-Ensure that all DHS facilities, including all ICE detention facilities and Customs and Border Patrol (CBP) holding facilities, have not only contractually adopted but also implemented the DHS National Prison Rape Elimination Commission standards, and to proactively and quarterly publish information on all reported complaints of sexual abuse in DHS facilities. 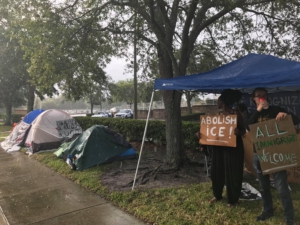 Florida experienced the country’s biggest increase in ICE arrests in 2017, according to a Pew Research Center report. In January of 2017, in a deal struck between 17 Florida sheriffs and U.S. Immigration and Customs Enforcement, complicit sheriff’s offices claimed they would allow local authorities to hold undocumented persons arrested even beyond the time they normally would have to be released based on state or local cases.

The agreement was meant to answer a series of court rulings that had said holding undocumented persons beyond their regular release time violated the Fourth Amendment.

Across the state of Florida, sexual violence as well as physical and verbal abuse and antagonisms have been prolifically reported by immigrant detainees in facilities like Krome and Glades County.

With little oversight, sweeping powers and exhibited impunity, ICE is a blight on our community and communities across the country.

Tampa is a place of welcoming.

Trump has continued in Obama’s footsteps and doubled down on mass deportation, roundups and imprisonment by framing it in a toxic rhetoric rife with racism, nativism, white nationalism, xenophobia and Islamophobia. 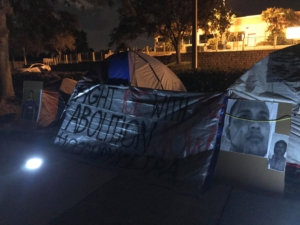 How to get involved

-We call out to the community to join us in this occupation:

If you support this movement, **please join the occupation** even if only intermittently to show your solidarity with the movement to abolish ICE.

Non-perishable foods, ready to eat meals and snacks would be greatly appreciated and can be delivered or brought directly to our occupation site at the DHS ICE facility at 5524 W Cypress St, Tampa, FL 33607.

We need people willing to transport occupiers to nearby restroom facilities (within a couple of miles of the occupation site).

Vigils, demonstrations, sit-ins and other creative acts in conjunction with the sitting occupation would help to bolster support and raise visibility.

In the case of arrest of the occupiers, calls for support will be circulated by our logistics and support teams with ways that you can help free comrades who are fighting against this rogue agency.