On February 10, 2018 at 7:00 P.M., Tampa Police Department officers Salvatore Mazza and Juan Hernandez arrived at a north Tampa home on a domestic disturbance call, where, according to the Tampa police, a man was reportedly threatening a relative. That man was Sidney T. Richardson IV, a former U.S. Marine who served in the Iraq War and was honorably discharged five years ago. According to his friends and family, Richardson had been diagnosed with and sought mental health services for PTSD.

Within an hour after their arrival, the police officers had fatally shot and killed Richardson. He is the 121st person to be fatally shot by police in the U.S. in 2018.

But friends and family of Richardson, as well as local activists, are questioning the account given by Tampa police. Showing Up for Racial Justice Tampa and the Restorative Justice Coalition, two local social justice activism groups, are demanding a federal investigation of the shooting. Activists have expressed concerns that the Tampa Police Department, which is currently conducting its own internal investigation of the incident, cannot be trusted to investigate itself, and that involvement of the U.S. Department of Justice is therefore necessary.

Under the pretext of an ongoing internal investigation by the Tampa Police Department of itself, the department is refusing to release details in their report of the incident to the public. A public records request has been filed for testimony from the officers involved. Another request filed for transcripts of the 911 call that led to the incident has been responded to with a suspiciously unusual $25 fee and a two-week waiting period.

However, despite the unwillingness of Tampa police to respond to the public, some information has come to the attention of local activists, bringing into question statements given by Tampa Police Department officials regarding the facts of the incident.

Michelle Williams is a local activist and a friend of Richardson’s of six years. She helped him to secure his benefits as a veteran through the Department of Veterans Affairs and supported him as he sought mental health services for his PTSD. She knows and has spoken with family members of Richardson, none of whom have been speaking with the press, including the 17-year-old cousin whom the officers claim he was threatening. According to her, while it is true that Richardson was holding a machete, he was not “wielding” it and did not threaten anyone — a direct contradiction to official Tampa police statements on the shooting.

According to local activist and Restorative Justice Coalition co-founder Angel D’Angelo, Richardson had made the Tampa Police Department aware that he was suffering a mental health emergency the day before he was killed by police. Richardson went directly to the department asking for help. Officers at the department called his home and warned his family that he “might not be well”, but ultimately did nothing to help Richardson. Some of his friends believe that Richardson would still be alive today if the police had taken the initiative to duly hospitalize Richardson under a Baker Act.

Williams later commented during a demonstration, “It didn’t take a rocket scientist to see that something was wrong with Sidney Richardson that day. MHC [Mental Health Care] should have been called on point.” She described an experience in which she witnessed such an intervention for another man, who she said was Baker Acted, which had been successful, and asked, “Why could that not have happened for Mr. Richardson? He came here seeking help. That didn’t happen.”

In the months leading up to the shooting, Richardson had become paranoid. He believed that the government was spying on him and rarely left his home. He also struggled with depression and unstable moods. Nonetheless, he made every attempt to reach out to his friends and family and to find help.

Richardson was undoubtedly suffering a mental health crisis at the time of his death. Williams said of Richardson, “Sid is not a defiant person. He must have been going through some kind of episode. Why couldn’t he be afforded someone who could talk him off the ledge?”

It is possible that Richardson did not comprehend the orders by officers to drop the machete. Furthermore, although Richardson did not drop the machete after deployment of a stun gun and did not fall to the ground, it is likely that he was paralyzed and incapacitated from swinging or dropping the machete. On these grounds, activists are questioning whether the use of lethal force by the responding officers was unnecessary and excessive, and whether Richardson’s death could have been prevented.

Other concerns have been raised by activists regarding the officers’ actions: Mazza and Hernandez chose to shout commands at Richardson, whose thinking was clearly impaired. They chose to deploy a stun gun. They did not attempt to deescalate the situation. They did not focus on getting the 17-year-old to safety. In firing his weapon, Hernandez, in addition to killing Richardson, also endangered the 17-year-old.

These concerns were summarized in a protest sign displayed during a “rapid community response” demonstration on February 13: “De-escalation, not execution.”

Michelle Williams recorded live video on Facebook of this dialogue. She voiced her support for federal oversight: “I want to be fair. I want to see the outcome in the investigation. And if the outcome doesn’t come, I think that we the citizenry here, in Tampa, we have the right to call on an independent federal investigation on what’s happened here.” She and others spoke on the issue of implicit racial bias in policing, listing examples of incidents in Florida within the past few years that illustrate disparities in police violence when engaging with white versus Black men. Williams, who hosts a local radio show and was one of the first to make the public aware of Richardson’s military service, also spoke on the need for better law enforcement practices when responding to mental health and other health emergencies.

Florida ranks 44th in mental healthcare access and spending in the United States. In Tampa, police routinely harass homeless people, many of whom are veterans. In January 2017, officers made arrests at a food sharing event for the homeless, describing it as an “eye sore” and showing disregard for the city’s most vulnerable citizens. Tampa does not require candidate police officers to undergo implicit bias training or take an implicit bias test. The Tampa Police Department does have mental health responders, but Richardson was not responded to with such professionals.

Regarding these issues and more, the Restorative Justice Coalition has launched the “Control the Patrol” campaign in Florida, which calls for sweeping reforms to law enforcement practices and police accountability, including such measures as immediate and independent federal investigations in all police incidents resulting in death or hospitalization, an elected civilian board to oversee police, body cameras on police officers, rigorous training on cultural competency, and policies to stop use of deadly force. An online petition is seeking 500 signatures, of which it now, as of the writing of this article, has 475.

Since releasing this petition in August 2017, Tampa police have killed two people. D’Angelo believes that, had these reforms been implemented, the killings could have been prevented. At the very least, the process of investigating the killings would have been immediate and thorough with acceptable outcomes.

In addition to the Control the Patrol campaign, the RJC has organized mass-callings to Tampa Mayor Robert F. Buckhorn’s office. They have also had some success with targeting and lobbying specific Tampa city councilmembers. 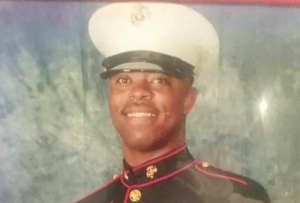 At the demonstration, Williams emphasized that she and her fellow activists would wait for the outcome of the Tampa Police Department’s internal investigation before pursuing an independent federal investigation. “But for right now,” she concluded, “we are Sergeant Sidney T. Richardson’s voice. And we’re going to tell his story. And his story is: Our veterans need to be treated with respect.”