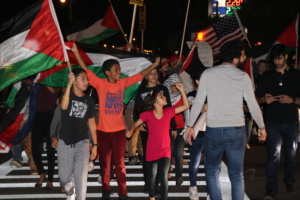 On Friday, December 8, over 300 people gathered in Tampa to protest Donald Trump’s decision to move the U.S. embassy to Jerusalem and declare Jerusalem as the capital of Israel, a decision that runs against international law.

Multiple U.N. resolutions have been passed since 1967 calling on Israel to withdraw its military from the occupied territories and to dismantle all Israeli settlements in Palestine. Despite the outcry by the international community over Israel’s illegal occupation and war crimes, Trump determined “that it is time to officially declare Jerusalem the capital of Israel.”

The unequivocal support for Israel is not unique to the Trump administration. Both Democrats and Republicans have been in lockstep when it comes to legitimizing Jerusalem as the capital of Israel. The declaration is the fulfillment of the Jerusalem Embassy Act of 1995, which mandates that the United States move its embassy to Jerusalem. In the Senate, the bill was cosponsored by such prominent Democrats as Joe Biden and John Kerry, with only one Democrat (the late Robert Byrd) voting against it. In the House of Representatives, just thirty out of 204 Democrats voted against the Embassy Act, along with independent Senator Bernie Sanders. 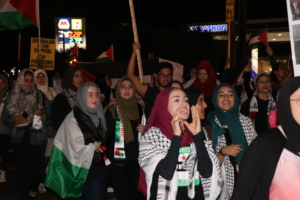 Tampa joined hundreds of cities across the world in protesting the decision. The majority of protesters were Arab and Palestinian, raising dozens of Palestinian Flags and chanting “free free Palestine!” and “Hands off Jerusalem!” The spirit was one of anger, but also one of empowerment as people of all ages— the youngest being two years old and the oldest being 70—joined together to fight for their freedom and the freedom of Palestinians.

Jerusalem is a very important city for Palestinians historically and culturally. “I think a lot of people picture Jerusalem to be on the border between Palestine and the state of Israel. But Jerusalem is actually in the middle of the West bank,” said Andrew Pitz Nordera, a member of Students for Justice in Palestine at the University of South Florida in Tampa. Thirteen-year-old Saeel Ibrahim, an American-born Palestinian at the protest, said: “As a Palestinian it doesn’t feel right, because Jerusalem has always been our city.”

To the people at the protest, many of whom have been fighting for Palestinian liberation for decades, Trump’s declaration was discouraging. “Five years ago I organized my first protest with my brothers and sisters for Palestine…and five years later where are we? Jerusalem is the ‘capital’ of Israel. It’s demoralizing, I ask myself ‘why don’t I just give up,’” said long-time Palestinian activist Ahmad Saadaldin in his speech at the rally. “But then I remember our parents, our grandparents. They have been waiting for the day that they could go back to their home!”

Saadaldin is one of the founders of the media activist group Peace House, and is running for office in District 58 for Florida House of Representatives as an independent candidate. “We are riding this wave of anti-establishment politics and we want to send a powerful message that the people aren’t tolerating this anymore,” he said. Saadaldin also spoke in support of Boycott, Divestment and Sanctions, an international movement that has been tremendously successful in bringing attention to Israel’s countless human rights violations. 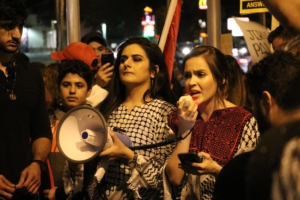 Diana Halum, a lead organizer of the event and a Palestinian who grew up under occupation, also expressed her disappointment about the decision. “People can’t comprehend how scary it is. Mothers won’t let their children play outside because they are terrified because of the occupation. Trump declaring Jerusalem Israel’s capital sends the message that the occupation is okay because America’s okay with it.”

As Murphy said in his speech, “We stand here today in the belly of the beast.” It is our obligation as citizens of the most powerful imperialist state on the planet to stand up and fight for the end of imperialism. The U.S. continues to provide billions of dollars of military aid to Israel, as it has done for decades, so that the apartheid state of Israel can “protect itself” from Palestinians who have no military at all. What Trump and the U.S. really care about is maintaining an imperialist stronghold in the Middle East.

We must continue to build an anti-imperialist movement separate from the two-party system, because as we know, if there is anything that both Democrats and Republicans agree on, it’s war. 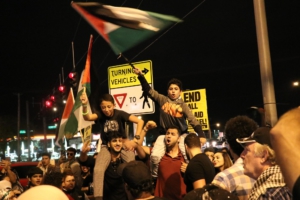 Moreover, we must have something to fight for. We must fight for the true freedom of socialism: freedom from poverty, exploitation and racism; freedom to have healthcare, education, and housing; and freedom for oppressed nations, for all of humanity and for Palestine.