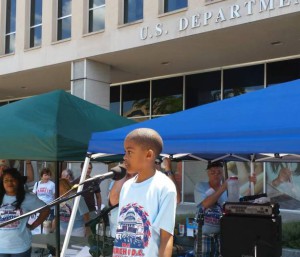 The Bad Ass Teachers, a national organization of teachers who “refuse to be blamed for the failure of society to erase poverty and inequality” and conversely organizes to demand the resources to do just that, marched onto the U.S. Department of Education today.

Asean riled the crowd with one of his many chants exposing the corporate direction of the DOE: “Education is a right, not just for the rich and white.”

‘”We want everyone to succeed, but we need the resources to do it,” demanded Asean.

The 10 year old activist likened problems of the educational system to the systemic problems of super-profit corporations: “They are just greedy for money like Walmart, the wealthiest company in the world, by giving people just eight dollars an hour.”

The crowd welcomed copies of Liberation and a piece of literature on education from the Party of Socialism and Liberation. Maggie, a science teacher from Missouri teacher summed up the need to for resources for teachers to do their job: “Every student should have access to a good science education to prepare them for all types of work, but never at the expense of other subjects.”