The Tennessee state legislature has passed vicious and discriminatory anti-transgender legislation into law including a “sports bill” and a “bathroom bill.” The General Assembly is considering five more similar bills. This comes along with a recent wave of anti-trans legislation in states across the country.

The “sports bill,” which passed, prohibits trans student athletes from participating on the athletic teams and competitions of their genders. The text of the law requires students’ participation in athletics to be determined instead by “the student’s sex at the time of the student’s birth, as indicated on the student’s original birth certificate.”

Tennessee isn’t the only state to pass a “sports bill” with this same language. Thirty other states introduced bills with identical language at the beginning of the year. That this was a concerted push by right-wing capital is certain; these and many other bills across the country were developed from bill “templates” provided to politicians by anti-trans think tanks, which are themselves funded by conservative business groups posing as “philanthropic” organizations.

The “bathroom bill,” which also passed, requires companies that allow trans people to use the proper restroom to post warning signs at multi-stall restrooms. These notices must state that people of “either biological sex” may use the restrooms “regardless” of being marked as “men’s” and “women’s” restrooms.

The text of the law states that failure to post these notices would constitute a Class B Misdemeanor, a criminal violation. The language is unclear on who would be charged — the owners of the business in question, restroom occupants, or someone else — and there was no discussion of who these charges would apply to in the House and Senate debates. The effect however is clear; the billforces businesses into discriminating against trans people.

The bills being considered are:

These bills are pushed by conservative transphobic politicians and lobbyists. Transphobia, hatred of or prejudice against trans people, is an ideology that pits the working class against itself. By forcing businesses and schools to participate in and enforce discrimination, they have forced the workers in those schools and businesses to “pick a side.” In doing so the Tennessee legislature sets back the unity of not just trans people, but of all people.

Instead of a united movement of working class people, including trans people, who have suffered from an unprecedented pandemic and associated economic collapse, these transphobes would have us fighting each other. The Republicans have no commitment to workers’ economic well-being, so when workers are suffering and looking for relief, the right wing ramps up their demagogic cultural attacks in an attempt to maintain their base’s support.

The only way to resist these attacks is for people from all backgrounds to stand in strict solidarity against transphobia, gender-based violence, and all other forms of bigotry. The Party for Socialism and Liberation is building a movement united around a revolutionary socialist program for the material and cultural betterment of all.

PSL East Tennessee is planning an upcoming protest on this urgent issue, with the place and time still to be determined. Contact [email protected] for more information and to get involved. 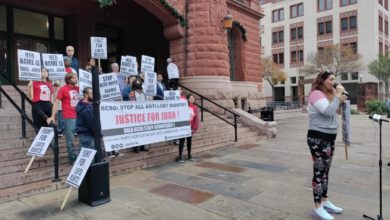