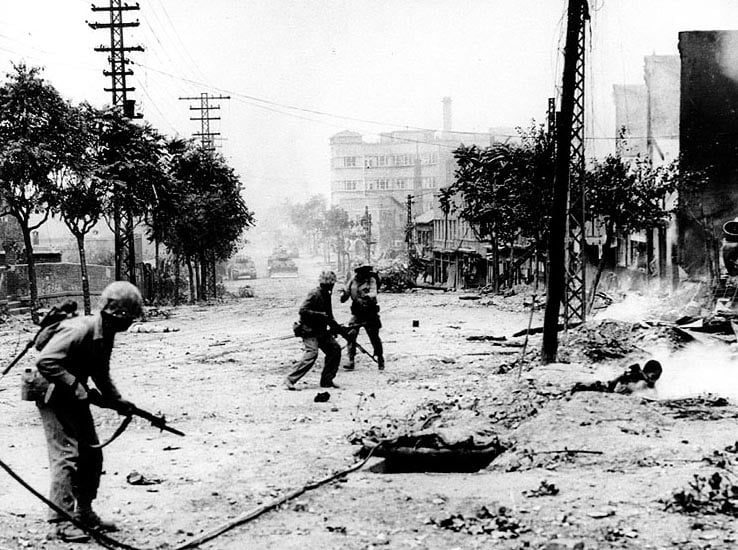 Millions of Koreans died during the Korean War that began on June 25, 1950, and ended in a stalemate and Armistice Agreement that was signed on July 27, 1953, by the United States and the governments of North Korea and China.

Today marks the 64th anniversary of the start of the war. To this day, the United States refuses to sign a Peace Treaty with North Korea. Korea remains divided and tens of thousands of U.S. troops still occupy the southern half of the Peninsula.

When the Japanese emperor signed the unconditional surrender to the United States on August 15, 1945, ending World War II, the United States demanded that the military commanders of the Japanese forces that had colonized Korea and controlled southern Korea not leave their positions nor surrender their command of Korea to any Korean people. Rather, they were only to transfer their command to U.S. military forces once they arrived in South Korea.

The United States recognized that Kim Il Sung in Korea, as they did with Ho Chi Minh in a similarly divided Vietnam, would be far the most favored choice of the Korean people in the construction of a post-colonial government. That is why they insisted that Korea be divided and the zone of U.S. occupation be ruled by an anti-communist regime.

Fear and hatred of socialism by the U.S. government led to the long-term division of both Vietnam and Korea into northern and southern zones. And it inevitably led to two full-scale wars that took the lives of more than 80,000 U.S. soldiers and millions of Korean and Vietnamese people. What the U.S. feared at the end of World War II with Japan’s surrender in August 1945 meant that the Korean people would face perpetual division rather than national liberation.

Thousands of American troops arrived at Inchon, South Korea, on Sept. 8, 1945, and took over from the Japanese. They handpicked Koreans who had collaborated with the Japanese occupiers to form a new South Korean government.

During the next five years, there were endless clashes between the new government in South Korea and progressives and socialists in southern Korea. Thousands of progressive trade unionists and peasant leaders were executed as “communist sympathizers.”

On June 25, 1950, the clashes between the South and North Korean armed forces led to full-scale war. Within three days, the communist-led armed forces had liberated almost all of South Korea. Seoul fell quickly. People’s Committees, led by communists, formed immediately throughout southern Korea.

As they retreated, the South Korean government ordered what was known as the Bodo League Massacre in the area that they still controlled. At least 100,000 progressive people were executed on the suspicion of sympathizing with communism, according to the Truth and Reconciliation Commission that was established in South Korea in 2005. Other estimates put the number executed at closer to 200,000.

The United States decided to rush military forces to stop the reunification of Korea under the control of the communists. Since the Soviet Union, which wielded a veto at the UN Security Council, was boycotting the United Nations as a protest over the refusal to seat China’s communist-led government at the UN, the Truman Administration quickly secured a UN resolution that provided the U.S. military operation with the mantle of a UN military operation.

For three years, the United States Air Force carried out regular saturation bombing of North Korea. Not one structure of more than one story remained standing as the bombing leveled all of North Korea. The main complaint of U.S. Air Force pilots by the last stage of the war was that “there is nothing left to bomb in North Korea.”

More and more people in the United States also want a Peace Treaty and normalization of relations. Instead, however, the U.S. government remains committed to carry out regime change and topple the government of the DPRK. Imperial fantasies die hard.