The following is based on a presentation given by the author, the Chicago Coordinator of the ANSWER Coalition (Act Now to Stop War and End Racism), on an anti-NATO panel at Occupy Chicago’s April 7 kickoff to the “Chicago Spring.” The final event of the spring actions will be a permitted march on the NATO Summit on Sunday, May 20.

On May 20 and 21, the NATO powers are holding a pro-war summit here in Chicago. Leaders from the world’s most powerful countries will be descending on the city to promote an agenda of conquest, genocide and plunder.

The ANSWER Coalition will be mobilizing people from Chicago, the Midwest and the entire country to come to a mass protest on May 20. In Chicago, we will be passing out tens of thousands of leaflets in the streets and promoting the protest via social media and the protestnato.org website.

On May 20, the ANSWER Coalition will be marching under the slogans “U.S./NATO Out of Afghanistan! No War on Iran! Money for Jobs and Education.”

The truth about the US and NATO war machines

The U.S. is by far the most powerful country in the world in terms of wealth and military might. NATO, a military alliance dominated by the United States, includes the other imperialist powers and serves as an enforcement arm of the 1 percent.

Washington, the Pentagon and NATO are also, without a doubt, the biggest purveyors of organized violence, mostly against poor people, in the world today. The media goes to great lengths to hide from the public the atrocities of the U.S. government in Afghanistan, Iraq, Libya and beyond. Over 1 million civilians were killed in Iraq as a result of “shock and awe” bombing of cities followed by the brutal invasion and occupation of Iraq, for example.

We must ask the basic question: Is all the violence of the current wars, occupations and interventions really for humanitarian reasons? Are the tens of thousands of bombs dropped on civilian populations and infrastructure really for “democracy” and “freedom”? No.

The truth: U.S. foreign and domestic policy are carried out solely in the interests of Wall Street, the Big Banks and Big Oil. No foreign intervention or war waged by the U.S. is waged in our interests or for humanitarian reasons or to promote democracy. U.S. wars are waged to help protect and expand the profits of the billionaires.

The economic system we live under, capitalism, seeks to break down all barriers to the accumulation of profits for U.S. corporations. Washington and the Pentagon’s role, and by extension NATO’s role, is to enforce the domination of Wall Street. The United States is an imperialist country.

To the 1 percent of the 1 percent, domination of the Middle East and the wider region is inseparable from their basic interests.

The Middle East and parts of Africa and Central Asia contain the world’s largest deposits of energy resources and are also at the very crossroads of the world. The greater the subordination of the region’s people and countries, the greater the profits for BP, ExxonMobil, the big banks and all of Wall Street.

In the absence of the Soviet Union and much of the socialist camp, U.S. imperialism has embarked on a new strategy to reshape the Middle East and global relations as a whole. The heart of this strategy calls for every non-client regime in the region to be overthrown—by massive force and bloodshed if necessary. The U.S. will, in fact, accept nothing but servants in the region.

Both major parties are carrying out this basic regime change strategy. This should be surprising to no one—because the Republican and Democratic parties, as reflected in their actions, serve the interests of the billionaires.

Iran is an enemy because the Iranian people kicked out the U.S. air bases and drove a U.S.-backed monarch from the country in 1979 and because the government refuses to go down on its knees before the U.S. campaign to recolonize the country.

The U.S. strategy goes beyond the Middle East. China and Russia are also targets. If the U.S. were to overthrow the governments of Syria and Iran and there were nothing but subordinated governments in the region, this would pose a great danger to the world in the form of a more dominant U.S. imperialism and would increase, not decrease, the possibility of a war with China or Russia.

To the U.S. 1 percent, rapid Chinese industrial development poses a major competitive threat and a barrier to the expansion of their profits on a global scale. The current government of Russia is a barrier to the 1 percent taking over that county’s vast energy and other resources.

In every case where the U.S. government plans regime change, the basic strategy is to drive a wedge between the targeted government and the people of the U.S.

In each case, the U.S. employs the following regime-change tactics to disarm opposition to war and intervention:

The U.S. has no right to decide the legitimacy of foreign governments. U.S. aggression aimed at regime change cannot bring progress for people abroad or here at home. Our tax dollars should be spent on people’s needs and not on waging war for the 1 percent.

Special forces troops from some NATO countries are reportedly already in Syria and a river of aid, supported by the U.S., is flowing into the hands of anti-government fighters. The U.S. is funding a terrorist campaign against the Iranian government. Iran and Syria are completely surrounded by U.S. fire power and regimes subservient to Washington.

There is no way that the overthrow of the Syrian government at the current time will do anything but strengthen the hand of imperialism in Syria and the wider region.

On March 19, 2011, when the bombing of Libya started right on the heels of the Egyptian revolution that overthrew the U.S.-backed dictator, Hosni Mubarak, I spoke at a march on the anniversary of the Iraq war. I said, “Make no mistake, the attack on Libya is not only meant to bring Libya to its knees but also to bring a halt to the Arab uprising.”

What the people of Syria and Iran need, above all else, is solidarity from the people in the U.S. and the rest of the world in the defense of their right to self-determination.

On May 20 in Chicago, we will march as one on the NATO Summit and send a clear message to people of the Middle East and the wider region that we are with them in their struggles for liberation from the yoke of U.S./NATO imperialism. 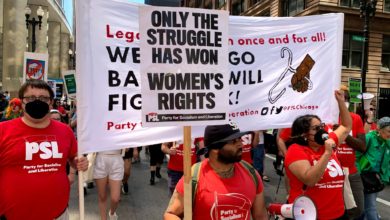