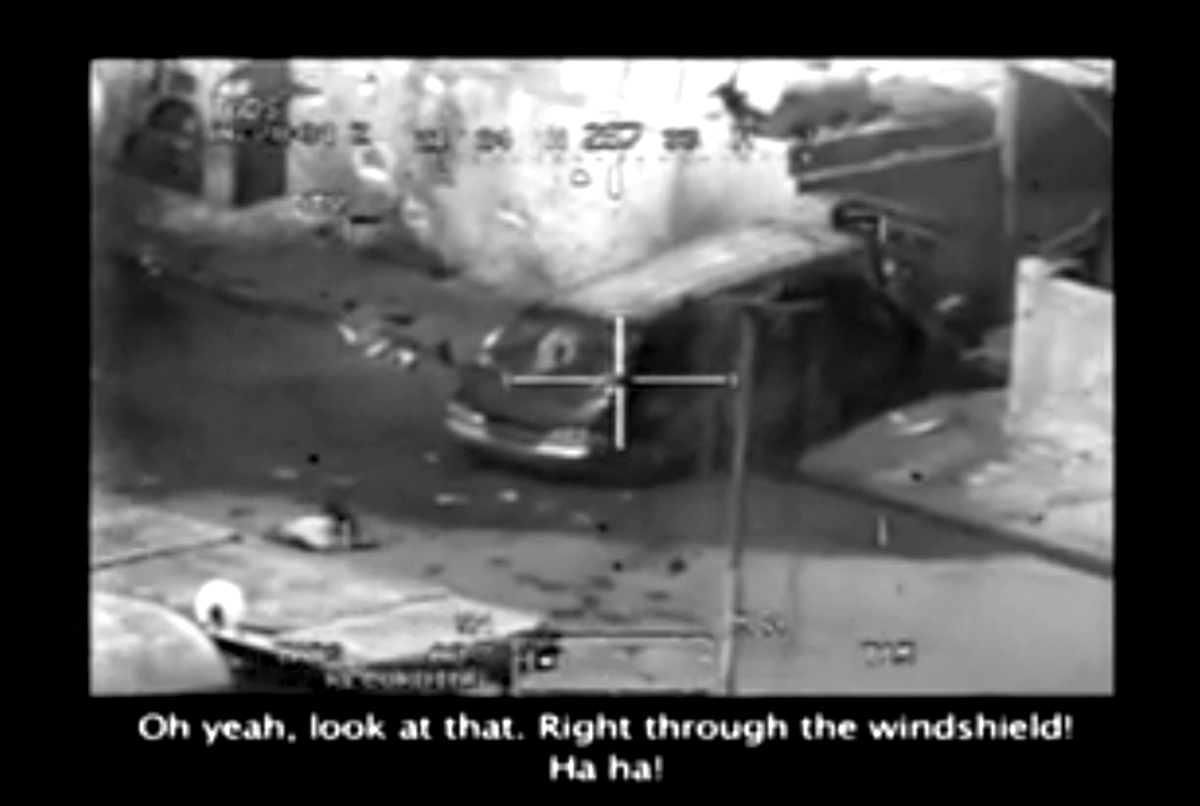 The dreaded U.S. Apache helicopters, flown by U.S. pilots, are back in Iraq just two-and-a-half years after the U.S. military withdrawal. This was revealed today by the Pentagon press secretary, Rear Admiral John Kirby, as he explained the role of the now 800 U.S. troops back in Iraq.

In 2010, people all over the world watched in disgust at a  first-hand look at the U.S. war on the Iraqi people.

Cockpit video from a U.S. Apache attack helicopter, named “Collateral Murder,” gave everyone a viewpoint that had been kept very hidden over the previous seven years of the occupation.

We watched in horror as a group of innocent people were massacred, blown to pieces, by bullets that looked as large as basket balls.

We heard the pilots—with extreme arrogance and even humor—beg for permission to exterminate the group of unsuspecting human beings. We watched them circle a man mortally wounded, helplessly dragging himself across the ground, waiting to unleash another barrage of rounds meant to demolish armored vehicles.

We watched in disbelief as a van full of civilians, who stumbled across the horrific scene, were attacked by the Apache for trying to help their mangled neighbor. We heard the pilots laugh as they filled it with bullets.

When the pilots learned that there were two small children inside the van, we hear them blame the victims for their own selfless act of goodwill. We heard the pilots laugh as a body on the ground is run over by a Humvee.

As U.S. Army intelligence analyst Chelsea Manning accurately described as part of her inspiration for leaking the Collateral Murder footage and troves of other documents to Wikileaks, the U.S. war on Iraq resembled “a child torturing ants with a magnifying glass.”

This wasn’t just a war against “militants.” It was a war against the civilian population. All Iraqis were subject to this brutality. Collateral Murder was understood for what it was: not just one bloody mistake, but representative of the day-to-day operations in Iraq. Just one drop in a sea of blood.

And it helped end the war. When not only the full extent and gory details of the war on Iraqi civilians was revealed, but the complete impunity under which the U.S. military operated, the Iraqi people would not accept any kind of extended U.S. military presence in the country—which then-Secretary of Defense Robert Gates was desperately trying to secure on behalf of the Obama administration.

Now those Apaches are back. The pilots are back. They will be hovering over the heads of the Iraqi civilians, who endured eight long years of being the Apache’s “collateral damage.”

We cannot expect the role of Apaches this time around to be any different. Not the indiscriminate violence, not the type of callous behavior we heard from the pilots, not the impunity to commit crimes.

The White House and Pentagon want us to believe that they’re not doing anything major in Iraq—as they slowly build-up U.S. forces again—because they know public opinion is against them.

But now that we’ve all seen Collateral Murder, we can all imagine how major it would seem if we were an Iraqi person, again looking up at the terrifying machine we thought had finally left.

For the many thousands who met the same fate as those innocent human beings—and children—in the Collateral Murder video, we must fight this new U.S. military adventure every step of the way.