UPDATE: AB 1400 was withdrawn by assembly member Ash Kalra on Jan. 31 shortly before it was scheduled for an assembly floor vote. CalCare activists and the California Nurses Association say they are are “outraged” by the Democratic Party’s betrayal and remain committed to continuing the fight.

Single-payer universal healthcare is within reach for Californians. On Jan. 20, Assembly Bill 1400, also known as CalCare, passed the California state assembly appropriations committee. If CalCare passes the assembly floor by Jan. 31, it will advance to the state senate.

Healthcare disparities paved the way for the COVID-19 pandemic to wreak havoc in California. COVID-19 has killed around 80,000 people in California so far. If California were a country, its COVID-19 death toll would rank 20th in the world.

Failure of the healthcare industry during COVID-19

In 2019, the Global Health Security Index (GHS), compiled as a joint project between the Nuclear Threat Initiative (NTI) and Johns Hopkins Center for Health Security, ranked the United States among one of the best prepared to address a pandemic. This proved to be far from the truth. The United States is still experiencing catastrophic failures across multiple sectors and leading the world with COVID-19 deaths — 882,000 at the time of writing.

Saul Kanowitz, a public health worker, described to Liberation News the unmatched contributions of frontline workers, saying: “All one has to do is look at the print and electronic media to see the herculean efforts of frontline workers who literally gave their lives, through exposure to SARS-CoV-2 virus and developing COVID-19. Healthcare workers are disproportionately counted amongst the [882,000-plus] deaths.”

While healthcare workers die on the front lines, hospital executives enact widespread budget cuts and manufactured labor scarcity, citing staffing shortages to increase their profit margins. For example, elite institutions like HCA and Tenet Healthcare and Mayo Clinic awarded the top five officials in their chains a combined total of $846 million as their healthcare staff was crushed by waves of COVID-19. A nationwide survey found that 83% of nurses reported at least half of their shifts were unsafely staffed.

Kanowitz added that it is public health employees and the rest of the working class who make society run: “There are no CEO’s disproportionately represented among the dead. They were not working double shifts nor were they sequestered from their families so they could contribute to ending the pandemic.”

Liberation News also spoke to Doug Kauffman, a former discharge planner at Keck Hospital of USC, about his experience as a healthcare worker. He said: “Like all healthcare workers, I felt a constant sense of loss and rage from the beginning of the pandemic. …The breakdown of the capitalist healthcare system was dramatic. Placing a patient in a facility normally took a few hours and half a dozen phone calls [and] you could call forty facilities a day and not find a placement all week. Two-thirds of all facilities were being closed down due to mass outbreaks … among the most vulnerable patients, who were elderly, sick or disabled.”

As the pandemic continues into its third year, Preston Wood, a nurse, spoke to Liberation News about the prívate healthcare system’s “inability and lack of support to ensure safety of workers, patients and their families. Thousands of [workers] are leaving healthcare out of fatigue, stress, insufficient pay and frustration. Administrators are sending out confused information based on poor communication of the Biden administration.”

“This pandemic has clearly demonstrated an urgent need to replace our for-profit, anarchic healthcare system with a centralized, planned system that delivers services to all without regard to their income, status, race, or any other artificial division,” Kauffman added.

The private, decentralized U.S. healthcare system proved to be a disaster for healthcare workers and patients alike. This, however, was the case long before the COVID-19 pandemic.

Single-payer healthcare is popular and can save millions of lives

The U.S. working class already supports moving toward a single-payer system. A 2020 Hill-HarrisX poll found that 69 percent of voters support Medicare for All. Even before the pandemic, the insurance corporations were widely viewed as particularly heinous — charging hundreds of thousands of dollars for minor procedures and emergency room visits, lack of prescription coverage, and the denial of coverage to individuals with chronic conditions.

A 2020 article from The Journal of American Medical Association found an unprecedented spike in insurance companies’ profits while public health departments across the country struggled to even fund robust contact tracing. As of Jan. 26, the UnitedHealth group’s 2021 revenues spiked to $287 billion while 3.2 million remain uninsured in California alone — one out of 10 Californians under the age of 65.

As of Sept. 2020, a Pew Research Center poll found that “63% of U.S. adults say the government has the responsibility to provide health care coverage for all, up slightly from 59% [2019].”

Earlier iterations of expanding healthcare access like Obama’s Patient Care and Affordable Care Act of 2010 brought coverage to a greater share of people in the United States, but even so, 30 million people were left uninsured. Not to mention the ACA was exclusively for U.S. citizens and had stringent requirements for exceptions.

Although there are various definitions of single-payer healthcare, a common theme characterizes single-payer “as one entity that collects funds and pays for healthcare on behalf of an entire population.” (Liu & Brook, 2017) Under CalCare, that entity would be the state of California. Under Medicare for All, it would be the U.S. government, meaning the nationalization of health insurance.

Notably, CalCare would extend coverage to immigrants and refugees. Reem Zubaidi, a program manager working closely with refugee communities in San Diego, told Liberation News how single-payer care may change the game for refugee communities as it “could solve some pretty big issues, like lowering the financial barrier or … hesitance around providing documentation or fear of discrimination, uncertainty about their rights to access care. And this would in turn help to encourage people to seek preventive care rather than waiting for health problems to get bad before they go, which is a common problem.”

Liberation News spoke with Rachelle Compton, a nurse and CalCare activist in San Diego. She said, “Stop for a moment and imagine [if] you no longer had to worry about healthcare … to live in a society where they just really care about you instead of making you feel like you have to earn the right to be healthy through working.” With regard to the current system she added, “It’s ridiculous, it’s inhumane!”

Erika Feresten, director of Health Care for All – Los Angeles, a grassroots organization leading the fight for CalCare, told Liberation News about the wide reaching social impact of this bill on social issues of homelessness and severe need for mental health services. “It is a racial justice bill, it is a human rights bill, it is an environmental rights bill,” Feresten said.

Moving forward, a robust model of health services is going to become even more crucial as COVID-19 survivors experience chronic aftereffects of the disease and will need frequent care to maintain a fulfilling quality of life.

This is California’s shot

In a press statement, registered nurse and California Nurses Association president Cathy Kennedy said, “We nurses have been organizing to win guaranteed health care for all of the state’s residents for more than 30 years because we know this is the only way that our patients can get the care they need, regardless of the size of their bank accounts.”

Despite campaigning on single-payer healthcare, Gov. Gavin Newsom has so far refused to support CalCare. Instead, Newsom wants to include universal healthcare and a Medi-Cal expansion to cover all undocumented people in the next state budget — stopping short of single-payer.

Newsom and the California Democratic Party have taken donations in the hundreds of thousands from insurance companies like Blue Shield, Anthem and UnitedHealth.

Big players in the medical field such as the California Medical Association and the California Hospital Association both oppose CalCare. While this may surprise some, each organization is largely composed of private practitioners and private hospitals. CMA and CHA oppose CalCare on the basis that it will impact their patients’ individual choices, with little concern for the mass public benefits that would come from a single-payer system.

Feresten emphasized the need for an organized movement to pressure California’s assembly members to pass CalCare saying: “Politicians who are profiting off of the system need to be held accountable and make this [bill] a reality. We hope passing CalCare in California can inspire other states to take similar action in their states.”

We must put pressure on state assembly members and other public officials as they discuss and vote on CalCare. This may come in the form of community mobilizations, calling the offices of assembly members or even sending them postcards in support of CalCare. Without public pressure, the Democrat-controlled state government could again bend to the will of the health insurance lobby.

As the fight for single payer healthcare awaits its California assembly vote on Jan. 31, more and more working-class communities are realizing how disastrous the existing private system is. As this country approaches one million COVID-19 deaths, local and state governments still debate whether everyone should have healthcare. Passing CalCare would be a historic victory in the struggle for universal healthcare and an important step in making healthcare become accessible for all. Whether it be this year or another, quality, universal healthcare will be won by an organized, militant movement demanding a healthcare system that puts people over profits.

To keep up with the latest CalCare developments, follow Health Care for All – Los Angeles (@HCA-LA) across all social media platforms. 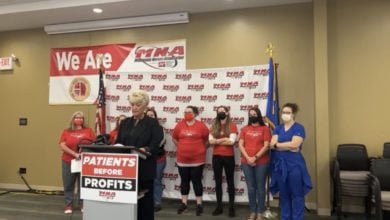