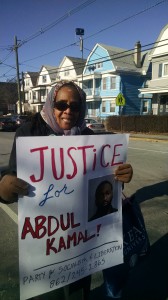 On Jan 10, 50 protesters braved the 15 degree Fahrenheit temperature, marching from Civic Square in Irvington, NJ, to the site where Abdul Kamal was murdered by three cops in October of 2013. People in cars driving by the march raised their fists in solidarity and often joined in with the chants that are echoing in similar protests across the U.S.

The three cops discharged their weapons 15 times—10 bullets struck Abdul killing him—as he was attempting to visit his children on Stanley Street. Abdul was not armed when he was killed.

“We are here to demand justice and here to keep the pressure on as the case is before the grand jury,” announced Larry Hamm, Chairman of the People’s Organization for Progress, the lead organization in the fight for justice for an indictment of the three cops.

The grand jury is currently meeting, reviewing testimony and evidence of Abdul’s murder by the cops and should reach a decision any day this month.

The Lincoln Memorial is at the corner of Springfield Ave. and W. Market Street in Newark, NJ.

“He was married and has two children: a daughter, 7 and a son, 11. They approached him and for whatever reason they started shooting and we don’t know why. But he went to see his daughter and we don’t know what happened between them shooting him and him going there. He didn’t do anything wrong. Whatever they thought he did wrong there was no reason for them to execute my son,” explained Michele Kamal, Abdul’s mother who is in the front of many marches demanding justice for victims of police terror in Northern New Jersey.

“And I want to continue to tell you we need to be vigilant in what we are doing. And we can’t stress enough, it is not just about Abdul Kamal. It’s about our Black men and women in general. It’s about what is happening around the country,” continued Michele at the rally.

“Hopefully, we’re praying for an indictment and if it comes back no bill we’re not gonna stop,” concluded Michele.