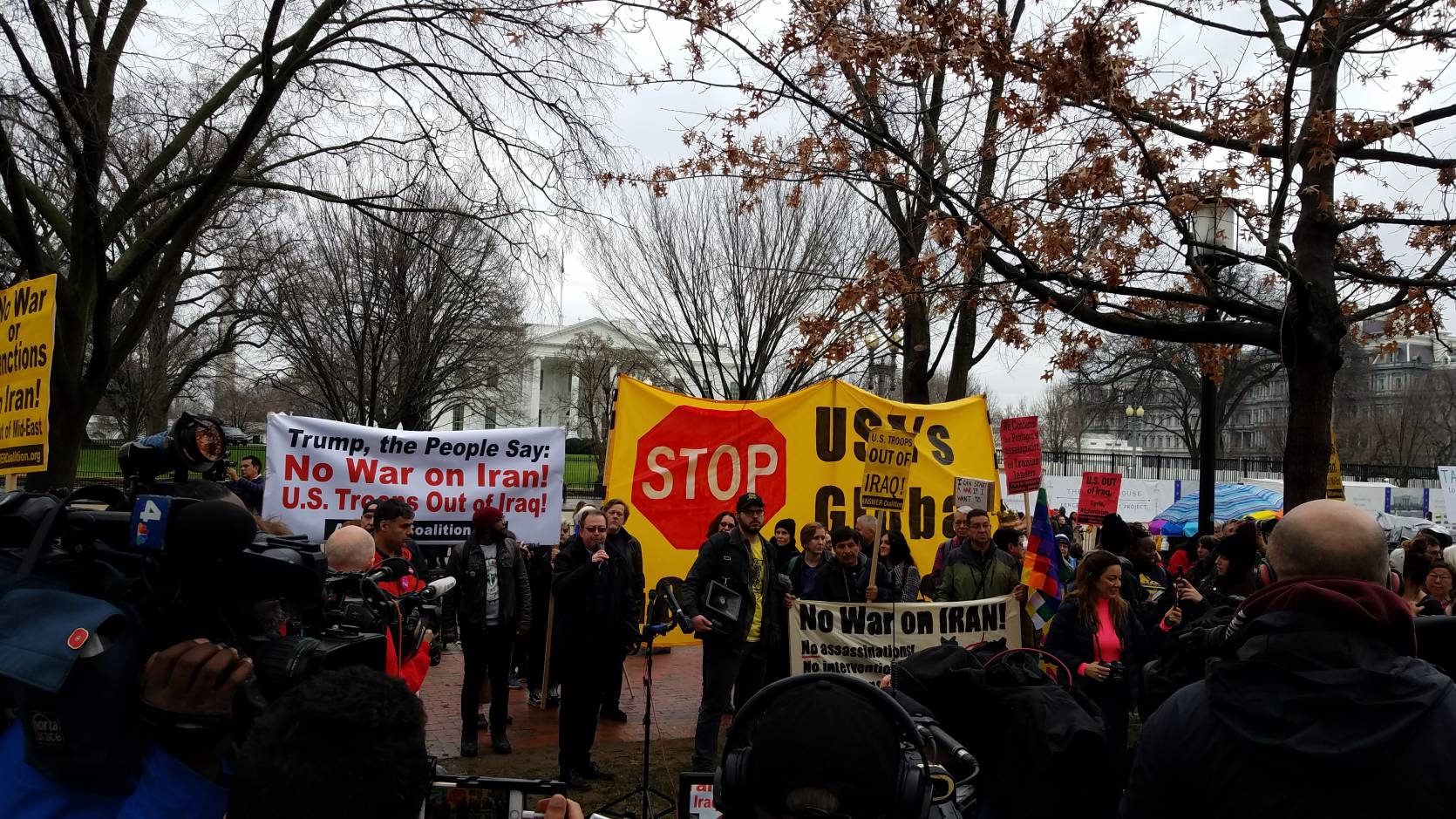 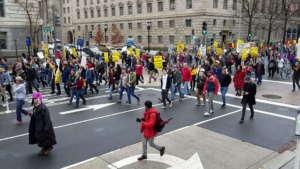 More than a thousand defenders of peace converged on the White House in Washington, D.C., on Saturday to protest the Trump administration’s reckless drive toward war with Iran and its violations of Iraqi sovereignty.

The assassination of Iranian Quds Force commander Gen. Qassem Soleimani on January 3 by a U.S. drone strike at Baghdad airport set in motion an international crisis that risks global war. However, Americans across the country came out in force the following day, joining more than 80 rallies organized by Code Pink and the ANSWER (Act Now to Stop War and End Racism) Coalition to demand the Trump administration end its war drive against Iran and remove U.S. forces from Iraq.

In Washington, D.C., protesters met in Lafayette Park next to the White House, representing a wide alliance of forces, including the Party for Socialism and Liberation (PSL), Code Pink, Popular Resistance, Black Lives Matter D.C., the Democratic Socialists of America (DSA), Veterans for Peace, the Black Alliance for Peace, and many more.

Many veteran activists told Liberation News it was the most vigorous anti-war movement the country has seen in more than a decade, and many from younger generations said they felt a moral compulsion to oppose the U.S. attacks on Arabs and Persians long targeted by the US war machine.

Jennifer from Port St. Lucie, Florida, told Liberation News that her Haitian family taught her the importance of “showing up for people when they’re needed.”

“Today I decided to show up for the people of Iran, the people of the Middle East, who have been under constant surveillance and violent oppression of US imperialism for decades,” they said. “It’s not right. It’s the same substance that surveils Black communities in the United States, the same substance that surveils LGBTQ and trans communities and it will not stand so long as I have a voice and I have freedom.”

Michael Marceo, a permanently disabled Vietnam veteran from the Washington, D.C. chapter of Veterans for Peace, told Liberation News “this is personal to me.”

“We’ve been fighting these endless wars for far too long and for far too many reasons that do not make sense any more and today, this is our chance to be able to stop another endless war,” Niranjana, a student from Duke University in North Carolina, told Liberation News.

“I came out here today because I refuse to stand by idly while the millions of brown lives overseas are in danger,” D.C. native Abel told Liberation News. “I think it’s incumbent, it’s a responsibility of any decent person to come out and stop this war by any means necessary.”

Actor and activist Jane Fonda joined the protest as well. Making recent waves with her “fire drill Fridays” climate change protests on the steps of the U.S. Capitol Building, Fonda told the crowd that the peace and environmental movements must unite into a single powerful force for change.

“The younger people here should know all the wars that have been fought since you were born were fought over oil,” Fonda said. “We can’t lose any more lives and kill people and ruin an environment because of oil.”

“The mask is off on U.S. imperialism,” Hajira Asghar, a student activist from George Washington University Students Against Imperialism, told the gathered crowd. “The media is parroting State Department lies. They want us to believe it’s imperative that we go to war; that poor Iranians, poor Iraqis, are our enemies; that we have to bomb them. How does war bring peace?”

“There is no evidence at all being provided to justify this attack,” journalist Max Blumenthal said. He describe Soleimani’s assassination as “revenge for his success at rolling back ISIS.”

“It’s up to us to be the real resistance, because the Democrats won’t oppose the war, just like they didn’t oppose the $738 billion” National Defense Authorization Act, which provides funding for the US war machine, he said.

Journalist Anya Parampil noted the U.S. war on Iran is nothing new, dating back to at least 1953, when the US and UK overthrew democratically elected Iranian Prime Minister Mohammed Mossadeq. It continued when Washington backed Iraq’s invasion of Iran in the 1980-88 war that cost nearly a million Iranian lives, and further still through the crushing sanctions that only ended in 2015.

However, those sanctions returned in 2018 when Trump unilaterally and illegally withdrew from the Joint Comprehensive Plan of Action nuclear agreement. Parampil described the sanctions as “economic terrorism against the Iranian people.”

As the crowd swelled in size, the protesters took their message of peace to the streets of the nation’s capital, marching down Pennsylvania Avenue to Trump International Hotel. As they marched their numbers grew still further, as passers-by joined them.

ANSWER national director Brian Becker told the crowd that the 80-million-strong Iranian nation are “a proud people,” noting “they will avenge their fallen.”

Becker noted a U.S. war with Iran won’t be like Iraq or Libya, which are several times smaller in both population and land area. Iran has spent decades preparing for a defensive war against the U.S., and by his actions, Trump has succeeded in uniting the Iranian people more than ever before.

“The stakes are very high,” Becker said. “Imperial arrogance by this imperial gangster Donald Trump will take the world to the brink of disaster … We have to build the kind of grassroots movement like we did in Vietnam to stop the war … We have to organize and be organized.”