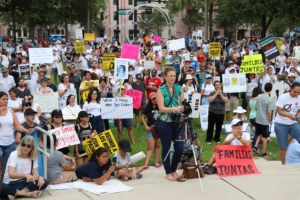 On Saturday, June 30, 3,000 people rallied at Joe Chillura Courthouse Square in Tampa to protest the Trump regime’s policy of “zero tolerance” towards refugees and migrants from Central America. The rally was called in conjunction with hundreds of others around the country as Trump’s crimes against humanity and violations of international law continue at the border. 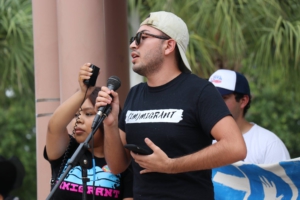 Here To Stay, a youth-led immigrant rights group from Clearwater, Florida, spoke out as Dreamers: “First it was the travel ban, and then it was DACA recipients and TPS holders under attack—we are still in limbo, we don’t know what’s going to happen to us—and now it’s our children. Our children are being separated from their parents at the border for simply wanting to have a better life. They’re being put into these detention camps, which are in other words concentration camps. There’s no other way to put it.”

“I came here 18 years ago from my country and not because I wanted to,” said Lurvin Lizardo, who was personally affected by the U.S.-backed coup in Honduras and the American government’s persecution of refugees. “They couldn’t find my mother and much of my family. The government of Honduras killed two of my brothers for suspicion of rebelling against the government. 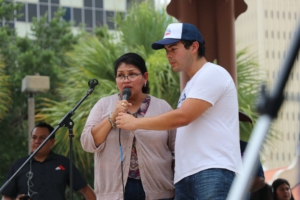 “One of them was 10 and they took his money. Today is the third anniversary of when they killed him,” she continued emotionally, pausing as the MC translated. “That happened because he was deported back to my country. There are many mothers who are crossing borders for fear that people are going to take their children. They’re coming here to protect their families and this corrupt government is trying to remove these families. They’re helping people harm and separate families.”

Jennifer Blanco came to the stage with her family: “My dad was recently deported February and we’ve actually been struggling very much. My mom is trying to work and earn ends meet. We have a church that’s been helping us with rent, we are very thankful for that. I also see how my dad is suffering over there. I feel like we could have done more for him to stay here.”

As she said this, one person yelled “We love you” from the crowd. Another demonstrator was so moved she came up to the microphone and briefly embraced the girl. 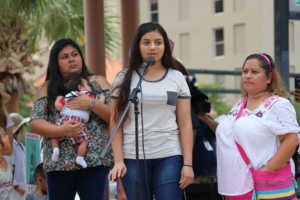 “He got deported for a traffic stop and he didn’t have any crimes,” continued Blanco. “He was put in ICE detention for three months and when he got out, my little brother Junior couldn’t even recognize him. He knew who he was, but didn’t know if he should hug him or not. That hurt a lot. My mother was pregnant when he was deported, and now he doesn’t even get to touch my brother. We have to use video chat on Facebook messenger. It hurts a lot to see that my family is torn apart.”

Leonardo Dulanto and Julissa Reynal spoke on behalf of Freedom Fellows, a coalition of the three grassroots groups Dream Defenders, Florida Student Power Network and Florida Immigrant Coalition. Both DACA recipients, they discussed the psychological effects of the persecution of immigrants and the systemic nature of mass incarceration and immigrant detention.

“We are both part of mixed-status families and so we feel personally affected by this issue, this crisis,” said Dulanto. “Mental health sometimes takes a backseat in our stories for fear that it might hurt the narrative. As a DACA recipient, I have experienced trauma and I’ve witnessed violence. I suffer from PTSD and have fought suicidal tendencies my whole life. Living here as an immigrant is traumatic enough, but what the families at the border are experiencing is cruelty and torture. This crisis is part of a bigger picture: mass incarceration and separation of our communities have all been created by corporations and paid politicians.” 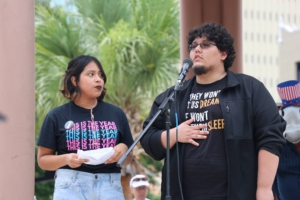 “These private prison companies have been lobbying to keep our communities in prison and detention centers, profiting off our bodies,” continued Reynal. “Geo Group is the second largest for-profit prison and immigration detention company. They are based here in our state right now in Boca Raton. They profit from putting our Black and brown communities in cages, and it’s time we expose them and the politicians that facilitate this cycle. Geo Group contributes to the political campaigns of both Democrat and Republican parties and pays lobbyists who influence the government. Florida spends $2.3 billion of taxpayer money each year on incarceration. Geo Group generates at least $122 million annually from Florida alone.”

Although Trump reversed his policy of family separation after international outrage, at least 2,000 children still remain separated from their families. According to pediatricians, these children could suffer negative psychological consequences for the rest of their lives. Many of these children, some of them toddlers, also have been forced to appear alone into court deportation proceedings. The movement is growing to free them and reunite them with their parents, as occupations and direct actions against ICE detention facilities spread across the country. 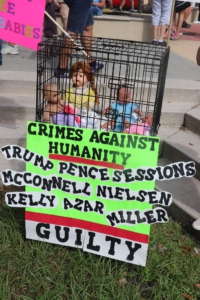 Trump’s executive order now mandates indefinite family detention under inhuman and degrading conditions. Meanwhile, he continues to illegally prosecute refugees seeking asylum. In doing so, he directly violates “non-refoulement”, a fundamental principle of international law that forbids a country receiving asylum seekers from returning them to a country in which they would likely be in danger of persecution based on protected grounds.

Members of the Party for Socialism and Liberation have joined demonstrations and occupations across the country to call for full rights for all immigrants and a new system that puts people over profit. While the Democratic Party attempts to portray itself as an alternative to the Trump regime, in reality the mass detention of child refugees began under President Obama, who, along with Secretary of State Hillary Clinton, deported at least 100,000 children seeking asylum back to Guatemala, Honduras, El Salvador and Nicaragua beginning in 2014. 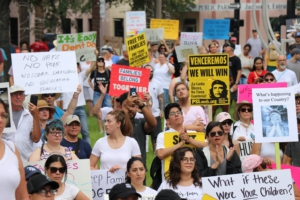 Both the Democrats and Republicans have supported the decades of imperialism leading to the destabilization of Central America, especially Honduras, where Secretary of State Clinton backed the 2009 military coup against democratically-elected president Manuel Zelaya. In order to end the crisis in Central America and the criminalization of immigrants, the movements must ultimately take on both imperialist, ruling-class parties. Only socialism can demilitarize the borders, bring peace to the region and make the world safe for workers and oppressed people.