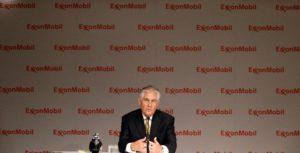 Donald Trump and his pick for Secretary of State, ExxonMobil CEO Rex Tillerson, are not our friends, obviously. Big Oil is an enemy of the planet and has a proven history of backing a bloody imperialist foreign policy.

The CIA, president Obama and a bipartisan group of senators are essentially accusing Trump and Tillerson of being agents of the Russian government. That’s quite astonishing if you think about it. Does that mean that some parts of the establishment are actually looking out for us or protecting us? No, especially considering that most of the allegations of Russia’s meddling are completely without evidence.

A media smear campaign using anti-Russia hysteria by major power brokers in Washington against an incoming president is yet another sign that the people on top of this country care more about jockeying for power and keeping America on top than they do about solving the climate crisis, poverty, police brutality, the refugee crisis, bringing peace to the Middle East or any of the multiple crises we face.

Make no mistake, Trump and Tillerson are in fact real life traitors to the human race. Every day, they act against the safety, security and interests of the majority of the people living in the United States and of billions across the globe.

Trump and Tillerson are agents of profit and plunder—not Russia. The fact that Tillerson has formed a profitable relationship in the name of Big Oil with president Putin and Russia is not what principally defines him as a traitor.

Because they put profit before the people, Tillerson and his kind, if they felt that their ownership of much of the world’s wealth was really under threat by workers here in the United States, they would work with any world leader, including Putin, that would help them put down a working-class rebellion and maintain their wealth.

If the capitalists have allegiance to any thing, it is to their own personal capital and their right as a group to own the world’s wealth. A Big Oil CEO like Tillerson is not in any way concerned with Russia’s sovereignty or Russia’s goals. Without giving it a second thought, he would try to overthrow the Russian government if it increased ExxonMobil’s ownership of the world’s energy resources. ExxonMobil’s relationship to Putin is governed by the balance sheet and not the peace and security of any member of the human race.

In fact Big Oil, Wall Street and the political elite of this country are not in any way concerned about the sovereignty of the United States or the security of the planet. A perfect example of this is when Hillary Clinton, as Secretary of State in the Obama administration, signed off on billions of dollars in military aid to Saudi Arabia even though she knew those weapons were going to Al Qaeda and ISIS–all so the military industrial complex can continue to rake in enormous profits. Another perfect example: Big Oil and Big Auto continued to work with NAZI Germany during World War II. Ford and General Motors plants in Germany churned out thousands of trucks and planes for the NAZI war machine during the war. Standard Oil helped build Auschwitz in order to produce synthetic rubber using forced labor.

For people like Trump and Tillerson it is profit first and to hell with the planet and its people.

Though it is not entirely clear what Trump’s foreign policy will be—and Tillerson is a foreign policy unknown—all signs are pointing to a Trump regime looking to be more aggressive toward Iran and China while possibly adopting a more friendly tone with Russia. A Trump regime full of white supremacists, aggressive capitalists, warmongers and climate crisis deniers will certainly maintain if not expand the ruthlessness of U.S. foreign policy.

Of course, the Trump regime is not a stalwart anything and will have to contend with a Washington foreign policy establishment that has been gearing up for a campaign against both Russia and China. Hillary Clinton was the consensus pick of the neocons, the Pentagon, and the big players in the U.S. foreign policy establishment because they have all decided on a more assertive and antagonistic approach to both major powers. In part, the anti-Russia hysteria is meant to pressure Trump to fall in line with this very dangerous approach to international relations.

The United States is threatening Russia at a time in which Washington is facing the possible undoing of its post World War II order as a result of the United State’s destruction of the Middle East, backing of Al Qaeda terrorists in Libya and Syria and the long lasting effects of the 2007 global economic crisis. Greater antagonism against Russia and China could lead to a major power confrontation, including a possible World War III.

Why we must resist the anti-Russia hysteria

We are not pro-Russia or pro-Putin. But we do reject the anti-Russia hysteria.

With only the most circumstantial evidence, the CIA and the Obama administration are blaming Russia for the Trump regime. We do not blame Russia for Trump. We blame capitalism for Trump.

We blame the Democrats and Republicans for carrying out decades of capitalist war and austerity that is destabilizing the world, and for advancing absolutely no strategies to solve the world’s problem. It is the actions of the leaders of this country that have led to the Trump regime and now most of the ruling class is lining up with the new administration so that they can cash in on what they hope will be a more unfettered capitalism and imperialism.

The anti-Russia campaign relies on a basic distortion of Russia and its history. The people of Russia are glad that Trump has won. That is true. They are glad because they fear a U.S. and European war on their homeland and they believe Trump will be friendlier than Clinton would have been.

The fears of Russians are real fears based on facts. NATO is carrying out repeated military exercises on its borders. NATO plans to install military bases on its border and is encircling Russia with missile batteries. Though the United States is antagonizing Russia, Russians, in fact, have little popular desire to antagonize the United States. They know what world war is like. The Soviet Union bore the brunt of World War II, losing 30 million people to a NAZI regime that had plans to exterminate the Russian race. In the face of U.S. threats, Russia has started to and will continue to defend itself from U.S. and European aggression.

We need a movement that defends immigrants, Muslims, women, people of color and LGBTQ people. We don’t need a movement that goes along with the Big Lie that the United States needs to be defended from an outside existential threat. We are being threatened and attacked by the capitalists and not Russia or Putin. Our enemies are Trump, Tillerson and the entire capitalist class who have no regard for the safety and security of the people of Russia or the people of the United States or for the planet or for the future of the human race.

We must build an anti-Trump movement that is directed at the system and not Russia. We must not build a movement that seeks to replace Trump with a different group of imperialist leaders who would drive us toward a war with Russia. We must replace Trump with a socialist government of, by, and for the people that can solve the problems created by capitalism through cooperation and sharing.

The Trumps and Tillersons of the world and the political elites of both establishment parties use the illusion of a “great America” to keep us under their boot. Now is the time to resist all efforts at gathering the people of this country under a false umbrella of American exceptionalism and fight for a better world with no more Trumps and no more racism and war.