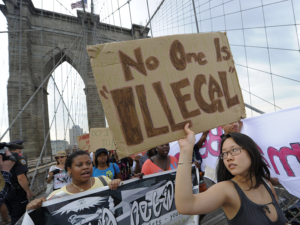 President Trump’s proposed budget would spend nearly $5 billion on putting one of his many disgusting executive orders into action: deporting undocumented immigrants and building a border wall.

Throughout the election campaign, Trump spewed hatred at Mexican and other Latino immigrants. Six days after his inauguration, he issued two executive orders targeting those who cross into the United States along the southern border, accusing those who are undocumented of being “a significant threat to national security and public safety” and blaming those crossing the border for drug trafficking. He ordered that a wall be built and that thousands of additional Border Patrol agents and others be hired to staff the wall and catch those who cross. He also threatened sanctuary cities with loss of federal funding if local law enforcement officers did not act as immigration officials.

The budget proposal indicates that the Trump administration now wants to allocate money to carry out this terror campaign. It designates $2.6 billion to continue the border wall and $1.5 billion to detain and deport those who are undocumented. Hundreds of millions of dollars were also requested for a whole slew of personnel needed to implement the operation.

The budget included funds for 500 new Border Patrol agents and 1,000 Immigration Customs Enforcement officers. Dozens of judges, prosecutors, and U.S. Marshals are to be hired to accelerate the deportation process and more lawyers to speed up buying the lands along the border in order to build the wall.

This is just one of the latest moves in a drive to terrorize those who have crossed the border into the United States to find stability and work and to join their families. With stories of ICE officers staking out schools, shelters, churches and court houses, sections of immigrant communities have completely withdrawn into their homes in fear. One Colorado law office reported that the same day the executive order was signed in January, four women dropped their cases against their physically and violently abusive partners for fear of being deported themselves.

But others are organizing to defend their communities against ICE and any who play a role in ripping apart families, neighborhoods, and schools by enabling deportations. They are creating action phone trees, organizing “know your rights” workshops, and organizing to take to the streets.

Everyone should fight back against the racist and xenophobic right-wing agenda of Donald Trump. But we must also fight to build for a society where workers are not terrorized and exploited, nor pitted against each other, for profit.

Under a people’s government, under socialism, one of the immediate actions would be to grant full amnesty and legal status to all immigrants. All workers in the country would have access to the same full rights, including the right to a job, a home, education and healthcare. Any laws, agencies and so on tasked with enforcing a second-class status would be eliminated. This would include dismantling ICE and overturning all anti-immigrant laws and executive orders.

It is not criminal to travel to the United States to find work, or for immigrants to break unjust laws in order to support themselves and their families. What is criminal, and must be stopped, is the U.S. imperialist intervention in other countries. Whether through militarism or neoliberal trade agreements, this manipulation has time after time crippled economies and states throughout the developing world. Thus, another immediate task of a people’s government would be to shut down all covert and destabilization campaigns, close military bases abroad, and cancel debts and exploitative trade agreements.

We must resist giving in to fear and fight back against the escalating racism. We must think, above all, that we can win.

Trump cannot hold us back when we are united and fight together.