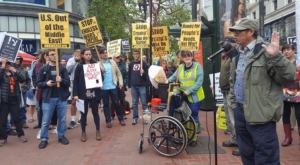 As part of a national call by the ANSWER Coalition (Act Now to Stop War and End Racism) for demonstrations against the illegal bombing of Syria by the U.S., people rallied in downtown San Francisco at Powell and Market St., the traditional site for protest actions. Hundreds of passersby stopped or heard speakers and chants in opposition to the latest act of aggression and murder by U.S. imperialism.

Speaking on behalf of the ANSWER Coalition, Richard Becker asked the question, “How is it we know what we know? While we see terrible images of children and adults in Syria who are suffering the effects of poison gas, and we don’t dispute that, what we say is and question is where did that really come from?  Did it make any sense for the Syrian government, at a time when it is winning the war, scored a major victory in Aleppo along with their allies, would use the one weapon that they knew would bring attacks upon them from around the world and the United States, I don’t think so. What about images we don’t see? What about the 200 plus people killed in one U.S. raid in Mosul in Iraq? We have to talk to other people about this. We don’t see the effects on Syrian civilians of U.S. bombing before the cruise missiles.”

George Wright, a retired professor from Chico State University with a focus on Africa said, “What are the objectives on the part of the United States. I think what is really important is to recognize it is not just Trump. It is a bi-partisan project. Every administration, whether Republican or Democratic, for the last 25 years has been involved with the specific objective since the collapse of the Soviet Union in 1991, the opportunity for complete global domination. It had to eliminate any secular nationalist regimes in the Middle East. What we have been watching is a bi-partisan effort at regime change in the Middle East.”

Participants in the action were clear in their opposition to the latest crimes by the Pentagon. Kathryn, a senior at Mills College said, “I physically want to show that I am against what is happening, specifically using military force…”

While the Trump administration plans to cut billions of dollars from social services that serve poor and working people, it is greatly increasing the budget of the U.S. military. Anger at this was expressed by one protester, Frank, who explained why he was at the rally, “I am out here today in defiance of the harsh reality of war and how it affects the working class and poor folks in this county where we are spending millions of dollars that could have easily gone into food, shelter and the well being of our people instead of being spent on the destruction of other people.”

Gloria La Riva, who was the presidential candidate in 2016 of the Party for Socialism and Liberation, addressed the crowd, “We see a lot of suffering in America today, the people without homes in cardboard boxes, people who don’t have money for medicine, people with no jobs, seniors and others who are going to be affected by cuts in Meals on Wheels that what Trump was announcing the other day, $54 billion more for war means you’re not going to eat, means you’re not going to live the way you have been, if you have been at all. Yet the Democrats would have done the same thing but on a different scale. Our movement is more important than ever.”

Nazila Bargshady, speaking for ANSWER reminded the crowd how the United States government has used lies and misinformation to sells war to the public. She explained, “This is obviously a repeat of the war in 2003, the war in Iraq and the weapons mass destruction, when the Bush administration said Saddam Hussein in Iraq is using weapons of mass destruction against his own people. It took over eight years of occupation and bombing of Iraq by the U.S.administration and the killing of over one million people, mostly children, after fourteen years they could not find any evidence of weapons of mass destruction. That was a big lie. Now who killed a lot of people? U.S. bombing killed a lot of people.”

Roberta, read part of a statement on behalf of BAYAN-USA, a coalition of Filipino organizations, “We condemn Trump’s bombing of Syria and demand an end to U.S. war mongering and intervention, which will never help resolve the problems of the Syrian people.”

The rally ended with many participants going to the ANSWER Coalition office where a fuller discussion on the nature of the U.S. role in the Middle East and how to build the movement against war and imperialism continued.