A group composed primarily of mid-level officers of the Turkish Armed Forces attempted to carry out a coup the night of July 15 and early in the morning of July 16. They were able to capture several strategic locations before being driven back by police and other forces loyal to the reactionary regime of President Tayyip Erdogan and his Justice and Development Party (AKP).

Click here to read a statement from Communist Party, Turkey

Fighting primarily took place in Istanbul and Ankara, the most important big cities in the country. Tanks and troops fanned out, momentarily capturing key motorways, government offices and media outlets. The coup forces were able to lay siege to the parliament building and carry out airstrikes against police headquarters.

The rebelling officers failed, however, to capture top government leaders. In a surreal moment, President Erdogan, who was on vacation, appeared on live TV via Facetime and assured that the AKP remained in control. He called on his supporters to take to the streets to protest – but staying true to the cowardly nature of tyrants, some reports indicate that he was simultaneously exploring the possibility of securing safe haven in Greece or Germany.

Large numbers of the AKP followers did in fact take to the streets and confronted tanks and soldiers following this message. The country’s clergy quickly responded and issued a special call to prayer to mobilize supporters of the Erdogan regime. It is important to distinguish the class and political character of the crowds that came into the streets on July 15 and the hundreds of thousands of progressive and working class people who have taken part in various movements to resist the AKP’s reactionary project, including the heroic June 2013 “Gezi Park” movement.

The crowds on the streets of Turkey Friday night were of a purely reactionary, lynch-mob character, some of them armed and acting in close coordination with the police. It is important to remember that the AKP and Erdogan have played a critical role in the rise of the so-called Islamic State by supporting, arming and funding IS.

Erdogan returned to Istanbul late Friday night, and the pro-coup forces began surrendering. It is important to note that the Turkish military is composed primarily of conscripts, who have no choice but to join. Many enlisted soldiers were told by their commanders that they were simply participating in drills, and only later realized that they were being used in a coup attempt. One of the soldiers in Istanbul was beheaded by the AKP supporters, reminiscent of the style of Islamic State terror in Iraq and Syria.

The Obama administration issued a statement after it became clear that the coup would likely fail, urging respect for the “democratically-elected government of Turkey.” It would be a cruel irony to allow the AKP regime – or their opponents who attempted the coup – to claim the mantle of defenders of democracy.

Who are the Gulenists?

The Gulen movement had been an important ally of the ruling AKP government between the time it came to power in 2002 until 2013. They have colluded with the AKP, held important positions in the state apparatus and exercised influence through a vast network of media and educational institutions.

The basis of their unity with their former partners in the AKP was a shared desire to destroy the 1923 secular republic and replace it with a religiously-oriented state that rolls back democratic rights.

As the AKP reoriented the nature of the state, it eliminated most of the followers of the progressive secular “Kemalist” tradition – named after the founder of the Republic of Turkey, Mustafa Kemal Ataturk – from the judiciary, state security, public education and even sections of military. This vacuum was filled in many cases by Gulenist cadre.

The Gulenists were a key force in the 2010 constitutional referendum that essentially expanded Ergodan’s judicial powers in the name of democracy and cleaning up the remnants of the deep state. It was in fact a pretext for Erdogan to charge a wide range of opposition forces and put them in jail.

As has been the case throughout his career, Erdogan has been unable to share power even with his most like-minded allies. The exact circumstances that sparked the rift are still unclear, but for the last several years the AKP-Gulenist alliance has turned into a bitter rivalry. Where they were once close partners in the past in pushing forward reactionary policies that destroyed the secular nature of the republic coupled with a systematic ideological drive to Islamicize all aspects of social life, the AKP has now focused its attention on expelling the Gulenists.

A wave of repression

Thousands have been arrested so far in a massive sweep carried out by security forces after the coup was put down. The judiciary, military and other key state institutions are being purged of remaining opponents of Erdogan and the AKP. This reportedly includes dozens of generals.

Many of these people likely were involved in the coup to one extent or another, but others are undoubtedly targets of opportunity who have been in the AKP regime’s crosshairs for some time. There is a possibility that the death penalty could now be reinstituted in the country. It may not be far-fetched to say that Erdogan will use the failed coup attempt as the pretext to push forward his own reactionary coup in the name of defending democracy.

Erdogan has long held ambitions of an “executive presidency.” This means fundamentally reforming Turkey’s constitution so that near-dictatorial powers are vested in the presidency. Under the current arrangement, the presidency is technically a ceremonial role with power primarily held by the Prime Minister – a position Erdogan occupied until 2014.

It is unclear how extensive the campaign of repression will be in the wake of the coup. The bourgeois political and business establishment in the country has unanimously condemned the attempted coup.

While the AKP currently lacks the votes in parliament to force through the constitutional changes it desires,  that equation could change soon given that the whole bourgeois political establishment including the three main opposition parties, Kemalist CHP (Republican People’s Party), the right-wing MHP (Nationalist Movement Party) and Kurdish opposition party HDP have all expressed support for the AKP’s so-called democracy.

Prior to the coup, the AKP was already whipping up popular sentiment against the pro-Kurdish People’s Democratic Party (HDP). Following his defeat in the June 7, 2015 general elections, to regain the AKP’s parliamentary majority Erdogan reignited the government’s brutal war against the oppressed Kurdish people concentrated in the country’s southeast.

The abrupt end of the peace process with the Kurdistan Worker’s Party (PKK) was consistent with Erdogan’s record of reckless adventurism. The AKP government is a principal sponsor of the right-wing religious terrorist organizations that are leading the fight to overthrow the Ba’athist government led by President Bashar al-Assad in Syria. For years, it allowed IS and its predecessor organizations to operate supply lines into Syria from Turkey and recruit on Turkish territory in an almost open manner.

Last November, the Turkish military shot down a Russian plane that had at most violated Turkish air space for a few seconds while it was participating in the country’s mission to support the Syrian government. This provoked a profound diplomatic crisis that raised the specter of a catastrophic escalation. Now that Erdogan appears to be softening his position on Syria – making moves to normalize relations with Russia, for instance – the Turkish people are suffering from the inevitable blowback from his incredibly dangerous and foolhardy maneuvers for regional dominance.

It is crucially important to reject all U.S. attempts at intervention in Turkey – the “eastern flank” of NATO – where a succession of murderous CIA-backed coups have repressed the people’s aspirations for democracy and liberation for decades. Difficult days are ahead for all progressive people in Turkey. AKP will surely use the resulting conditions of the failed coup to its benefit to the fullest extent and will tighten its dictatorial grip on the whole country, escalating its already brutal repression of all progressive and leftist movements to a new level.

As tensions are inflamed and the situation becomes even more dangerous, the Party for Socialism and Liberation stands in solidarity with our comrades in Turkey fighting for an end to the domination of their country by right-wing, pro-imperialist forces – whether that is Erdogan and the AKP or another variant. 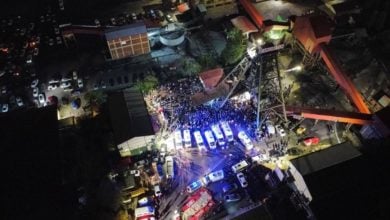