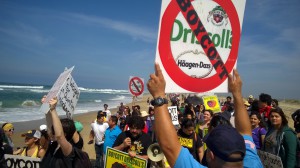 Sin justicia, no hay paz! / Without justice, there is no peace!

March 17 marked the one year anniversary of the declaration of a strike by farm workers from San Quintín, Baja California. The strike called by the Alianza de Organizaciones por la Justicia Social (Alliance of National, State and Municipal Organizations for Social Justice) is demanding an end to rape and sexual harassment in the fields, wage theft, child labor and employer retaliation, as well as a raise of the daily wage from an average of 150 pesos ($10) to 300 pesos ($20).

In a statement released prior to the march, the Alianza stated :

“This march is to commemorate the first year of the start of the strike in San Quintín. To publicize  that after a year, the historic work stoppage where thousands 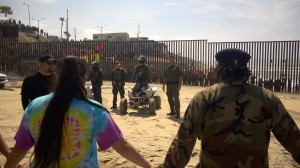 of workers left the camps and took to the streets demanding better working conditions, employers have not listened in good will to our demands and established measures to ensure our labor and human rights are respected in accordance with the law. On the contrary, we have been harshly repressed by forces from the three levels of the Government in complicity with businessmen. We were imprisoned, injured, we have suffered reprisals, mass dismissals, constant threats in the fields, increased workload for the same salary, are obligated to join corporate unions that have never represented us, in exchange for keeping our jobs, among other labor abuses.”

One year into the strike that includes over 50,000 workers, a march from San Quintín to the US-Mexico border began. The three-day march of about 200 miles to the heavily militarized border sought to 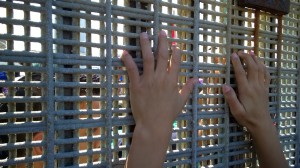 emphasize the international nature of the struggle. Since the passing of NAFTA in the 1990s by Democratic president Bill Clinton, multinational corporations have exploited conditions on both sides of the border to obtain cheap labor and avoid paying taxes.

The workers of San Quintín and their supporters arrived at Tijuana on March 20 and were met on the opposite side of the border by various supporters, including representatives of Labor Council for Latin American Advancement, A.N.S.W.E.R. Coalition, Party for Socialism and Liberation, Brown Berets of Fresno, Watsonville, and Sacramento, and Familias Unidas por la Justicia along with community members from throughout the state of California.

At the center of the fight is the Driscoll’s corporation, one of the largest producers of berries in the Americas and an active member of Agricultural Council of Baja California, the association of growers fighting to crush the strike. Driscoll’s berries are found at grocery stores throughout the United States including Costco, Safeway, and Whole Foods.

Driscoll’s in particular has been documented as being guilty of numerous workplace abuses including paying slave wages, providing unsafe housing, and engaging in human trafficking and systematic sexual abuse. The campaign to boycott Driscoll’s was spearheaded in 2014 by farm workers in Washington state who went out on a strike that is still ongoing. Since then, numerous demonstrations have been held across California in support of their calls for justice and a boycott of Driscoll’s berries until the demands of the workers on both sides of the border are met.

In San Diego, the march to the border began about 45 minutes away. As the march began, led by a “Dump Trump” banner, chants of “Boycott Driscoll’s!” and “Vive los trabajadores de San Quintin!” could be heard from the crowd. The second stretch of the march through beach sand brought increased determination to the demonstrators as the border could be seen in the distance. As they approached the border they were met by Border Patrol agents in SUVs and ATVs who halted the march with threats of mass arrests. A large speaker allowed the group to communicate with supporters on the Mexican side of the border and statements of solidarity and chants were exchanged.

Somos un pueblo, sin fronteras! / We are one people, without borders!

Following this, the crowd moved along the border to the visitation area that is limited to 25 people at a time who were allowed to go up to the large metal fence that separates Mexico and the United States. This border is the result of the signing of the Treaty of Guadelupe Hidalgo in 1848 that followed a brutal expansionist war by the United States at the height of the genocidal policies of the doctrine of Manifest Destiny.

As families on each side communicated through the fence and exchanged well wishes, the artificiality of the border was clear. What was once a busy route among the Indigenous populations of the Americas has become an over policed military encampment that can be crossed only with a set of documents
that many have no access to. Through the fence, there was space enough for only a pinky.

“The only thing that divided us and the Indigenous oppressed workers yesterday was this racist wall. I don’t speak much Spanish but I was able to ask how they were and got someone to tell them workers solidarity, the wall will fall. I couldn’t say much, but I felt them. I felt the Brown and Black unity. We touched pinkies as a way to hug and be in solidarity with them. It was extremely disheartening to see a group of people being blocked by a wall telling them they’re illegal and don’t deserve rights. It reinforced why I do the work that I do.”

The workers struggle has no borders

The international class consciousness of the working class is central to obtaining justice for oppressed and working people across the globe and establishing a system based on the needs of the people instead of the profits of corporations. The ruling class is highly effective in their organization of force to counter the demands of workers asking for a fair share of the wealth they are responsible for producing. Unity across national, ethnic, and religious lines in the struggle for equality is necessary to replace the corrupt capitalist state. Until all workers have a safe workplace and a living wage, the struggle will continue for justice.