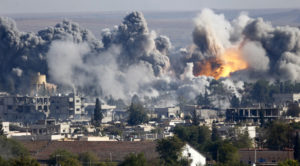 On Sept. 17, U.S. fighter jets bombed Syrian government forces. Their target was a military base in Eastern Syria at Deir ez-Zor. The bombing was followed by an ISIS attack on the Syrian army positions. According to Syria’s military, the U.S. air raid killed 62 soldiers and wounded over 100 more.

In a statement, the Syrian government called the strike a “serious and blatant attack on Syria and its military” and “firm proof of the U.S. support of Daesh (ISIS) and other terrorist groups.” Russia called for an emergency meeting of the United Nations Security Council to discuss the U.S. attack.

But the U.S. reacted angrily to the call for an emergency UNSC meeting. Referring to the Russian move, U.S. ambassador to the UN, Samantha Power, asked: “They’re calling this emergency meeting? Really?” Power called the Russian call for a Security Council meeting a “stunt.” To Washington, the bombing of Syrian forces and killing 62 people should not be seen as that big of a deal. Washington would have liked Syria to settle for an official reading a statement saying, “The United States has relayed our regret through the Russian Federation for the unintentional loss of life of Syrian forces.”

Was this really a mistake?

It is no secret that the United States has long pursued regime change in Syria. Washington has provided extensive support to the Syrian “democratic” opposition. While Hillary Clinton was Secretary of State, Washington even organized a political opposition force abroad, calling it the Syrian National Council. It is also well-known that U.S. client states in the region, from Turkey and Jordan on the borders of Syria, to arch-reactionary Gulf monarchies like Saudi Arabia and Qatar, have long armed and funded Syria’s opposition forces of all stripes.

So the Syrian government, or even a casual observer of the Syrian civil war, can be forgiven for suspecting a new turn in U.S. policy and a possible launch of direct U.S. attacks on the government forces. It is not paranoia, but knowledge of the history of U.S. intervention in the region, that would feed into that suspicion.

But Washington is adamantly denying any such intention. According to a U.S. Central Command statement, the United States bombed Syrian government forces in error, thinking they were ISIS forces. The CENTCOM statement reads, “The airstrike was halted immediately when coalition officials were informed by Russian officials that it was possible the personnel and vehicles targeted were part of the Syrian military.” It added, “Coalition forces would not intentionally strike a known Syrian military unit.”

The statement makes it clear that, at least for the time being, the United States is not going to engage in a bombing campaign against Syria. Still, the conditions of the attack make the claims of a mistake somewhat suspicious.

In military campaigns, there are times when a hotly contested area rapidly changes hands, making erroneous aerial bombings more likely. But this was not a contested area. Much of eastern Syria, a sparsely populated area, has long been under ISIS control. The Syrian Arab Army has held this base deep in ISIS territory. The base and the surrounding area did not change hands in the hours leading to the attack.

Explaining the error, a U.S. CENTCOM official said that the U.S. had been watching these forces “for a few days” thinking they were ISIS. It would be a major error for the U.S. military to watch forces on the ground “for a few days” and not be able to tell whether they were ISIS or Syrian military? Satellite imagery, to which the U.S. military has abundant access, can provide extremely detailed images from the ground.

Whether a mistake or an intentional testing of the waters, the bombing is the product of a continued U.S. drive for regime change in favor of a “democratic” opposition. Russian President Vladimir Putin put it this way, “This comes from the problems the U.S. is facing on the Syrian track—they still cannot separate the so-called healthy part of the opposition from the half-criminal and terrorist elements.”

Both Trump and Clinton promise a more robust future U.S. policy on Syria. With the Free Syrian Army, the U.S.-supported “good” terrorists, now reduced to a marginal player in the civil war, there are no remaining good options for U.S. imperialist interests. More funding, arms and training for the FSA is not going to change the balance of power any more. This is what makes a possible U.S. invasion of Syria a serious danger, particularly after the elections.

Progressive and anti-war forces in the United States need to clearly oppose U.S. intervention and expose the demonization campaign against Bashar Assad and the Syrian state. To this day, some liberal forces, including some self-proclaimed socialists, continue to join the U.S. government in demonizing the Syrian state, purportedly to stand with the “democratic” opposition. Being duped by the U.S. government into believing that an organized democratic force existed might have been forgivable in the first few months of the civil war.

Now, over 5 years into the Syrian civil war, it is abundantly clear that there is no organized opposition force on the ground that is progressive or democratic. The imaginary independent progressive forces control exactly zero territory and have exactly zero chance of taking state power.

On the one side of the civil war is an independent and secular state, with all of its inconsistencies and contradictions. On the other, there is an array of jihadist forces, each more reactionary than the other. Even if one considers the U.S.-bankrolled FSA to be a progressive force, the FSA is not a realistic alternative. Today, and in the coming months, the U.S. anti-war forces should unconditionally oppose U.S. intervention in the Middle East. U.S. Hands off Syria!