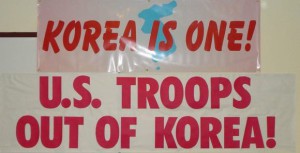 The long-term belligerence of the United States and its imperialist partners in Europe and Japan, acting continuously with hostility against North Korea since the Korean War, has escalated once again.

Using the United Nations as its cover, Secretary of State John Kerry recently called a UN special session devoted to promoting a long trumped-up list of alleged violations of human rights by the People’s Democratic Republic of Korea. Only countries that blindly follow U.S. policy were invited to the recent hearing, even though it took place at the UN.

A draft resolution was circulated by the European Union in late October, undoubtedly at the behest of the United States, encouraging the UN Security Council to refer the North Korean government to what is known as the “International Criminal Court” (ICC) in The Hague, Netherlands, an imperialist tool of propaganda and repression. The purpose of the resolution is to continue a campaign of lies about the government of North Korea to order to demonize and isolate and punish the DPRK for refusing to surrender its sovereignty and right to self-determination.

The International Criminal Court is in fact not real court at all, but a fake court that has been used as a tool by the imperialists against those resisting imperialist aggression.

The Korean War is not over

The Korean War, that began on June 25, 1950, more than half a century ago, has continued until this day. The armistice agreement signed on July 27, 1953, has never been replaced by the peace treaty, and so the war continues, in a very real sense, because the U.S. continues to threaten North Korea, engages in war exercises that simulate the destruction of North Korea, imposes draconian economic sanctions that are designed to destabilize and weaken North Korea, and continues a non-stop campaign of aggression built on outrageous lies and falsehoods, including projects such as the recent report.

Using extreme and inflammatory language full of references to such things as torture, rape, extermination, murder – without a trace of evidence – the report is designed to conjure up frightening images of sensationalized and false scenarios. The author, John D. Kirby, and retired Australian judge, and, according the U.S. State Department, an “expert” on human rights issues in the DPRK, claims to have collected the testimony of witnesses and victims of abuses who had “escaped” the country.

Coincidentally, at the same time as the report was issued, Kirby was presented an award by the U.S. ambassador the United Nations, Samantha
Power, as if to put a stamp of approval on the report and the U.S. attempt to bring the issue to the UN Security Council.

This effort is similar to an effort earlier in 2014 to refer Syria, a country that also has defied U.S. policies of aggression and attempts at regime change, to the same so-called court. This attempt was thwarted by the veto power of Russia in the UN Security Council.

Referring to the “hostile forces” behind the anti-DPRK “human rights resolution,” the Permanent Mission of the DPRK responded quickly to the Sept 23 meeting at the UN that was hosted by the United States. A press release issued by the Foreign Ministry stated that “While the DPRK has made earnest and sincere efforts to promote international dialogue in the field of human rights, the hostile policy of the U.S. has been to tarnish the image of the DPRK with the aim of bringing down its social system at any cost.

“By convening the recent meeting, where the lies and slanders of the report were aired, the U.S. is enacting yet another smear campaign against the DPRK, and is turning its face away from the DPRK’s efforts to establish an international dialogue around the issue.” The statement adds that the U.S,
by circulating a prejudiced and groundless document, has once again violated the UN Charter.

The statement goes on to point out the blatant arrogance and hypocrisy of the United States in undertaking this campaign. “The U.S. is disqualified,” the statement continues, “to refer to the human rights situation of other countries due to the abuses of human rights it commits, including spying on its own people through wire-tapping and surveillance, killing innocent people with drones, supporting Israeli atrocities in Gaza, racial discrimination inside its borders, the use extreme violence by police, the maltreatment of prisoners, widespread gun-related crimes, violence against women, etc…” All this, in summary, disqualifies the U.S. government from talking about alleged human rights violations in countries where it is seeking instability, and regime change.

If the U.S. succeeds in bringing this hostile program of referring North Korea to the international court, to the Security Council, as it intends to do within the coming months, the lies and true motivation of the United States to weaken and overthrow the socialist country of North Korea will require solidarity with the DPRK from all those around the world who oppose the U.S. drive for wealth and power, in Asia and everywhere.