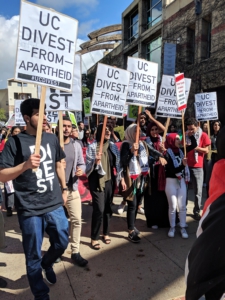 On March 14, union workers and students from different University of California campuses came together to protest outside of the annual UC Regents meeting that took place at the University of California Los Angeles.. Although representing different struggles, AFSCME Local 3299, California Nurses Association, Student Labor Advocacy Project and the system-wide coalition of Students for Justice in Palestine stood in solidarity to protest students’ and workers’ disenfranchisement by the governing board of the public institution.

As the UC Board of Regents convened on the Los Angeles campus early in the morning the week before final exams, students and workers mobilized outside the meeting, chanting “Money for workers and education, not for wars and occupation.” Joined by many different organizations that traveled from UC Merced, Irvine, Santa Barbara, Santa Cruz, Berkeley and Riverside, the unified contingent demonstrated deep dissatisfaction with the UC system’s ongoing failures to uphold the rights of workers and students to adequate housing, wage, and healthcare, all the while investing tuition dollars to profiteers of human rights violations and Israeli occupation.

Students and workers from across the State stand in solidarity against tuition hikes, budget cuts, and the Regents continuation of investing in companies that violate Palestinian human rights at the hands of Israel’s war crimes and racial hierarchy. #UCDivest #NotMyTuitonDollars pic.twitter.com/LvTmKUh6QX— UC Divest (@UCDivest) March 14, 2018

Workers protest against exploitation and layoffs  Representing workers, AFSCME Local 3229 called for the transparency of UC Regents’ business dealings and fair wages for all UC employees. Fueling the demonstration was also UCLA’s announcement in January that it would lay off about 25 percent of UCLA Extension staff. Along with AFSCME was the California Nurses Association/National Nurses Organizing Committee/AFL-CIO representing registered nurses working at all UC medical centers. Representatives of this union joined the protest to demand shorter working hours and more staff in their contract negotiation with the public institution.

Intersecting the UC workers’ struggle were student activists calling for the UC Regents to recognize UC’s complicity in the violations of Palestinian human rights through contracts with corporations profiting off of Israeli occupation. Representing this struggle was UC Divest , system-wide coalition of all UC SJP chapters and allies. Student activists from different UC campuses in this coalition started traveling as early as 4 AM to join the picket line at UCLA.

The de facto and de jure segregation of the Israeli government has established an apartheid state on occupied Palestinian land that echoes the racist and genocidal colonial projects of the Jim Crow era and apartheid South Africa. The international struggle against colonialism and racism and for Palestinian self-determination is part of an unfinished decolonizing project which links together the people’s struggles at Standing Rock, Ferguson, and Pretoria. Divestment thus poses as a means of nonviolent resistance and a just call for individuals, companies, and nations to uphold international humans rights.

In September of 2014, UC Regents adopted the United Nations’ Principles for Responsible Investment, which mandates the signatory to uphold internationally proclaimed human rights and thus requires divestment from businesses that are complicit in human rights abuses. Since the adoption of this resolution which was supported by the UC Student-Workers Union and UC Student Associations, the UC system’s investments in companies such as Lockheed Martin, Raytheon, Northrop Grumman, Boeing, Caterpillar, Ford, General Electric, 3M, etc., are still widely documented. UC Divest was therefore launched as a long-term project to hold the UC system accountable in divesting from military contractors and corporations which materially aid the occupation of Palestine by an apartheid state.

Regents represent the interests of corporations

The UC Regents are the governing board of the UC system, comprised mostly of individuals appointed by the Governor of California and ex officio members. Regents appointed by Governor Jerry Brown, who make up the majority of the Board, are business owners, politicians, and owners of established law firms, most of whom are known to have generously donated to Brown’s election campaign.

While incessantly calling for an  increase in state funding for the UC to postpone a tuition hike, Regents are known to have continuously ignored valid criticisms for their frivolous spending. For example, last year, amidst a workers’ strike against unfair wages and violations of state labor laws, the Board approved UCLA’s project totalling $9.1 million to build a luxurious study hall along with new facilities as the campus bids to become the host of the 2024 Summer Olympic Games. Both actions were vehemently opposed by students and workers across the campus. Appointed regents also have been accused of  fraudulent budgeting and business practices.

Janet Napolitano, the UC President who previously served as the Secretary of Homeland Security under deporter-in-chief Barack Obama, was put under the investigation by the state auditor in April, 2017. The auditor’s claimsthat Napolitano’s office had built up a de facto slush fund along with an accumulation of $175 million in undisclosed budget reserves were later dismissed by the UC system as “mischaracterizations.” The claims against Napolitano were dismissed and the consequent call to rollback the 2.5 percent tuition hike for 2017 was ignored.

The Board’s contrived effort to censor the voices of workers and students during the public comment session of the regents’ meeting further reflects its profit motive and feigned democracy. Students and workers were pitched against each other for a chance to raise their concerns during the meeting. To briefly speak up at the public comment session, students and union workers had to sign up at 7 AM on a weekday.

Initially capping the list at around 70 speakers, the Board’s chair George Kieffer abruptly ended the public comment section, only allowing around 50 people to speak. Excluded by that cut were two Palestinian student activists from UC Santa Cruz representing UC Divest. The representation of UC Divest was thus completely barred from the public comment session. Despite the responsibility to reflect the demands of workers and students, UC Regents ultimately voted 12-3 in favor of the 3.5 percent tuition hike for out of state and international students. This amounts to an increase of $978 in tuition.

Leading the chant “UC Regents, can’t you see? We don’t want your tuition fees,” students disrupted the meeting after the committee voted for the hike. Additionally, regents approved an increase in Professional Degree Supplemental Tuition for 23 graduate programs on campus. While the UC tokenizes students and faculty “diversity” and uses the rich history of student activism on its campuses as selling points, the system ultimately continues to ignore demands to divest students’ tuition dollars from apartheid profiteers and invest in healthcare, fair wages, and fair labor conditions.

A united front between struggles

During the protest outside of the meeting, one union worker expressed her happiness to UC Divest because students and workers were able to stand in solidarity to protest the unjust institution. “I am from South Africa,” the union worker said as she held up the SJP coalition’s “UC divest from apartheid” placard.

As students and workers protested against the profit-driven institution under the same chants and banners, we can reflect on Ahed Tamimi’s words. “The Palestinian cause is not just for Palestinians,” the young and courageous freedom fighter said. “The Palestinian cause is a humanitarian cause.” The critical epoch of imperialism, with its intensifying contradictions, deepens the disparities between classes and social groups as much as it connects our seemingly isolated struggles together. Our fight against institutions which benefits off of the exploitation of students and workers cannot be detached from the fight to dismantle the U.S. war machine, the military industrial complex, and the oppression of all colonized people.