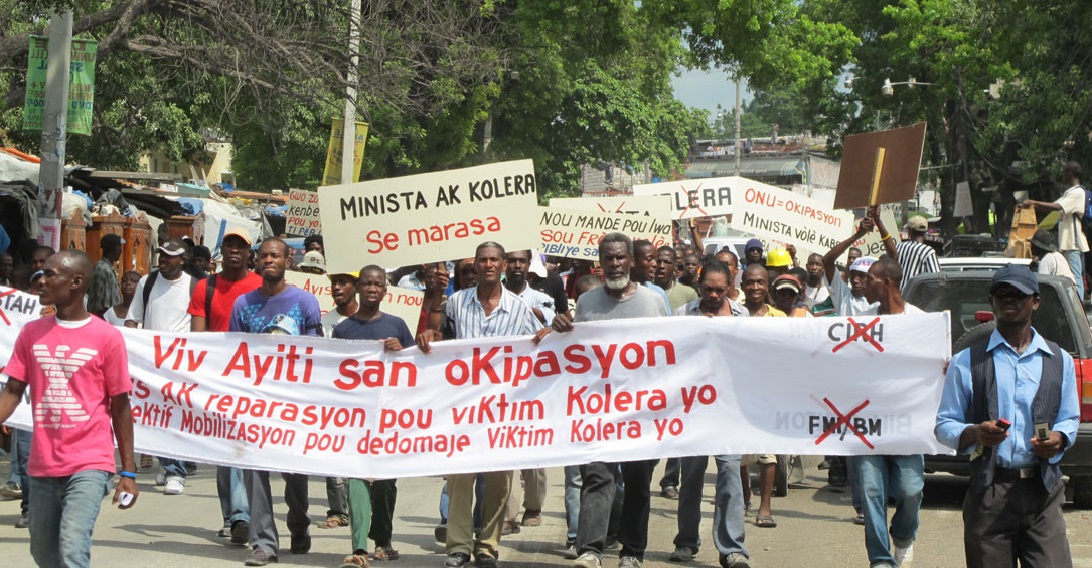 On June 20, the United Nations Secretary General was served with a notice requiring him to appear in Court and respond to legal actions taken on behalf of over 8500 Haitians who have died from cholera. In addition, over 700,000 have been impacted by the disease that was brought to Haiti by the UN forces occupying the country on an allegedly humanitarian basis.

While reports point to clear evidence of the UN “peacekeeper” origin of the epidemic, the UN has declared that it cannot be sued and it has refused to agree to any other remedies. This refusal is a violation of the UN’s own operating agreements. Section 29 of the 1946 UN Convention on Immunities requires a process for settling disputes as does the Status of Forces Agreement (SOFA) that the UN signed with Haiti in July 9, 2004. In that document sections 54 and 55 require that the UN set up a process to settle claims for personal injury, illness or death attributable to its forces known as MINUSTAH. The UN has never set up a claims commission. In fact, such a process is required in all of the 32 SOFA agreements involving peacekeepers and the UN has never established the process required.

In the meantime, the desperately poor people of Haiti suffer and die.

While lawyers for the families filed petitions for relief and other legal actions beginning November 3, 2011, the UN refused to even provide a letter in response until February 21, 2013. And then it was only to say, “You can’t sue.”

U.S. government: Haitian victims have no right to a remedy

On March 7, the United States filed a “Statement of Interest” declaring that the suffering families had no right to serve papers on the UN, no right to sue and no right to a remedy.

On January 12, 2010 an earthquake hit Haiti with devastating force. Between 100,000 and 300,000 were killed. Hundreds of thousands of homes were demolished. Food and water became even scarcer.

Amid this dire situation, 12,000 United States seized the Presidential Palace, the main banks, the port and airport, refused to let aid in for week afterwards as 13,000 troops landed. The people needed food, clothing, housing and equipment to get to those buried in rubble. But instead they got troops, religious lectures and racism. On January 13, Pat Robertson told the world that the reason for the quake due to a pact that Haiti had made with the devil. He then went to talk about Voodoo in a way that revealed that he knew nothing about Haitian history, culture or religions.

Promised US aid was exaggerated. As Liberation News pointed out at the time, “For every dollar spent in the “aid” effort, 33 cents pay for the U.S. military force that has taken control of the country. In contrast, the U.S. government is spending only 9 cents of every dollar on food and another 9 cents to transport the food.”

The US government’s humanitarian impulse was reflected at the time in the fact that from January 2009 to January 2010 US judges issued 30,000 deportation orders for undocumented Haitians who were even then escaping the ravages of four hurricanes in 2008.

While working class organizations and poor communities organized and mobilized themselves to address the most crying needs they had to at the same time get around blockades of armed troops who did not understand their language.

Lies using humanitarian aid and human rights are often invoked to gloss over reality and mobilize the US population for war and occupation. The UN has been a useful tool for this not just in Haiti but also in Lebanon, Yugoslavia and wherever their troops land.

On December 11, 2012 the United Nations announced “The Secretary-General’s Initiative for the Elimination of Cholera in Haiti” which involved $2.27 billion being spent on water and sanitation in Haiti and the Dominican Republic. Yet a year and a half later the funds have not been raised and the UN hasn’t even raised the $5 million needed to vaccinate 600,000 people who have a high risk of getting cholera. Communities don’t have water purification tablets and clinics are running short of medicine. Public relation stunts announcing big (and empty) projects are designed in part to divert attention away from the fact that the UN refuses to take responsibility for the epidemic it caused.

Anyone with a drop of real humanity wants to build real solidarity with the Haitian people and real support for self-determination. For centuries the Haitian people have been struggling against exploitation and oppression that has made it impossible for the country to develop the infrastructure to better handle public health crises. If only a fraction of the wealth that has been taken from Haiti by way of cheap labor and resources were returned to it, Haiti would be able to solve its own problems quite easily.

US position on war crimes

On May 6, 2002 the Bush administration sent the UN a note saying that Clinton’s signature on the “Rome Statute” which set up the International Criminal Court would not be honored and that the US would not recognize the authority of that Court.  While nearly the whole world signed onto it, the US government was going in the other direction because it didn’t want troops to be held accountable for war crimes.

On August 2, 2002 Bush signed the American Servicemembers’ Protection Act. Among other things this act authorized the president to use military force to free any US soldier held by the Court. Can you imagine what the US would do if any oppressed country were to assert such a position?

On June 30, 2003 President Bush signed an Executive Order that cut off military aid to 35 countries which had refused to sign agreements which would exempt US soldiers from being prosecuted. This was not applied to the major imperialist NATO powers but rather to the most oppressed countries where US troops have a history of committing war crimes.

US bullying actions forced the UN to pass resolutions exempting the United States troops in “peacekeeping” operations as in Haiti- from any possible Criminal Court prosecution for war crimes.

Neither Carter, Bush nor Obama have submitted the “Rome Statute” to the US Senate for approval, indicating that the essential position is the same for both Democrats and Republicans administrations.

At the same time the US has tried to use the same Court that it refuses to submit to as a weapon against others- like Sudan.

War crimes have been committed by the US government since the beginning. For example war crimes were committed against Native people in the US, against Filipinos during the beginning of the 1900s, against Japanese in WWII, against women in Europe after WWII, against women in Okinawa during decades of occupation, against Koreans at No Gun Ri and countless other Korean sites, against the Vietnamese people (320 incidents were confirmed/ substantiated by the US Army) and in Iraq and Afghanistan and elsewhere around the globe.

In Haiti the Arawaks were exterminated. When the Haitian people overthrew colonial rule, the United States imposed a six year embargo to try to starve the new Black Republic into submission. Brutal US military occupations such as the one in 1915 were geared to both terror and looting. The US Marines seized the Haitian Treasury and took all of the gold, transferring it to the National City Bank in New York. When the people resisted the marines but whole villages into concentration camps and murdered thousands. In just one day in 1929, US troops killed 264 peasants marching for justice. US supported dictators were installed and given military aid for torture and repression. Later in 1990s there were more US supported coups, more US supported terror squads, more murders and more occupation.

That context helps to expose what is behind US and UN declarations that the cholera victims cannot sue and that victims of US war crimes cannot take the perpetrators to an International Court.

It is important to pursue cases for justice for the victims through the Courts and every forum where the system can be exposed and where some modicum of justice can be obtained. No field of battle should be surrendered to the other side. But it is also important to see the significance of the UN and US actions in refusing to provide any remedies. Real and complete justice can only be won by an independent struggle against the system.