This article was originally published in March 2018. The Party for Socialism and Liberation expresses our deepest condolences to the loved ones of the victims in Uvalde, Texas and remains committed to the fight for a society free from these constant massacres and all other forms of violence

After the horrific mass shooting in Parkland, Fla., the country witnessed an outpouring of sympathy and outrage. Parents immediately thought of the safety of their own children. Students everywhere are discussing it with their teachers. Many are now mobilizing and walking out.

The student-led protests against government inaction on the epidemic of gun violence have forced the issue back onto the national stage. Prayers and sympathy messages from politicians are no longer enough. They want to know how politicians are going to make the violence stop.

Some socialists suggest this student movement, just for raising the question of gun regulations, empowers the state or threatens the right to self-defense. Others have criticized the students for failing to get at the “root” of the problem of violence in the United States. Any progressive movement — or movement that has progressive sentiments — that arises spontaneously under capitalism will have contradictions and problems. Any movement that is fighting for reforms, by definition, does not get to the “root” of exploitation and oppression. But that does not invalidate the struggle for reforms.  Further, to quote Malcolm X, “Don’t be in a hurry to condemn because he doesn’t do what you do or think as you think or as fast. There was a time when you didn’t know what you know today.” Socialists should engage with solidarity and sensitivity towards the young people who want answers to the question of gun violence.

The following are the words of Emma Gonzalez, a student and survivor of the massacre at Marjory Stoneman Douglas High School who spoke on Feb. 17 at a gun control rally:

“The people in the government who were voted into power are lying to us. And us kids seem to be the only ones who notice. … Companies trying to make caricatures of the teenagers these days, saying that all we are self-involved and trend-obsessed and they hush us into submission when our message doesn’t reach the ears of the nation, we are prepared to call BS. Politicians who sit in their gilded House and Senate seats funded by the NRA telling us nothing could have been done to prevent this, we call BS. They say tougher guns laws do not decrease gun violence. We call BS. They say a good guy with a gun stops a bad guy with a gun. We call BS. They say guns are just tools like knives and are as dangerous as cars. We call BS. They say no laws could have prevented the hundreds of senseless tragedies that have occurred. We call BS. That us kids don’t know what we’re talking about, that we’re too young to understand how the government works. We call BS.”

Currently, over 60 percent of the population supports stricter gun laws.

After the Sandy Hook massacre in 2012 in which 26 people were massacred, including 20 six- and seven-year-old children, much of the population rallied behind stricter gun laws. Washington did nothing.

Mass shootings are on the rise — dramatically so. Almost 600 people were killed in mass shootings of this type in 2017, the highest number in modern history.

Black men are four times more likely to be shot and killed than white men.

Every 16 hours a woman is killed with a gun by a domestic partner in the United States.

The police killed over 1,000 people in 2017. More people were killed by racist police forces last year than in mass shootings.

Clearly, the United States is an extremely violent country — much more so than other “developed” countries. Every single statistic bears that out. This is a social problem of considerable magnitude, and the capitalist ruling class has provided no substantive answers to the millions demanding something be done. It is insufficient for socialists, just because we oppose the capitalist state having a monopoly of force, to say “nothing can be done.”

The 2nd Amendment was added to the Bill of Rights as a license for racist vigilante militias — with the overt and covert backing of the United States government — to carry out a reign of terror against Native populations.

Slave patrols carried out unspeakable atrocities against the Black population as a matter of routine in the enforcement of slavery. Of course enslaved people would be severely punished if found in the possession of firearms; after slavery, the Black Codes across the South forbade Black people from possessing firearms. When the Black Panther Party powerfully exercised their right to bear arms, the California state legislature rapidly changed the law to criminalize this, with the NRA’s support. Philando Castile, a school employee exercising his right to carry a weapon under Minnesota law, was killed on the spot when he announced that he had a gun — (and again the NRA did nothing for him). Tamir Rice, after playing with a toy gun, was instantly murdered by a Cleveland officer; Ohio is an open carry state.

Native and Black resistance, even when operating within the law, was and has always been met with repression and brutality.

The fact that police forces to this day murder Native and Black people at a much higher rate than white people is not a coincidence. It is not possible to separate institutional and violent racism from the social and political character of the U.S. state.

Imperialism is violent. The U.S. wars that are fought in the interest of profit and domination against poorer countries are devastatingly violent. Literally millions have died.

Oppression is violent by its very nature. Racism, sexism and bigotry are all inherently violent and are all a part and parcel of the political, social and economic fabric of this country.

Everywhere you look in the culture of the United States you see violence.

And it sells too. While other manufacturing industries have declined in the United States, weapons and gun production have skyrocketed. The U.S. produces, exports and sells more weapons than the rest of the world — subsidized by the largest military budget in world history.

The weapons industry thrives on war and is always eager to peddle their goods in new conflict zones, but they have branched out. What started as a slow trend of selling excess military-grade weaponry to local police departments and individuals has now flourished into a vast civilian market. The gun manufacturers and advertisers cultivated the culture around their products, and use fear-mongering about terrorism and government confiscation to boost their sales. In a very profound way, it is capitalism — the for-profit economic system we live under — manifested in the weapons manufacturers, the gun lobby and the NRA that has thwarted any rational public discussion about guns in our society.

What can be done?

So what do we do? While the above historical context of U.S. violence is necessary, it is not sufficient to say that capitalism is the root cause of gun violence or that systematic racism is at the heart of the disproportionate impact of gun violence in Black and Latino neighborhoods. People want answers and they want change. There is a national consensus about the need to reduce violence, to have a meaningful  dialogue to combat the problem of violence in the United States effectively. Socialists should participate in that conversation with concrete proposals and to make that dialogue wide-ranging and radical.

The existing terms of the gun violence debate — “gun control” versus “gun rights” — if we are to be honest, are extremely superficial and inadequate to the complexity of the problem. To put it succinctly, under the capitalist system neither gun control nor gun access has guaranteed people’s safety or protected their rights.

A broader program is necessary to which socialists have much to offer. For instance:

We support the students who are marching to reduce gun violence, end mass shootings and hold the gun manufacturers and their lobbies accountable. At the same time we support the right of oppressed and working-class people to defend themselves. These are not opposed principles; they are both progressive instincts that share a common goal: peace and justice, a life with dignity.

We need to be clear: The ruling elite of the United States — which includes people who make enormous profits off of the sale of guns and weapons of war—will not stop the violence. Violence and the profit from it are baked into the U.S. capitalist system.

There is unanimity in the centers of power to stay committed to the weapons manufacturers as an important way to sustain profits and to prop up the U.S. empire. They see no problem with arms in the hands of reactionary, racist elements in society, including the white supremacists, vigilante and fascist groups. They hope these social forces will continue to side with them if the discontent against the inequality of wealth and oppression in this country grows to the point of rebellion, revolt and militant multinational unity in the big cities.

The U.S. state has decided to go all in on rounding up immigrants with the ICE gestapo, the militarization of the police forces, domestic spying, the demonization of Black and Native peoples who dare to resist and a clamp down on dissent in general.

The government as a whole, including both major parties, is not overly concerned with the violence in poor and working-class communities — it fuels mass incarceration policies and is a considerable weight on the daily lives of the most oppressed that obstructs organizing against the real enemy.

The Democratic Party has moved in swiftly to take control of the student movement with a whole assortment of marketing firms, lawyers, and staffers, promoting the students only to further their own interests in the 2018 elections. This is complete opportunism and must be exposed.

More generally, the U.S. legal and political system is committed to protecting the perpetrators of violence all the time. When one killer cop after another gets away with murder, when war criminals like George Bush walk free, when the architects of dirty wars, coups and assassinations are not held accountable, and are in fact treated like national heroes, we see that the ruling class, as a matter of policy, endorses murder.

The only way to break the patterns and culture of violence is for poor and working people to take the economic and political powers of the country into our own hands. When we do that, we will have at our disposal all the resources we would need to unite the vast majority, fix mass shootings and end the daily violence created by the racist and sexist U.S. capitalist order. 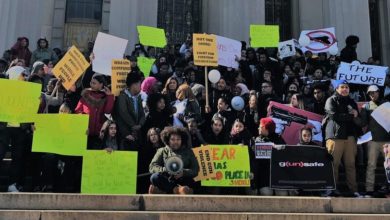