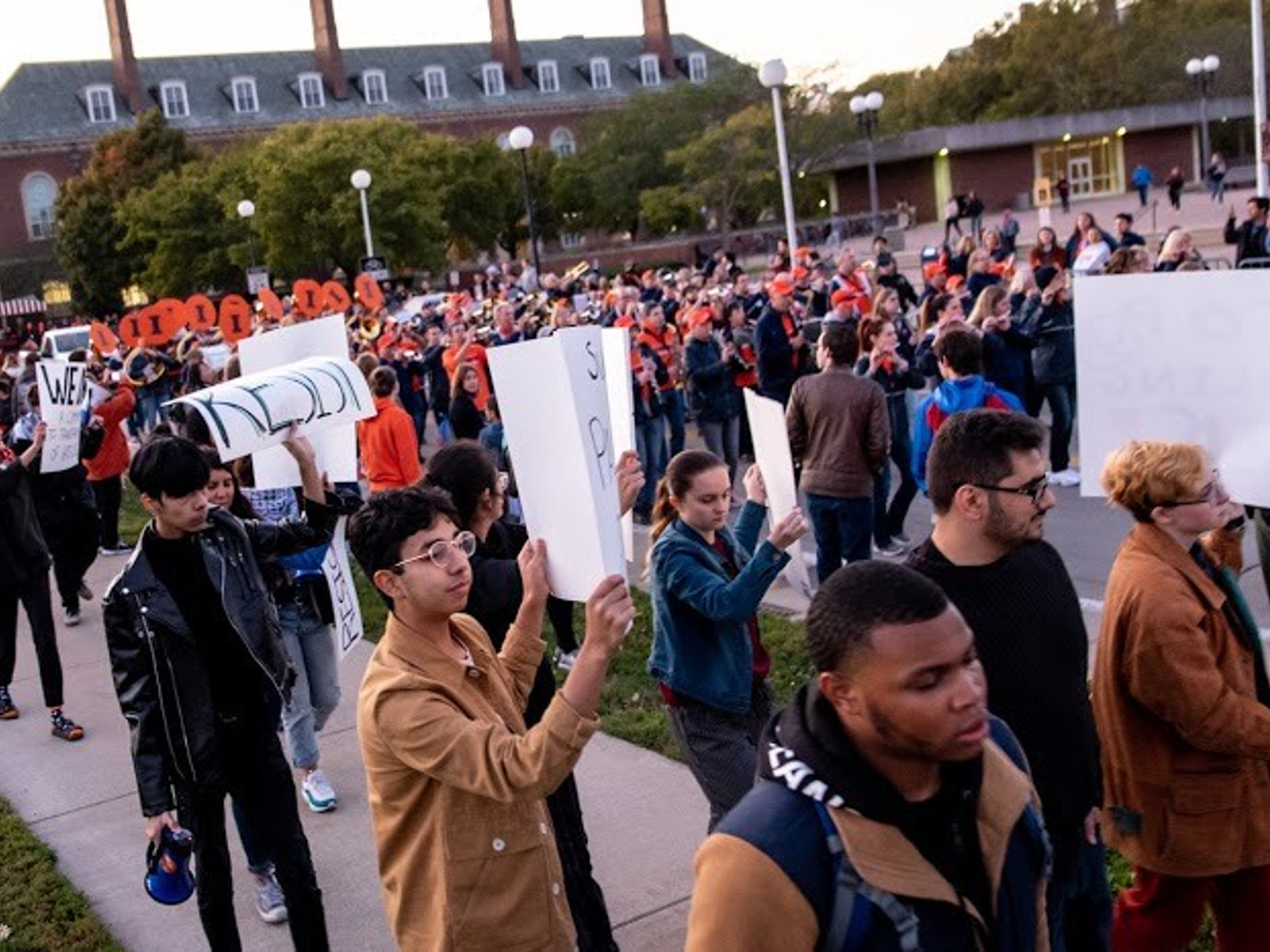 October 18 protest on the University of Illinois campus in Champaign-Urbana, during the school's homecoming parade, against the administration's attacks on solidarity with Palestinians. Photo by Liberation News.

On October 9, Chancellor Robert Jones of the University of Illinois at Urbana-Champaign sent a mass email to all university students and workers, which stated pro-Palestinian activism is anti-Semitic. This statement has sparked a movement to defend Palestinian rights and confront the real sources of bigotry on campus.

With the subject line “Addressing Anti-Semitism,” the mass email began by stating that multiple incidents of intolerance had occurred on campus. The first incident reported in the mass email was that “a swastika [was] found in the Foreign Languages Building. An investigation has been launched and is on-going.” No further information was provided about the anti-Semitic aggression, nor did the administration provide measures to address it.

Instead, the mass email continued with six lengthy paragraphs in which the chancellor condemned “a recent presentation with anti-Semitic content at a staff development program by a Housing student-worker.” The presentation was given by a Palestinian student-worker and Multicultural Advocate. The content of the presentation was the recent history of Palestine, including the ongoing Israeli occupation and apartheid, as well as the Great Return March. Another student, who has since been found using historically derogatory terms for Black people, incorrectly claimed that this presentation, which has been used for years, was anti-Semitic.

One of the slides in the presentation explicitly pointed out the fundamental differences between anti-Zionism—criticism of Israel’s policies as a settler colonial and apartheid state—and anti-Semitism—a racist ideology that is based on the scapegoating, targeting and persecution of Jews. The student-workers giving the presentation, over the course of the 16 weeks of the last semester gave six talks about anti-Semitism as part of their commitment to activism and Palestinian liberation.

In the mass email, the chancellor continues with a bullet-point list with intended actions to monitor the content of future presentations, sending a clear message to Palestinian students and activists on campus that their voices were being silenced. This is not the first time that the chancellor conflated anti-Zionism with anti-Semitism in a mass email. Only a few months ago during the Students for Justice in Palestine’s Divestment campaign Jones also conflated anti-Zionism and anti-Semitism.  After the initial incident, professor Bruce Rosenstock of Jewish Studies, who teaches a class on anti-semitism, gave a private presentation to the chancellor about the distinction between anti-Zionism and anti-Semitism. It appears that either the chancellor did not learn one thing from the presentation, or he deliberately ignored the Jewish scholar and went on with the imperialist agenda.

Students for Justice in Palestine at UIUC stated in a press release that “as a result of equating Nazi imagery to an anti-Zionist presentation [in Chancellor Jones’ mass email], Palestinian students on this campus and SJP UIUC have been vilified as terrorists…This rhetoric poses a serious danger to Palestinian students and to all that support the Palestinian cause.” SJP continues in the release to call out the university administration for its lack of transparency on hate crimes: “We urge the University to condemn all acts of anti-Semitism, including the Holocaust deniers and conspiracy theorists spreading violent and deceptive rhetoric on the Main Quad that threaten the safety of all students on campus. We urge the University to effectively address the longstanding anti-Semitism on this campus.”

The mass email generated an immediate response from SJP, which released a list of ten demands signed by 16 different organizations, among them the Party for Socialism and Liberation — Champaign-Urbana. The demands include “the release of an additional mass email that corrects previous fallacies and vocalizes support for Palestinian faculty and students on campus.” The tenth demand is that the chancellor resign if he again fails to listen to the student body and faculty, which he has done multiple times already.

On October 18, SJP and allies from across campus, including many members of the Party for Socialism and Liberation, protested at the UIUC 2019 Homecoming Parade in response to the racist actions of the university administration. The organized protest was a success, with dozens of protesters informing hundreds of attendees of the University’s racism. For many people this was likely the first they had heard about the silencing of Palestinian struggles on campus. In conjunction with this action, SJP hosted a teach-in on the Main Quad on campus to provide education for individuals on the history of the Palestinian liberation struggle.

Resolution from the Illinois Student Government

On October 23, the Illinois Student Government held their General Assembly Meeting at the Activities & Recreation Center, to vote on a resolution that addressed recent racist, bigoted and anti-semitic acts that had occurred on campus. It also supported all demands put forth by the local SJP branch, with the exception of calling for the chancellor’s resignation should the demands not be met. The resolution demanded the university should “apologize to the student(s) in question and to the general university public for wrongfully categorizing Anti-Zionism as Anti-Semitism, slandering many students’ image and their cause.”

During the public comments section of the meeting, an SJP representative read out their press release with much support from the audience, which responded with chants of “Free, Free Palestine.”

Multiple students shared their stories of being harassed engaging in pro-Palestine activism, with death and rape threats being a common occurrence for speaking out.

Prof. Rosenstock commented that the reason the chancellor sent out the mass email was because the Zionists were heard by the administration. He said that they were not silenced, and what they wanted to do was silence everyone else. He mentioned he received a hate email charging him as being a “kapo” – a Jewish Nazi collaborator during the Holocaust that helped push others into the gas chambers for their own survival.

“No other voice is being silenced, other than those who criticize Israel”

Michael Johnson, a sophomore at UIUC who participated in the International Solidarity Movement and Return Solidarity in Palestine, gave comment at the ISG meeting. He said the ISM non-violently opposes the Israeli occupation of Palestine and Return Solidarity is a Jewish Israeli activist group that coordinates non-violent protests in solidarity with the Gazan Great March of Return. Johnson spoke of how he witnessed apartheid when he visited Palestine.

He supposed that to many it may seem the uproar caused by the chancellor’s mass email is “hysteric,” but added that people must understand that most students at the university “have little to no exposure” to the realities of the Palestine/Israel conflict. “The chancellor insults the Jewish anti-racists by saying that they are anti-Semitic for criticizing Israel, when [Jewish anti-racists] also actively combat anti-Semitism,” Johnson said.

UIUC graduate student Allan Axelrod, also an organizer with the Graduate Employees, began his comment: “Same ‘strat’, different day,” referring to how the exact same charade occurred at other universities across the U.S.,  anti-Zionism has been conflated with anti-Semitism. “My grandparents died because they were considered as “less,” but together we are more!” He also said Zionist protesters yelled homophobic slurs at him on his way into the ISG.

Palestine must be free

The Party for Socialism and Liberation stands in solidarity with the authors of the resolution for both standing up against anti-Semitism and for the brave pro-Palestinian activists. Given that the threat of imperialist reactionaries has materialized physically and culturally, the struggle for decolonial liberation across the world is more important than ever. To quote from the protests, “Free, Free Palestine!”