Washington is escalating its military threats against Venezuela, moving from words to action.

The Cuban government announced on Feb. 13 that U.S. flights originating from U.S. bases where Special Forces and Marine Corps operate made their way to Puerto Rico, the Dominican Republic, and other islands without the knowledge of their respective governments. The locations are all strategic positions for military operations against Venezuela, and the Special Forces and Marine Corps engage in unconventional warfare, amphibious operations, and other forms of military action routinely in order to destabilize or overthrow foreign governments. The official statement further called for the international community to mobilize to prevent a war against the South American country.

Venezuelan Minister of Foreign Affairs Jorge Arreaza announced the following day that a group of countries is coming together in defense of Venezuela based on the principles of the UN Charter – including respect for the principle of equal rights and self-determination, the sovereignty of UN member nations, refraining from the threat of use of force, respect for the territorial integrity of other states, and non-intervention in internal, domestic matters of another state.

“We must ask the media not to be part of bloodshed in Venezuela,” Arreaza stated in his announcement, highlighting the complicit role that corporate media in the U.S. and abroad have played by misrepresenting the situation in Venezuela and creating a political climate conducive to imperialist aggression. Arreaza was accompanied by representatives from Russia, China, Iran, Cuba, Nicaragua, Bolivia, North Korea, and Syria along with the Palestinian representative and diplomats from Caribbean countries. The Wall Street Journal reported that, according to the Palestinian representative, 50 countries participated in the meeting to form the new coalition.

U.S. military movements in the Caribbean are only the latest move to overthrow the democratically elected government of Nicolás Maduro. Venezuela has been facing economic sanctions imposed by Washington designed to break the back of Venezuelans supporting their government. Juan Guaidó, who illegitimately proclaimed himself “president” of Venezuela after receiving assurances of support from Vice President Mike Pence, offered amnesty to military officers who defected to the opposition. The joint strategy coordinated with Washington was an attempt to split the Venezuelan armed forces, implying that in the event of a successful coup those who stood by Venezuela’s legitimate government would be tried as criminals.

These efforts so far have been useless. The Venezuelan people have refused to cave and the military has stayed united behind Venezuela’s government, with military exercises being carried out to prepare for the defense of Venezuela’s territory.

Their courageous resistance makes the possibility of U.S. military aggression ever more real.

As Venezuela stands tall against foreign aggression, a growing number of countries are coming to its side. The actions of people in the United States and worldwide could now be the decisive factor. On Saturday, March 16, a National March will take place at the White House in solidarity with Venezuela. The actions have so far been endorsed by 90 organizations, activists, and prominent individuals, and continues to grow. Please help spread the word and join us on this important action to say: “Hands off Venezuela! No coup, no sanctions, no new U.S. war!” For details on the national march, visit: http://www.answercoalition.org 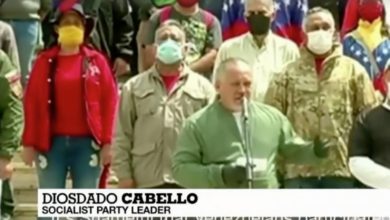 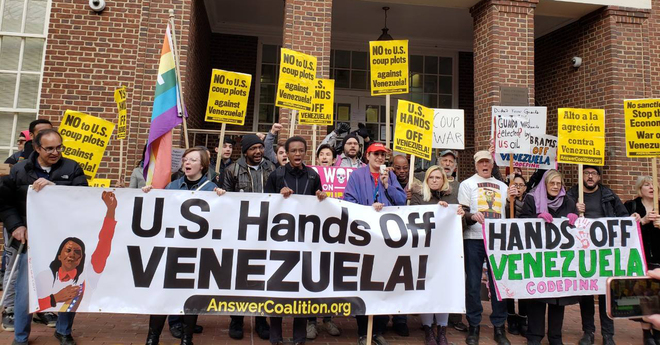