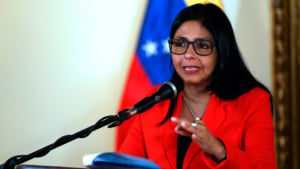 In a decisive move on Wednesday, Venezuela declared it is withdrawing from the Organization of American States. This will take place after a two-year process.

Foreign Minister Delcy Rodríguez made the announcement after yet another maneuver against the Venezuelan government by OAS Secretary-General Luis Almagro the same day. In an Extraordinary Session of the OAS Permanent Council, Almagro once again called for a meeting to discuss Venezuela’s internal situation

In May 2016 and again this past March, Almagro attempted to get resolutions passed condemning Venezuela’s government in order to suspend its membership. They failed both times for lack of votes among the member states.

The OAS head has repeatedly insisted that President Nicolás Maduro hold presidential elections this year, despite a decision by Venezuela’s National Electoral Council that the elections are to be held in 2018. The right-wing opposition in Venezuela had attempted a presidential-recall effort last year, but the CNE invalidated it due to thousands of fraudulent signatures.

With Almagro’s new offensive on Wednesday, President Maduro declared the severing of ties with the OAS. “As Head of State in use of my Exclusive Powers in accordance with the Constitution I have ordered the immediate withdrawal of the OAS.  … Enough of interventionist abuses and violation of legality, Venezuela is the cradle of the Liberators and it will be respected.”

Almagro insists the OAS will continue to meet about Venezuela, although no date is set.

He is widely understood as acting for the United States government, which has pressured its right-wing allies, the heads of state of Mexico, Panama, Chile, Argentina, Brazil, Uruguay and others to interfere in Venezuela’s internal affairs.

Although the OAS declares its mission is to promote “democracy, human rights and the rule of law,” it has been extremely selective in the application of those principles.

It said nothing when the U.S. government financed a bloody contra war against the Nicaraguan revolution, it did nothing to stop the U.S. proxy war at the Bay of Pigs, and didn’t act against the U.S. for its 1973 coup in Chile. April 24 marked the bloody 1965 U.S. invasion of Dominican Republic. More recently, the OAS did not expel Honduras nor condemn the U.S.-backed coup that overthrew President Mel Zelaya in 2009. And there is no condemnation of the violent denial of human rights of over 100,000 people killed in Mexico. The U.S. continued blockade of Cuba is a massive 55-year crime against the Cuban people. These are only a few of the crises that the OAS did nothing to defend the peoples of the hemisphere.

This is because the OAS is a creation of U.S. imperialism since its founding in 1948. Its Washington headquarters should be a clue.

It should be remembered that only one state was ever punished by the OAS. That was Cuba, for succeeding in the first true example of human rights, people’s democracy and freedom. At the order of the United States, Cuba was expelled in 1962, for being “Marxist-Leninist.”

After its years of resistance and being a true beacon for the Americas, the resolution expelling Cuba was finally canceled in 2009. But although Cuba is listed as the 35th member state of the OAS, it has proudly refused to re-join. Cuba’s Foreign Minister Bruno Rodríguez once said, “The OAS has a negative historical baggage as an instrument of domination of the United States that can’t be changed by any reform.”

But there is an institution that counters the U.S. dominance in the region. CELAC, the Community of Latin American and Caribbean States, includes all states except the United States and Canada. And it will meet on May 2 in El Salvador, to discuss ways to truly ensure the principles of sovereignty and independence.

Washington has waged a multi-pronged destabilization campaign against the revolutionary process known as the Bolivarian Revolution of Venezuela. Part of that campaign has been the funding of violent right-wing groups that are engaging in more and more deadly acts against the symbols of progress in Venezuela: hospitals, government housing institutes, schools.

In recent days, the Bolivarian masses have been in the streets defending their revolutionary struggle against the violence and threats. Venezuela’s declaration proclaiming its right to pursue its own course free of U.S. imperial dictates is an important step forward.