On Feb. 27, people from around the San Francisco Bay Area gathered for a rally and caravan in Berkeley and Oakland to demand cancellation of rents and mortgages, an end to evictions, and housing for the homeless. Over 20 organizations were represented, including the California Nurses Association/National Nurses United, Do No Harm Coalition, AFSCME 3299, United Native Americans, the North Bay Organizing Project, and the Bay Area branch of the Party for Socialism and Liberation.

Organizers of the event emphasized the connection between housing and health care. Fabian Fernandez, a volunteer at Clínica Martín-Baró and a representative of the Do No Harm Coalition, spoke about how patients experiencing homelessness or housing insecurity undermine the clinic’s ability to treat them. “We see the issue of housing as essential to the struggle for health as a human right.”

Despite supposed eviction moratoriums at federal, state and local levels, Bay Area landlords are still issuing hundreds of eviction notices. The loopholes in the eviction protections must be closed, and rents and mortgages canceled, or the Bay Area will be hit with a tidal wave of evictions when these patch-work protections expire.

There are over 37,000 vacant apartments and homes in Alameda County while more than 8,000 people live on the streets or in shelters. The story is similar in every city around the Bay Area and throughout the country — far more empty homes than homeless people. Cities around the Bay Area have ample resources to guarantee housing as a basic human right. The only missing piece is the political will to do so. Quanah Brightman of the United Native Americans urged those gathered to “band together, form our coalitions, form that mighty fist, and take back our rights!”

The San Francisco Bay Area Cancel the Rents campaign organizes regular actions to build the movement for rent cancellation in the Bay Area and country-wide. To get involved, sign up at canceltherents.org/bayarea 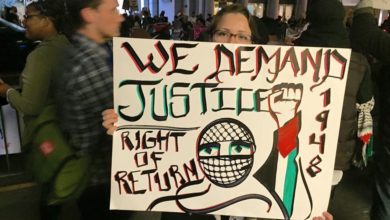