On Sept. 1, community members gathered in front of the Immigration and Customs Enforcement office in Albuquerque, New Mexico, to honor the life of Kesley Vial, a young Brazilian man who died in ICE custody. Vial, 23, died on August 24 due to the horrific conditions, neglect and racist abuse at the Torrance County Detention Center, which is southwest of Albuquerque in Estancia, New Mexico.

Vial was being held indefinitely after seeking asylum from Brazil, where there are many economic and political crises under the reactionary Bolsonaro administration.

Those close to Vial spoke at the vigil, which was organized by New Mexico Immigrant Law Center, Justice for Our Neighbors El Paso, and Vida. Wesley, who knew Vial while at the Torrance County Detention Center, related in a tearful statement:

“Kesley was one of the 200 prisoners [at Torrance]. His time at the prison was really rough. And all that he asked was that he return to his country of Brazil. But they refused. After failing the interview with ICE, Vial came back crying and wishing he could go back to Brazil. He was close to going back to Brazil, and he was boarding the airplane, and the ICE agents took him back [to the facility]. So then he started getting anxious and ended up taking his life.”

Candles were lit in honor of Vial and those whose lives have been stolen while in detention centers. Since 2004, over 220 people have died in ICE custody. Karla, one of the organizers of the vigil, stated in a candle-lighting litany, “We will not let their deaths be in vain. We light these candles as a symbol of our commitment to continue to seek justice for immigrants in pain all over our country.”

In an interview with Liberation News, Karla emphasized what the demand for justice means in immigrant communities. “Justice would be some kind of financial restitution. His family can’t even get his body back to Brazil. Restitution is merciful, honest and humble. We need concrete change in our government and society.”

Throughout the vigil, songs were performed that echoed the demand for justice and action.

“We are a gentle, angry people, and we are singing, singing for our lives”

The vigil ended with a chant remembering those who have died in ICE custody. The chant began with Heriberto Verdecia-Carrillo, who died in 2003, and ended with Kesley Vial.

ICE, family separation, deportation and all forms of violent border supremacy are part and parcel of the capitalist system. U.S. imperialism and U.S.-backed coups continue to destabilize the Global South, forcing people to flee atrocious poverty and extreme violence only to be met with imprisonment by ICE agents in the United States.

Working people in the “belly of the beast” must continue to build a movement and international solidarity across borders. We must fight to end deportations and shut down immigrant detention centers. Justice for Kesley Vial demands ending the unjust and brutal U.S. anti-immigrant machine. Kesley Vial, presente! 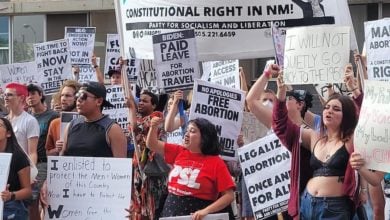