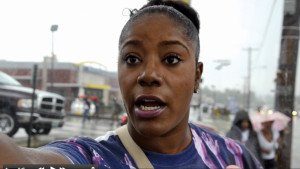 The night of August 17 in Ferguson, city, county and state police launched a brutal attack on a peaceful march of 3,000 people, several hours before a 12 midnight curfew, with hundreds of rubber bullets and dense clouds of tear gas.

And yet, this past weekend the people’s spirit and commitment for justice was not dampened as thousands of people came out for the Aug. 30 National March on Ferguson, called by the Justice for Mike Brown Leadership Council.

The following are voices of several Ferguson area residents — now activists — including two women with whom I and ANSWER activists marched that fateful night of Aug. 17.

On Sunday night, it was about 8:30 pm, people were peacefully protesting. We started at the Quick Trip, went up to Chambers and once we came back down to Ferguson Avenue, that’s when the police came out. They had their rifles, they had their tear gas and they just started tear gassing us. We weren’t doing anything. I got teargassed, I was coughing and ran behind the building. Someone gave me some milk [to rinse the eyes], it was terrible, I had my 13-year-old son out here with me. There was no warning sign. It was horrible.

I saw you because you were at the front of the line. You were making sure that we stayed within the one-half of the block. We had people from our church here, we were together here. I’m going to fight and I’m going to continue to fight for justice. We have our First Amendment right to protest peacefully and it was violated. I want to see justice served, an end to racial profiling, an end to social injustice. It’s about time Blacks were treated equally like all American citizens. 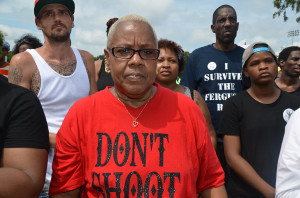 I was hit by two rubber bullets that night, one in the hip and one in the thigh. That night when they told us to disperse, we dispersed. I was on my way trying to walk home. Before we got past Domino’s, the police truck came up so fast, they were shooting and then I couldn’t go on W. Florissant Avenue. And then we ran behind the Enterprise.

They shot me before the Enterprise. I’m still sore and hurting, I’m still here thanks to God. I haven’t been out here since the 17th, I was scared to come. But I said today, “I’m going to be here for Mike Brown.”

That wasn’t kids that started things that day. They [police] started it that day themselves. It’s like I tell people, I’m 54, I’m no kid. I ain’t got time to be lying and playing or trying to take up for nobody. That day it was peaceful. And it started at 9:20 when the police started tripping. I said, wait a minute! They said 12 o’clock for curfew. I was going to be gone by 10, but they didn’t give me a chance. And look, I’ve got two hip replacements, how was I going to run? And I’m trying to run just as fast. My daughter was behind me, screaming and hollering, “Mom!” I’m telling her, “Go, go!” I’m so glad I ran into you today. I remember you, we were out together that day. I thought I was crazy because I didn’t have anybody else to be my witness.

Keith Lloyd is one of Mike Brown’s cousins. He’s part of an encampment across from the police station: 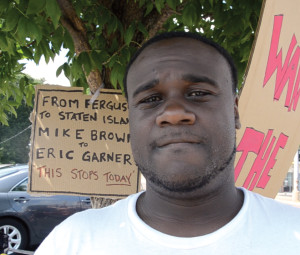 I was out here about 10 minutes after Mike got killed. I was on W. Florissant. A young lady came up and said, “The police is doing it again.” I didn’t understand what she was talking about. When I pulled up to Canfield [residences where Mike Brown lived] I saw a young man stretched out. He was dead on the scene. His body had been out for a little while. I left for a short time. By the time I came back, I found out that was my cousin. I just feel that any person, nobody what race you are, shouldn’t be left out for 4-and-a-half hours, five hours, just dead.

I got arrested the night of the protests, when the Quick Trip burned down [the night after Mike Brown was murdered]. I got arrested for 12 hours for just turning around in my car when they blocked Chambers and W. Florissant. I lost my job and I felt like, at the end of the day, I lost a job, but I also lost a relative. That relative cannot come back. That’s why I still protest to this day.

This camp is here ever since Mike Brown has been deceased. We feel, If Mike could be out there five hours, we can be out here five months, we’ll keep it going, even if it takes five years to get some type of justice. 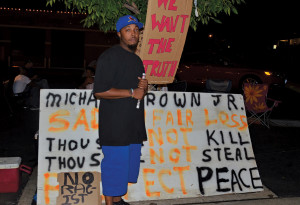 One night I was walking home and the next morning I was supposed to see my kids off to school. That day, I had withdrawn $1,000 from two of my bank accounts, and I had won $600 in a casino, I even had my receipts from the winnings. Since I was walking home at night and had a lot of cash on me, I went to my brother’s house to get my gun for my protection. I carried my concealed-gun permit with me.

As I’m walking home, a police officer stops me and asked if I was armed. I said,”Yes, in my holster on my right side, and I have my gun permit.” He handcuffed me and took me to jail. He took my gun and ammunition clips, even though he knew I had a permit. They took my $1,600 and wouldn’t even let me bond myself out with my own money, or pay off a $1,900 outstanding fine that I had for traffic tickets. See, when you can’t pay a parking ticket, the fines just keep getting bigger and then you really can’t pay.

We’re just fed up with how we are treated. I am here at the camp every night, all night. We’re not leaving here until we see justice done for Mike Brown and everybody else. 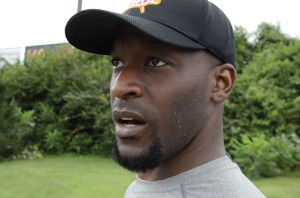 Growing up on the border of Ferguson and Normandy, I’ve also had my run-ins with police officers in both Normandy and Ferguson, so I understand what they’re going through in being profiled, just because of how you look or you may be listening to loud music. There’s nothing wrong with listening to loud music, if it’s songs that you like.

You don’t even have to be doing anything, they’ll find a reason. I was profiled with my big brother. We were dropping some food off to a friend who was in town preaching a revival. We were stopped and we were told the vehicle looked suspicious, and that there was some suspicious activity. It’s like, “come on now, really?”