They just kept coming, and coming … and coming. First many hundreds, than many thousands of people of every race and gender. They came together here in Washington, D.C., on Aug. 12 to protest the second “Unite the Right” rally, held by neo-Nazis and the Ku Klux Klan to commemorate last year’s march that resulted in the murder of antifascist activist Heather Heyer in Charlottesville, Va.

The turnout was overwhelming and inspiring to everyone. Eventually, up to 15,000 people came to say no to racism and denounce the Nazis and Klan.

It was a rout: 15,000 anti-racists confronted 20 Nazis and Klan members. It was clear that the successful organizing efforts of the ANSWER Coalition and other organizations had a serious dampening effect on the right-wing racists. No amount of free coverage in the corporate media, no amount of encouragement from the Trump administration, and no amount of covert and overt financial support from the upper class could mask the contempt that the overwhelming majority of working-class people of all nationalities feel for fascists.

Feeling emboldened by Donald Trump’s statement that Nazi ranks contained “some very fine people,” the white supremacists scheduled a rally at Lafayette Park, right in front of the White House. With press coverage literally outnumbering them, the “alt-right” forces were confident of spreading their fascist demagogy and hate.

Organizers from the ANSWER (Act Now to Stop War and End Racism) Coalition immediately went into action to deny them the ability to use Lafayette Park unopposed to spread their odious message of hate, sending out the word that “the forces opposed to racism, anti-immigrant bigotry, Islamaphobia, anti-LGBTQ hatred and anti-Semitism will not be silenced or intimidated.” Volunteers began to pour in to help with all the tasks required – leaflets, phone calls, banner and sign making, as well as commitments to help with stage setup and security for the day of the protest.

Local ANSWER offices throughout the North East oriented volunteers to be disciplined and prepared for whatever might happen, knowing that in the past police, while protecting the racists, have often attacked protesters with clubs and tear gas.

The Washington Area Metro Transit Authority had actually planned to provide separate trains for the white supremacists to ride to their rally with a strong police escort. This Jim Crow-era plan for “white supremacist-only” transportation was exposed by Amalgamated Transit Union Local 689, which stated: “More than 80% of Local 689’s membership is people of color, the very people that the Ku Klux Klan and other white nationalists groups have killed, harassed and violated. … The union has declared that it will not play a role in their accommodation.”

In addition, restaurants and hotels throughout D.C. announced they would not serve or house the fascists and services such as Uber, Lyft and Airbnb gave their workers the option of refusing service to white supremacists.

However, on the day of the Nazi rally, WMATA found a way to have a fascists-only train car and a large police escort anyway! Police shut down the station in Vienna, Virginia, blocking access for regular users to give the fascists ready access to the train, and while the train was in transit to downtown D.C., riders at other stations were notified to use different cars than those transporting the Nazis.

And on top of it all, the media rode with them the entire way, effectively giving the fascists an extended and personalized press conference

‘Hate and division hold up capitalism’

Speaker after speaker on ANSWER’s stage affirmed the strong, positive message of the anti-racist rally. Rally MCs Eugene Puryear, Yasmina Mrabet, and Kerbie Joseph pointed out the “impressive diversity”of the crowd and explained that “the messages of hate and division are what hold up capitalism.”

Kerbie Joseph, of the Party for Socialism and Liberation, declared that the crowd was “a beautiful sight to see” and that “standing together we have real people power. The Nazis have tried to scare the people, but they are the ones who are scared of us.”

“There’s nothing that scares them more than a multinational alliance dedicated to protecting each other,” she told the crowd.

Jonathan Hutto of Empower DC stated that, “No amount of ignoring was going to stop the Nazis … remember Stalingrad and finish the job!” He  also explained that the struggle was not just against racism and fascism but the “economic violence” of poverty.

Imam Mahdi Bray, the National Director of the American-Muslim Alliance, told the crowd that when he was a boy, his home had been firebombed by racist thugs with shotguns when his father had gone to vote.

Strength and power of diversity

To quote several protesters interviewed by Liberation News, the gathering in the park “looked like America.” Everyone seemed energized by the mix of people – over half people of color standing together with white anti-racists. The strength and power of diversity was the most common comment from the crowd.

Liberation News spoke with Samantha, who came to D.C. from the Louisville, Ky, area, where they are involved in a local anti-racist coalition. Samantha said it was “important for me to be doing something today. … The very idea that some people are willing to show up in person and say ‘I support genocide, slavery, anti-LGBTQ laws … that’s not okay with me.” They said they hoped to inspire others to become politically involved, just like they had been inspired by seeing protesters on the TV as a kid.

Protester Tim Eure told Liberation News he was “glad to see so many communities standing together against racism” and that “white workers were affected by racism, too.”  He said that the rally was a “great start” to continue the struggle, not only against Trump, but the domination of “corporations overseeing the distribution of wealth upwards.”

A young immigrant from Comoros Island (between Africa and Madagascar) told Liberation News that his family had come to the U.S. in 2006 seeking political asylum. But today, he said, “my family would not get asylum” and, he asked, “What is great about America today?”

Activists from the District of Columbia emphasized how white supremacy isn’t limited to sworn fascists, but is endemic to the structures of capitalist society. Puryear, who works with the Stop Police Terror Project, noted that Metropolitan Police Department officers had been caught wearing custom-made shirts bearing white supremacist symbols not just on duty but in court! Norman Momowetu Clement noted that the name of Washington, D.C.’s professional football team is a racial slur for Indigenous people, and that its continued use as a mascot normalizes white supremacy in everyday life.

Morgan Artyukhina, of the Party for Socialism and  Liberation, told the crowd about fascism’s long history of anti-LGBTQ and anti-disabled violence, noting that Nazi talk about “genetic superiority” was also endorsement of eugenics that dismisses disabled people as inferior and disposable.

The two dozen or so Nazi and Klan members arrived at the opposite end of the park escorted by incredible numbers of police. It was obvious the fascists were only able to have marched and demonstrated at all because they had extensive police protection. The police were all that separated them from the raging fury of the antifascist crowd. The massive turnout of anti-racists was waiting for them with a chorus of boos and  chants of “No Nazis, no KKK, no fascist USA.”

Late that afternoon thunder and rain arrived, but the crowd was determined not to leave the park until the Nazi/KKK left first. Soon, the tiny Nazi/KKK gathering slinked away, still under police escort, to lick their wounds.  In reality, they had been trying to impress corporate America by taking attention away from Wall Street and placing the blame for the suffering of the working class on the backs of people of color, immigrants, LGBTQ people, disabled people and others. The corporate media is always ready with free publicity for racists, but that wasn’t going to happen this day because their organizing had the opposite effect – the anti-racist movement was energized and inspired by the strong gathering of anti-racists.

The right-wing New York Post, ever ready to promote its own brand of racism, headlined the next day in its article, “White nationalists fail to draw crowds on anniversary of deadly rally.” The fact is that they did draw crowds, but not the kind of crowd the Post was looking forward to. Other mainstream media likewise downplayed the size of the anti-racist protest – or ignored it completely.

The mass mobilization of the multinational working class is not only the best way, but the only  way, to stop fascist demagogy in its tracks. 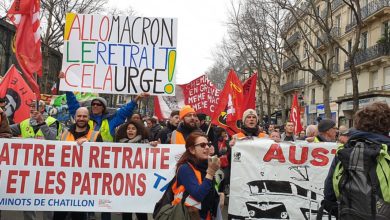