An impoverished African-American and Latino community has long fought to demand a solution to the contamination of their home. Many fear that it is too late for 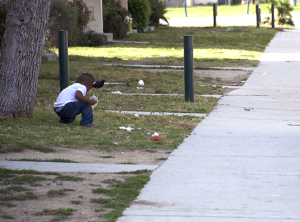 the residents of Jordan Downs in Watts who have been exposed for many years to harmful toxic substances that lie under the ground where they live.

Jordan Downs is one of California’s top 5 percent most polluted regions where more than 2,500 low-income residents, including many children and pregnant women, face a cluster of environmental and health risks. The vacant land and walled-off industrial site that lies adjacent to residential homes known as the “factory” was once used for trucking operations, steel manufacturing and waste storage that contaminated the soil with pollutants such as engine oil, diesel, gasoline and paint thinner.

In 2011, the 21 acres of vacant land were found to be contaminated with lead, arsenic, oil and chemicals that might cause cancer and damage to the central nervous systems of those exposed. Other contaminants include high levels of hydrocarbons and polychlorinated biphenyls (PCB’s) used in many industrial and commercial applications such as pigments, dyes and 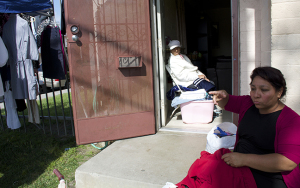 It is well known that lead exposure in children causes behavioral problems, hyperactivity, developmental delays, hearing loss and damage to the brain and nervous system. So why is the community being undermined by authorities who knew about the lead and arsenic contamination at the “factory” in 2010 as it continues to impede a deep cleaning of the whole area to eliminate toxins?

African-American and Latino people in low-income communities are more likely to suffer because racism plays a big role. Residents and activists have asked for a deep clean up of these harmful toxins of the whole area since 2010, but have been ignored. The state turns its back on communities like these as they see no political or economic benefit in helping an impoverished non-white community. African-Americans in low-income communities are also statistically more likely to suffer from lack of access to parks, recreation centers, and clean water. They are forced to live under horrific conditions under a dismal governmental support system.

PCBs can be released into the environment from poorly maintained hazardous waste, as happened at the “factory.” Once in the environment, they remain for a lengthy period of time in the air, water, and surrounding soil.

Concerned families have witnessed for many years their children climbing through a hole leading to the vacant lot where they would play and inadvertently become exposed to poisonous heavy metal in the dirt. Some 60 percent of the population in Jordan Downs are children under the age of 10.

Who is responsible for this toxic attack on people of color?

Industrial activities from Mobil pipelines are known to be the cause of such toxic waste. In 1923, the Mobil M-8 pipeline was installed in Los Angeles where it transported gasoline and crude oil until it was abandoned. The Mobil M-145 pipeline was established in 1973 and has carried diesel to this day. According to the Alameda Corridor project, an investigation took place in the late 1990s which reported the presence of petroleum hydrocarbons (TPH) in the soil and underground water, a consequence of unauthorized leaks from the M-8 pipeline.

Yet, since 2000 Exxon Mobil has failed to properly discard contaminated soil and contaminated groundwater. The only measure was taken in 2008, when a soil vapor extraction (SVE) system was installed at one corner of the Jordan Downs neighborhood behind a set of homes and has been slowly operating to burn off contaminants from the groundwater. Local residents and workers however describe the smell from the SVE as toxic itself and many fear that it is contributing to air pollution in the local area while providing but little benefit to the contaminated groundwater. A Remedial Action Plan has been implemented but it’s not enough. A full investigation and response would only occur if new buildings were set to be built on top of that soil.

In addition, Shell is also responsible for oil leaking from an underground fuel tank  on another corner of Jordan Downs, where a former gas station was located. The investigation of Shell’s leak is taking much too long and is under open-site assessment. The community fears it is too late. This fuel leak could date back as far as 1976 when the gas station was closed and is within direct vicinity of an elementary school where six people have died from cancer in the past decade.

Finally, Jordan Downs High School, wedged between the projects and Atlas Metals – a metal recycling facility – has been found to have 11 times the acceptable quantity of lead in its soil as well as arsenic. Los Angeles Unified School District claims that this amount of lead is due only to old paint. Most environmental and health scientists dealing with these toxic sites have flat-out rejected the notion that such a high level of lead is only from paint and have pointed instead to the metal recycling facility, an old lead smelting plant, and other industrial sites that have contaminated the surrounding soil. The school is repeatedly digging out hundreds of cubic feet of soil in some sections of the school site but many feel that more drastic measures are needed to protect the students and staff.

Toxic sites from industrial activities need more than lengthy bureaucratic plans that keep residents susceptible to severe health issues. The side effects caused by such indifferent decisions, made only with profit as the motive, are damaging for the environment and people. Because profit stands above people in our society, the environmental crises that humans face are escalating rapidly every day.

Seizing the profits is the only solution

Capitalism is central to environmental crises whether they are felt globally or locally. The oil and gas industry denies that fracking contaminates drinking water wells with high concentrations of methane, though research has begun to prove otherwise. Gas producers leak fugitive emissions from their production facilities into the atmosphere over the United States and other imperialist countries. Greenhouse gases like methane, nitrous oxide and carbon dioxide have the most direct influence on the weakening of the ozone layer. Hazardous toxins are spread in the soil, water and air as global capitalism dumps waste into the most impoverished nations and neighborhoods.

Potential solutions to these problems are the least of the concerns of the big oil corporations. Their only motive is to maximize profits while disregarding the health of the poor people who have to live under hazardous conditions. Big corporations take advantage of the people who are poor. All the while, these families have to work low wage jobs to be able to feed and clothe their families and don’t have the option to move away from polluted neighborhoods.

Pressure against these big corporations needs to be swift and relentless. People now more than ever need to seize control of the profits of big oil corporations. The profit motive, continuously poisoning soil and water while endangering the most vulnerable and poor, has to be fought. By seizing, or expropriating the assets and profits of the major oil companies that are owned by the richest 1 percent, and putting those funds in a democratically controlled economy that is for the people, we can have a system that does away with health and safety risks of toxic pollution to the working class.

Exxon-Mobil, Shell, and the other criminally negligent industries in Watts can be forced to clean the community and compensate the people already affected by their contamination if the people unite and demand it.