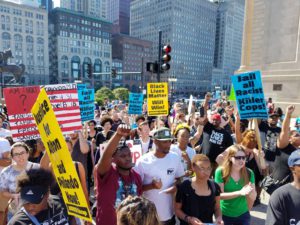 On Saturday, July 9 thousands of people in Chicago participated in waves of protest throughout the day, culminating in a dramatic shut down of the annual Taste of Chicago. Militant marches continued throughout the evening. The Black Lives Matter protesters demanded an end to police terror and the racist murders of Black people both in the city and throughout the country.

The recent police executions of Philando Castile and Alton Sterling have sparked this latest outpouring of outrage and resistance to the continuing epidemic of police violence.  Both men’s final moments were captured in shocking detail on videos which have now left an indelible imprint on the minds of people of conscience across the nation.  The time for action is clearly at hand.

With these thoughts in mind, the largest gathering of protesters began to gather around 4 PM on Michigan Avenue a few blocks outside the Taste of Chicago.  The people chanted and held banners and signs demanding justice and accountability for the taking of Black and Brown life.  Organizers of the youth-led, multi-national coalition explained that there can be no business as usual, and especially, no profit for the city and the elites of Chicago (exemplified by the Taste, which draws in huge numbers of tourists, and their dollars, each year) while Black people are being gunned down in the street.

Around 4:30, the growing crowd began to march to the Taste, enthusiastically chanting “No Justice, No Peace!” and claiming the streets.  On arriving at the gate, protesters were met by a line of mounted police who initially refused the crowd entry to the free and public event.  After a brief standoff, protesters entered the Taste when their unity and determination became clear.

After marching throughout the Taste over 1,000 strong (all the while drawing in passersby who, upon seeing the large contingent, immediately joined in with the marching and chanting), protesters continued marching downtown through the afternoon and into the evening.  Major intersections were occupied, and large streets taken over by the people shouting “You can’t stop the revolution!”

Saturday’s action was only the latest event in a rising tide of resistance dedicated to ending the racist oppression of Black people and their communities. This movement gains strength from its sheer necessity as a matter of survival for those brutalized day in and day out by the police.  As a result, it will surely continue to grow until it has the power to change the system itself.

Until then, “No justice, no profit!”