Across the nation, the evidence is clear that socialism is attracting diverse, growing interest and participation. After a long period of unfavorable organizing circumstances following the collapse of the socialist camp, millions are once again taking an interest in socialism and looking to get involved in socialist organizations to combat the crisis of capitalism and rightwing oppression.

A positive example of this growing movement took place on August 4 and 5 as the Albuquerque branch of the Party of Socialism and Liberation hosted a two-day conference on Why We Need a New System.  An overflow crowd of 130 participants gathered in Albuquerque to hear presentations, participate in discussions and formulate conclusions on how to rebuild momentum for a socialist future.

Party comrades from across the Southwest—including Colorado, Texas, Utah, Arizona and southern New Mexico—as well as other parts of the nation joined with other radicals interested in joining this growing movement. They listened to a broad range of presentations covering all aspects of the class struggle: resistance to domestic oppression, interpretations of  how the U.S.  is fomenting dangerous international crises and participatory discussions of current issues and strategies for building a larger and more powerful movement.

Concluding the first day’s events was a special commemoration of the heroic life of Dennis Banks, founder of the American Indian Movement and PSL’s 2016 vice-presidential candidate in the state of New Mexico. Many are unaware of the struggles that Banks was involved in the latter part of his life including organizing against widespread addiction and high suicide rates that affected impoverished Native communities. 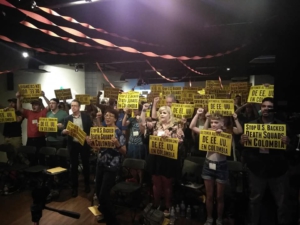 As part of the International Days for Peace in Colombia called for in early August by the Alliance for Global Justice, the Conference also sent a videoed message of solidarity to the people of Colombia calling for end to U.S. backed death squad terror targeting leftists and progressives.

The excitement and camaraderie engendered by the first day of the conference continued into the second for a day of internal actives and workshops held at the Revolutionary Organizing Center in Albuquerque. Many of these participants are new to the movement and the organization. So party members spent the day listening and discussing a wide range of fundamental issues. Organizing strategies, effective use of social media, the importance of writing for Liberation News and building an independent socialist media, how to design and execute effective local actions and campaigns were among the many topics covered.  Again, participants engaged in lively discussions all of which continued to build the growing solidarity begun by the first day of the conference.

The second day ended with two very important developments. There was a powerful discussion about Leninist tactics and strategies in the current period.  After the discussion, in response to the assassination attempt organized by the U.S.-backed rightwing Venezuelan opposition against head of state Nicolas Maduro, all comrades joined in a joint communique and impromptu group photograph to express our close and supportive solidarity with the people of Venezuela, their leader Nicolas Maduro and their ongoing revolutionary struggle.

There could not have been a more fitting conclusion to this amazing gathering. The conference not only provided clear evidence of why we need a new system and why it is so important to join this powerful movement, but that it is indeed possible to build a socialist movement right here in the heart of world imperialism!  The conference underscored street level proof that PSL walks the walk when it comes to turning so-called “red states” truly red.