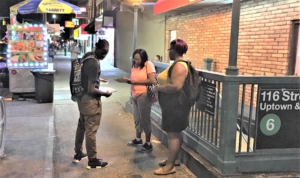 The petition reads as follows:

“Say NO to the plan to “up-zone” 96 blocks of East Harlem to allow 30-35 story buildings, mostly of market-rate apartments. This will destroy the fabric of what has historically been an affordable community serving immigrants and low-income people of color.

“The Mayor and Speaker’s rezoning plans are both middle-class and luxury housing plans that will serve developers and speculators, not the community’s needs.

“To meet the housing emergency and end displacement, we demand:

“A new housing plan with 100% affordability for existing residents.

“Using the area’s many empty buildings and vacant lots to expand affordable housing.

“The time to act is now! 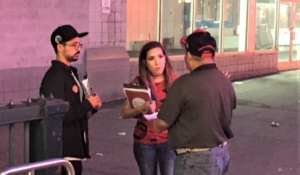 The New York City Council votes on the proposed rezoning in November. Due to pressure from community members and activists, Manhattan Borough President Gale Brewer has stepped back somewhat, saying some changes have to be made to include the concerns of East Harlem residents. Some suspect this move was made to just pacify the critics, and that the City Council will still try to push through the pro-business anti-working class bill.

Too much to lose

Recent examples of gentrification in New York districts like Williamsburg and Chinatown show how much is at stake with this proposal. New Yorkers have seen wonderful neighborhoods disappear, the soul and vibrancy they once had ruined by commodification and new residents alien to the working class communities that created them.

All petitioners this reporter spoke with were personally vested in stopping the rezoning. “As an organizer who lives and works in Harem, and provides services to children and families in Harlem, I realize how important it is to preserve the community and the culture it represents,” explained Michaela Warmsley, an organizer with the Justice Center en el Barrio. “I see first hand how the rezoning path is already affecting families I work with and we cannot let it continue any further.”

The public received the petitioners very well and overwhelmingly supported the action. One group of volunteers petitioning near the subway met three young men heading out for some Friday night celebration. They signed, and stayed for a while. They described to petitioners how important this neighborhood is their families, who had emigrated here from Puerto Rico and the Dominican Republic in the 1950s and 1960s. They hailed passerbys and urged them to sign the petition.

While some community members weren’t aware of the rezoning plan, they were very aware of the gentrification many neighborhoods in New York City are facing. Some were not very receptive to being approached at first, but once they realized what was being discussed their interest immediately increased. From shop keepers, to street vendors, young and old folk alike, everyone had an interest in stopping this looming threat.

The petitioning is just one of many efforts to show that the residents of East Harlem are absolutely against the rezoning of their neighborhood, and they will hold politicians accountable who go against the interests of their constituents.

The story of gentrification in New York City will sound very familiar to people around the country. This issue affect residents in major cities from Washington, D.C., to Austin, Texas, to Seattle, Washington. There is a nationwide housing crisis ignored by both local and federal governments. This is why the issue of affordable housing is raised in the recent manifesto released by the People’s Congress of Resistance.

“It’s important for the People’s Congress of Resistance to be involved in actions like this,” Elizabeth Birriel, petitioner and PCoR organizer told us. “We are a coalition of grass roots activists fighting in our communities, but we also recognize we need to form connections with other grass roots organizations across the country. We need to unify our diverse struggles and fight together against the system that only serves the wealthy elite.”

There is much work to be done with petitioning and other efforts to ensure the New York City Council does not go through with this rezoning proposal. Local residents looking to get involved can reach the Justice Center at 212-907-7118.

People nationwide can get involved with the People’s Congress of Resistance .

Acting together the working class can defend its neighborhoods. Together we can win!