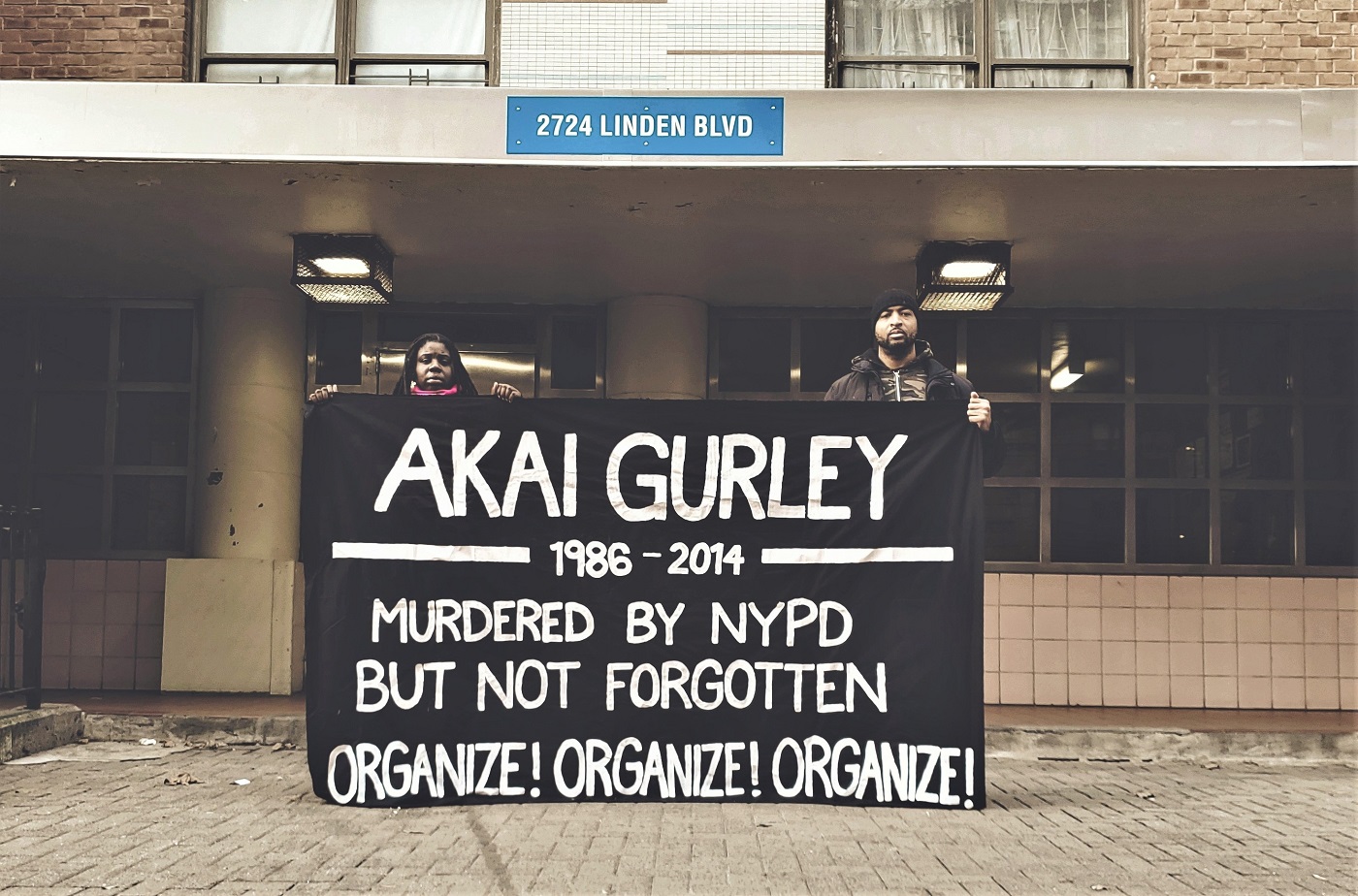 Members of the ANSWER Coalition and No New Jails did two banner drops on Nov. 20 to mark the fifth anniversary of the killing of 28-year-old Akai Gurley by a New York City Police Department Officer Peter Liang.

The first drop was at Broadway Junction subway station in Brooklyn in light of the constant police violence against community members there. The second drop was in front of 2724 Linden Blvd, the public housing building where Akai Gurley was killed on Nov. 20, 2014. Participants in the action made it very clear that they would never stop honoring and demanding justice for Akai Gurley and all victims of police terror.

Akai Gurley was needlessly shot and killed in New York City Housing Authority’s Louis H. Pink Houses in Brooklyn in a dimly lit stairwell during an illegal vertical patrol by NYPD officer Peter Liang. In vertical patrols in NYCHA buildings, police officers were allowed to stop, question and frisk anybody inside of one of these buildings with little to no regard for privacy or Fourth Amendment protections.

Peter Liang not only shot Akai multiple times, but did not attempt to help Akai Gurley even though Liang was a trained first responder. Instead, as Akai lay dying, Liang went to look for remaining bullet shells, and called his union representative.

Rapid response and community mobilization started immediately after news broke of  Akai’s killing. This was not just in Brooklyn. Angry demonstrations around the country against racist police murders of unarmed African-Americans added Akai’s name to those of Eric Garner, Michael Brown, Freddie Gray, Rekia Boyd, Sandra Bland and others.

Hertencia Peterson, Akai’s aunt, became a front line fighter demanding Justice for Akai and his family. Because of this non-stop organizing preceding Liang’s trial, he received a guilty verdict, until then-District Attorney Ken Thompson wrote a recommendation to Judge Chun motivating for no jail time for this guilty cop but community service instead.

“Nov. 20, 2014, will be forever etched and engraved in my mind: an empty chair at the dinner table, your infectious smile and laughter, the emptiness of your mother not hearing your voice on the phone or simply  popping up at the bus or train station.

“Your death have left a void in the family, memories are all that’s left. I know you’re looking down, smiling. You haven’t received  the justice was due to you in this world, but just know you’ll receive it in the afterlife. God’s Justice will prevail…

“Your life was cut short by a coward with a badge given a license to kill anyone that doesn’t look like him.  If I could be granted one wish, it  that would be for you to comfort your mom, and dance with your daughter.

“Forever in my heart. Forever in my thoughts. Forever 28! I Love you and miss you Akai, my grasshopper, you were and will always be an awesome nephew.

“HANDS UP TO THE SKY !! WE’RE DOING THIS FOR AKAI
“Until we meet again, my beloved nephew, continue to Rest In Power!
“This entire system failed you, I’ll make sure they remember your name #AKAI GURLEY!”