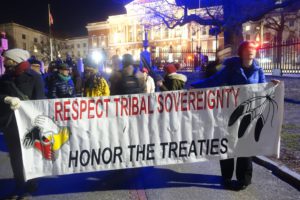 On Jan. 25, the Medicine Wheel Solidarity Network and Democracy Center, acting in solidarity with Native American Water Protectors at Standing Rock, rallied on the Boston Common across from the Massachusetts State House. They then marched to a nearby branch of TD Bank, a bank that is funding the pipeline and continued on to Macy’s shopping area, to protest President Donald Trump’s  signing and announcement of his issuance of a Presidential Memorandum telling the Secretary of the Army to end what he called “incredibly cumbersome” environmental reviews, urging approval of the construction and operation of the Dakota Access Pipeline.

Liberation News was able to speak with a Jasmine Gomez, a queer activist from Puerto Rico who ardently supports the work of water protectors and other allies in the struggle for self-determination of Indigenous peoples, on why she took the streets.

Jasmine: “I came out because we need to learn how to respond fast and show up for our allies whenever Trump enacts any of his draconian executive orders that harm marginalized communities. With DAPL and the Keystone Pipeline, Native and Indigenous communities are being directly threatened, as well as the Earth. It’s important that we use our able bodies, when possible, to respond with physical resistance.”

The Dakota Access Pipeline was halted by President Obama before he left office, but only after months of protesting and occupation by various indigenous tribes from all over the nation as well as other progressive people outraged at these attacks. The incoming Trump administration, which owns stock in the energy corporations involved in the construction of the pipeline has declared that continuing the construction will “create jobs” for Americans, but the reality is much more insidious than just vague “job creation.”

Capitalism pits the interests of workers and oppressed people against each other while the bosses make their profits, and in this case super-profits, from the destruction of the environment and human life. It is a suicidal mode of production that pits energy workers against defenders of the environment and planet’s resources so the former can get “jobs,” but in the end, we all lose out because eventually our planet will be unlivable for everyone.

Under capitalism, the environment is a part of the process of commodification. This process involves human labor and nature. In the case of the Dakota Access pipeline, short-term jobs will be created temporarily to the detriment of Indigenous sovereignty, self-determination, and treaties, and to the natural environment. Since 2013, North Dakota has seen an increase in oil spills because of incessant drilling—1,607 spills in 2013 and 1,846 in 2014. In addition to the pollution of the waters and natural environment, the majority of those who are victimized by these spills are the Indigenous, who are left to ingest and deal with this heavily toxic water.

The way forward out of this quagmire of capitalist exploitation and settler colonial terrorism upon Indigenous people is the united efforts of the masses with observance of the right to self-determination for Indigenous peoples. Not only should the pipeline construction be halted indefinitely, but also all treaties with Indigenous nations should be upheld and honored. Moreover, settler colonialism and capitalism must be targeted as the source of this oppression and exploitation. Until capitalism is dismantled and replaced with revolutionary socialism—when the political and economic power is in the hands of the working class and the oppressed—oppressed nations will continue to be targeted and subjected to genocidal policies so corporations and the ruling class can make super-profits off our labor and the Earth’s resources.

Donald Trump is widely unpopular and his agenda will only continue to strike the raw nerve of the masses of working and oppressed people. Capitalism cannot be made “green” or “sustainable.” The Party for Socialism and Liberation believes, as our program iterates, that only through a socialist transformation of all of society can environmental sustainability, the right of all oppressed nations to self-determination, and the interests of the working class be defended and actualized.