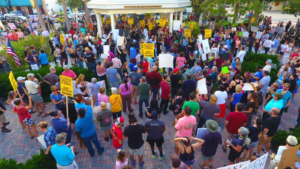 On Monday, August 21, hundreds of demonstrators descended on Manatee County Courthouse in Bradenton, Florida to demand the removal of its 93-year-old Confederate monument. They carried signs saying, “Smash white supremacy!” and “Black Lives Matter” as they chanted “Hey hey, ho ho, this monument has got to go!”

The protest, called by Party for Socialism and Liberation, Answer Suncoast and Black Lives Matter Manasota, came in the wake of the white supremacist terrorist attack in Charlottesville, Virginia and the renewed struggle to take down Confederate and colonial monuments around the country.

Symbols and statues commemorating slavery and racism have come down in Gainesville, Tampa, St. Petersburg and West Palm in the last two weeks, while important campaigns continue in Tallahassee, Jacksonville and other Florida cities. Last month, Orlando also removed its Confederate monument from Lake Eola Park. 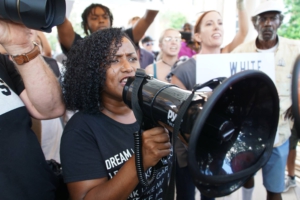 “Confederate monuments were built around the U.S. during two booms: during the Jim Crow era and during the 50’s and 60’s as a backlash to the Civil Rights Movement,” said Ruth Beltran, a member of Party for Socialism and Liberation. “The effort to remove them is about more than symbolism; it’s about understanding history and acknowledging the injustices of the past as we address those of today.”

The granite obelisk near the steps of the courthouse was dedicated in 1924 by the Judah P. Benjamin Chapter of the United Daughters of the Confederacy. It commemorated Stonewall Jackson, Robert E. Lee, Jefferson Davis and the “Memory of Our Confederate Soldiers.”

The United Daughters of the Confederacy is a hereditary association of Southern women established in 1894. The Southern Poverty Law Center lists them as a neo-confederate organization—a hate group based on historical revisionism and thinly veiled support for white supremacy. The local chapter’s namesake, Judah P. Benjamin, was a wealthy slave owner, the Confederacy’s Secretary of State and a prominent spokesman for slavery.

“The right place for this statue is not outside of a courthouse, a place of justice, because it represents men who sought to hold up one of the greatest injustices of our time: the rights of white people to own Black people,” said Greg Cruz, a member of the Suncoast chapter of Answer Coalition. “The right place is not on any kind of public land, as presumably tax dollars— including those of people descended from slaves—are allocated to its upkeep.” 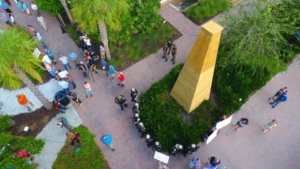 During the protest, right-wing counter-protesters gathered near the 22-foot plywood cone protecting the monument. One group held the flag of the League of the South, a white nationalist organization based in Alabama. Helping protect the monument was Manatee County Sheriff’s Office, heavily militarized, with snipers on the courthouse rooftop and a helicopter circling overhead.

When a far right provocateur from Jacksonville, William “Gary” Snow, snatched an Antifa flag from a local activist, deputies arrested the Antifa activist, Daron Hays. While Snow burned the flag, deputies placed Hays in shackles and zip ties behind his back for 6 hours before transporting him to the jail. Meanwhile, they allowed Snow to threaten others for over an hour before arresting him as well.

The day following the protest, Manatee County commissioners voted 4-3 to remove the monument in a tense and heated meeting. Of the four commissioners who voted for removal, three cited public safety concerns, rather than addressing racism, as the major factor influencing their decision. As well, they discussed concern for their own safety and “not being bullied” by “spoiled brats, spoiled children,” Commissioner DiSabatino’s phrase for local citizens.

The notoriously corrupt commission made clear what compelled their vote: organized groups of people showing up in the streets, nationally and locally. As Chairwoman Betsy Benac told the room: “I was hoping it was a lot of bluffing. But what I saw…people are ready to carry through. They’re showing up. All of our eyes are being opened to this stuff going on around the country…These are crazy times.” 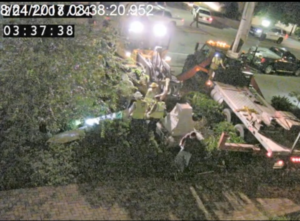 Two days later, at 3:30 in the morning, workers took down the monument. While being lifted, the monument cracked above the base and toppled to the courthouse lawn, shattering again 4 feet from the top. Surveillance footage of the collapsing racist statue received thousands of views online. The chunks of Manatee County’s Confederate monument now collect dust in storage, supposedly waiting to be repaired and placed somewhere that offers proper historical context.

The victorious struggle to smash Bradenton’s monument has brought more fighters into the growing movement against white supremacy and racism—an ideology and system built and perpetuated by capitalist society. Local progressives and revolutionaries have vowed to increase the fight in Manatee County, where access to justice, freedom and basic rights still all depend largely on race.