The “coup king” is naked. Last week, the media published a series of audio recordings by the golpistas exposing them as plotting the coup.

There was explicit talk about the Supreme Court and military involvement, as well as many other connections that the opposition against the impeachment knew was happening. Now, there are no more two-sided arguments. The narrative has changed, and in everyone’s eyes, it is a coup. Some are amazed to see the golpistas releasing audio recordings that can put their own coup in danger. But this is the nature of the golpistas. They think only about themselves and will stab anyone in the back to make sure they are not the ones getting screwed.

The first ones they stabbed were the people by eliminating labor rights and destroying social services such as housing, health and education.

They did it because they want recognition from the United States, who they serve. They dream of being part of this “top elite” they admire so much. But it is an illusion that the imperialist elite from the U.S. want them to believe in order to give away our country.

The golpistas want to be in Manhattan or in Paris shopping and eating with the “civilized” people of Europe and the U.S. They are so colonized that a judge even quoted the U.S. constitution when justifying his abuse in an investigation against Lula.

And they hate the poor. Brazilian capitalism is strongly connected to slavery. Not only do we have slave-like conditions going on in plantations, construction, mines, factories, charcoal factories and so on, but there is also a whole “housemaid” relationship that until very recently these domestic workers had no rights. They were pretty much living under slave-like conditions.

I would estimate there are hundreds of thousands of cases like this in Brazil, cases in which children from the countryside are taken by families from the city to work for them. They claim it will be good for the child’s education, but in the end this 14- or 15-year old girl, sometimes much younger, is confined, living with this family and working from the time she wakes up until the time she goes to bed under every type of abuse.

And this is “normal” in Brazilian culture. There are many women working in such conditions—extremely long hours, no rights, no breaks. The Workers Party included them as part of the “working class” protected under the constitution’s labor rights. At the time, the Minister of Women’s Rights, Racial Equality and Human Rights Eleonora Menicucci said, this law “ended slavery inside the households in Brazil.” 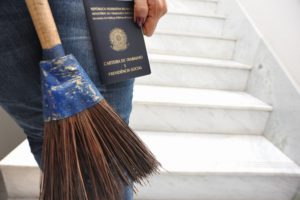 A lot of middle class families had to start paying extra for every hour after the worker’s 8-hour per day shift. Domestic workers received the right to one month paid vacation, social security, maternity leave and all the workers’ rights protected by the constitution.

Actions like this affected Brazil culturally, affected society in a way that we are still coming to understand. It really pisses off the capitalist elite that has always been in power. It was seen as an offense to them.

There were many empowering actions like this, although we still have much more that needs to be done. The Workers Party did start to shape a different Brazil.

I was reading an interview with Franklin Martins who in the 1960s was part of the armed struggle and participated in the famous action that kidnapped the American ambassador in exchange of political prisoners. Co-founder of the Workers Party and Lula’s press secretary, he said:

“This coup had an enormous impact on all of us. I am living my second coup. During the first one I was 15-years old. I am now almost 70. The first reaction, like Chico Buarque said, ‘coup again, no way.’ I am convinced that we are not dealing with the same type of coup. Brazil is a country much more mature, conscious, organized and willing to fight for their rights. This coup won’t have the longevity of the dictatorship from the 60s.”

He is right. Our country obtained the right to vote through a struggle full of death and torture. And then that brought a neoliberal government that continued policies that would remove rights and benefits from the people, that killed the Indigenous people, poor Black people, campesinos, street kids.

After the dictatorship of the militaries came the dictatorship of neoliberalism. But we kept on fighting and since the Workers Party was elected 13 years ago, we have achieved a lot. This had an enormous impact on the country and our memory is very vivid so we know what is coming and we won’t let it happen again. This is a factor that the elite is ignoring.

The Minister who had to resign, Minister Juca, was in one of the audio recordings saying, he “checked with the Supreme Court and the military” about removing Dilma from power.

He was the president of FUNAI, a special foundation created by the federal government to “take care” of the Indigenous population in Brazil. During this mandate, he opened the states of Amazon and Para to mineral extraction, destroying the forest, displacing people, spreading disease, increasing prostitution and affecting tribes’ culture. Military officer takes Yanomami women contaminated with malaria. Fifteen percent of the population died because of the disease.

The Truth Commission in Brazil believes that Juca’s actions as president of FUNAI caused the death of tens of thousands of Yanomami in the 80s. This sentiment was so strong that the Yanomami tribe had a ceremony asking for him to be removed from the government. The next day the audio came out and he was forced to resign.

The Yanomami’s ritual is part of a memory that all different sectors of society carry with them. The landless workers will tell you about the massacre of Carajas or those who were tortured for their ideas like President Dilma herself.

We are in a different world and we know that we don’t want to go back anymore. We also learned that it is possible to have our country serve the people and we have all grown with it.

This is another important lesson from the Lula era. He used to repeat this in many of his speeches for the poor to understand, “When the elite were governing, they would say it was impossible to make ‘more houses’ or ‘more education.’ This is all a lie because I am doing it and much more could be done.”

Now the “coup king” is naked and the people are out in the streets holding an “escrache,” or public shaming, against him.

We are not seeing many news agencies documenting what is happening in the struggle against the coup in Brazil. You see a lot of news about the golpistas and what they are doing, but not that much on what the people are doing.

There are tens of thousands of people protesting in the streets of Brazil every single day since it all started back in March.

Hundreds of schools around the country are occupied by students—in Rio alone there are over 73 occupied schools. The parents and teachers, who are against the coup as well, come and cook them lunch, and hold special classes and debates about the coup. Universities are also occupied by students. School in Rio occupied in protest against the coup.

Offices of the Ministry of Culture around the country have been occupied. 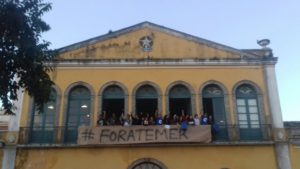 Ministry of Culture office in Florianopolis occupied in protest against the coup.

Artists have held many concerts all around the country, made videos, created sambas against the coup—all different kinds of expression. Intellectuals organized an “escrache” against Cardoso in New York, which he ran from canceling his presence in the event.

The “escraches” are happening everywhere. The golpistas have no peace. Aecio Nevez, one of the main coup plotters and corrupt senator from the PSDB Party, was in Leblon Beach in Rio with his family when a woman came filming with her cell phone yelling, “Attention, golpista. Watch out, golpista.” He is shown picking up his things and leaving the beach.

Golpista president Michel Temer was spending the weekend with his family in Sao Paulo and 30 thousand homeless workers marched towards his house to not let him rest. The first social program from the Workers Party destroyed by the golpista government was Minha Casa, Minha Vida (My House, My Life), directly affecting these workers. The police freaked out and declared the area a national security zone closing down the streets in the area. 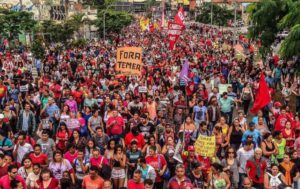 The workers marched there anyway and started to set up a camp in a square near by. Later on, the riot police came with water tanks and tear gas and forced the workers out. The contradiction here is the governor of Sao Paulo, Alckmin, led the right wing protesters’ camp in Paulista Ave. (our Wall St.) for two months during Dilma’s impeachment voting process and the workers couldn’t stay one night.

The day after the audio came out, senators from the left had dinner with Dilma where they said there is a possibility they will gain votes to her side for the next round in the Senate and the impeachment would be blocked and she could return to her seat. They also said they told her that she must change her economic policy and her policy of concessions if she returns.

This audio has definitely made not only Temer weaker, but the congress as well. By stopping this and bringing her back, the congress might think that they can get out of this situation still looking good in the eyes of the people and the international community.

The thing is that none of it is enough. There are still strong forces at play in this coup that the people will have to stop. The audio recordings reveal the Supreme Court as the main player behind the coup. All golpistas in the recordings are afraid of the Supreme Court, because by controlling the investigations, they have extreme power. And they hate Dilma and the Workers Party even though a good number of them are sitting there because of Dilma and Lula.

We also have the United States, which is a big player. They are playing the same strategy played in Honduras and Paraguay, a parliamentary coup, where the United States sits aside and pretends nothing illegal is happening and that it “has faith and trust in the institutions of that country.”

Wikileaks has shown the coup president Michel Temer in its diplomatic cables as an informant to the United States. The foreign minister of the golpista government is Jose Serra, who has a record of serving U.S. interests as well. He was a candidate against Lula (2002) and Dilma (2010), and on both occasions he met with Chevron to plan how to sell Petrobras. His first international trip was to Argentina to meet President Macri to discuss “improvements for Mercosur.”

But arriving there, he was met with Argentinians prepared to “escrache” him and denounce him as a golpista. He had to go through the back door and even then was surrounded by protesters.

These manifestations against the coup continue to grow and expand within society, happening even internationally, showing these golpistas that they won’t have one minute of peace.

I agree with those who lived the 1964 coup, and are living this one, it’s not the same Brazil.