You know who someone is by the way they act when it really matters.

On March 11, the night we shut down Trump’s speech in Chicago and scored a victory against racism, Clinton released a statement that scolded and blamed the protesters. At the moment of battle, Clinton did not side with the multinational youth-led protest that defeated Trump. She accused the protesters of being violent and demanded that people respond passively to Donald Trump. Like the rest of the establishment, she opposes the new wave of struggle against racism. 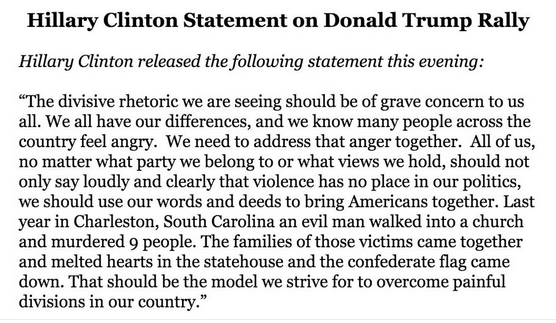 I’ll expand on my logic: If Trump were to win, someone like Gloria La Riva, like she has been doing for decades, will hit the streets with the masses of people to fight racism. On the other hand, Hillary would probably congratulate Trump and call for America to unite. You know that’s true. After all, she sat in the front row at Trump’s last wedding.

Clinton is not with us in the struggle against the white supremacist resurgence. She will absolutely not join Black people, Latinos and Muslims on the front lines.

Whether or not Trump wins, racism will still grow–the cork is off that bottle–and Clinton and the establishment will not be fighting with us–that much is certain. And, fight we must. White supremacy and the Trump movement have not arisen out of thin air or through the talent of Donald Trump. Racism is spreading as a direct result of the neoliberalism and austerity shoveled on top of the population by the Republican and Democratic parties. The crises in society are widening and the racists seek to take advantage. The only thing that will shut down the racists is a struggle that confronts them and the whole system.

Clinton conspired to stamp out the movement behind Sanders because that’s who she is. She is the corrupt, racist, imperialist establishment that is grinding workers and the oppressed into the ground. Backed by Wall Street and the neocon hawks, she has virtually the whole system behind her. Progressives and revolutionaries should fight and vote against the system in 2016. We should work together to continue the revolution.