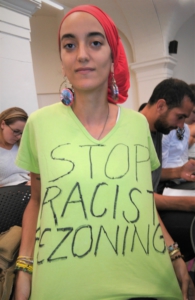 For three and a half hours on Aug. 23, the New York City Planning Commission heard them speak. A larger room had been booked to accommodate the crowd for the mandatory public hearing. Nearly 100 people signed up to have their say.

The answer? The overwhelming majority said a loud “No!”

Community leaders, home owners, renters, those who live in city-subsidized housing, teachers and other workers in the community stood up and gave heartfelt testimony on how the rezoning for luxury housing would force current residents out, raise rents all around, and destroy the dignity and integrity of this Latino working class neighborhood. Some who took the floor brought petitions signed by hundreds of residents rejecting the proposal and calling for 100 percent affordable housing instead.

New York is in the throes of gentrification. East Harlem is one of the few areas of Manhattan where working class people can still live. The rezoning plan for this neighborhood is being pushed by Mayor Bill De Blasio, fronting for giant real estate developers, speculators and Wall Street, which view housing as a commodity to bring them profits, not as a human right.

The New York government has gone to great lengths to publicize a sweetener to the rezoning package–a few million dollars for token cultural, school, and park improvements, and 20 percent “affordable housing” in the luxury units. Meanwhile, the new construction would destroy thousands of housing units, and the so-called “affordable” units would still be way out of the price range of El Barrio residents.

It was a bizarre spectacle at the Aug. 23 hearing, to see speakers in favor of the rezoning proposal describe these sweeteners in the most glowing of terms. They were almost all expensively suited city commissioners and deputy commissioners.

But community members and organizers were not falling for it. Anger built as Greg Bishop, Commissioner of Small Businesses and Maria Torres-Springer, Commissioner of the Department of Housing, Preservation and Development spoke in favor. Some shook their heads at the shame as representatives of the Administration for Children’s Services (child welfare) and Workforce 1 (city unemployment agency) claimed the rezoning would “help” East Harlem residents. Finally scornful laughter erupted from the audience when a representative of the city housing authority spoke in favor of rezoning, but could not describe the capital needs of city housing in East Harlem or how rezoning would help city housing residents.

“Affordable” housing out of reach for El Barrio residents

Marina Ortiz from East Harlem Preservation was greeted with applause when she took the floor and announced that more than 900 East Harlem residents have signed a petition opposing the rezoning plan. The petition, sponsored by her group and the Justice Center in EL Barrio, demands “a new housing plan with 100 percent affordability for existing residents, using the area’s many empty buildings and vacant lots to expand affordable housing, strengthening tenant rights and services to stop landlords’ abusive displacement strategies.”

Ortiz pointed out the city’s so called “affordable housing” was middle class housing, and did not reflect the needs of the community.

Juan Peralta from Justice Center in El Barrio said that while gathering petition signatures, “We spoke to people who didn’t know about the public hearings or the community board. People who were not elected are choosing whether or not to sell out East Harlem. Decisions are being made by the rich and the real estate developers…These meetings are being held behind the people’s backs.”

Further making this point, Movement for Justice in El Barrio, an immigrant-led neighborhood group which usually attends hearings in large numbers to testify against rezoning, sent a letter to CPC chair Marisa Largo protesting that the hearing was held outside the neighborhood and at 2:00 pm, a time when many with a stake in the rezoning are at work.

Speakers from Community Voice Heard gave personal testimony of increased landlord harassment, the total neglect of maintenance in city run housing, and the structural damage high-rise construction causes to adjacent family-owned and rental buildings, some of it irreparable.

Kaila, an artist living in El Barrio, called the rezoning plan “colonization” She compared it to the U.S. colonization of oppressed countries that created the economic hardships that drove workers to come to the U.S. and settle in East Harlem.

Rachel Silang, who teaches in East Harlem told the commissioners, “If you think for one minute that rezoning in East Harlem is going to make it so that we have less homeless students, you’re wrong…you’re absolutely voting to make my students homeless.” She added, “No amount of cultural programs, no amount of preserving things here and there is going to change that reality—that our people need affordable housing.”

Among those testifying against the proposal was Manhattan Borough President Gale Brewer, who said the mayor’s rezoning plan ignored the input of East Harlem residents. Brewer voted “no” to the proposal without conditions after a public meeting that she convened in July on the zoning proposal turned into an angry demonstration against the proposal causing her to end the meeting early. Her vote, however, is non binding. It remains to be seen if she will do more to oppose the rezoning.

Speaking in favor of the rezoning was an El Barrio resident and member of the trade union SEIU 32bj. He maintained that high rise buildings would bring jobs for this union, which consists of janitors and doormen. Not considered, however, was the much large number of jobs of janitorial and maintenance jobs that could be generated if the city-run housing in El Barrio were brought up to maintenance standards. East Harlem has the highest concentration of public housing developments in Manhattan.

Did the City Planning Commission listen?

The message of today’s hearing was a loud “no” to rezoning. But did the City Planning Commission listen? And how will it vote? This commission is not an elected body responsible even in name to the people. The 12 member panel is appointed, half of them by the mayor. Even a quick Google search reveals that many commissioners are adept at turning “development” into cash cows for the real estate industry at the expense of the people.

The commission has until Oct. 2 to either kill the rezoning proposal or approve it and send to the City Council, which would then vote on it in November. The opposition is not holding its breath. “We will continue to organize until we get a strong NO on rezoning and until there’s 100 percent affordable housing!”said Silang.

Opponents of gentrification from the New York metropolitan area urged to joining the petition brigades by phoning the Justice Center at 212-907-7118. Gentrification, and the rising cost of housing, affects all working people.

The baldfaced collaboration of the New York City government with big real estate is just the latest example of how existing government does not representing working people. This is why many local organizers will be attending the People’s Congress of Resistance Sept. 16-17 in Washington DC. This new body will strive to truly represent grassroots’ struggles.