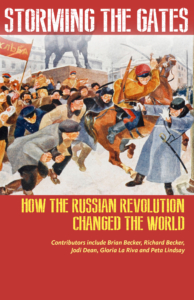 As we approach November 7, 2017, communists and progressive people the world over prepare to commemorate the centennial of the Bolshevik Revolution. Yet as Storming the Gates: How the Russian Revolution Changed the World makes abundantly clear, this is no time for solemn or romantic nostalgia, but rather for a critical celebration of a revolutionary event that continues to shape our present day. The centennial is, in other words, not about 1917 but about 2017 — not our past but our future.

This latest book from the Party for Socialism and Liberation crystallizes the Party’s forward-looking perspective on the Russian Revolution. Written with revolutionary optimism, the book makes clear why, even though it has been gone for a quarter of a century, it is necessary for every communist and revolutionary to study, understand and learn from the Soviet Union, the first manifestation of socialism. And as a collection of writings by organizers with deep roots in a variety of local, national, and international struggles, every page speaks to the deep relevancy of the Soviet Union to our practical activity.

The chapters in the book cover a range of key issues, texts, and theories that unpack the Bolshevik Revolution not as an event, but as a dynamic and complex revolutionary process. In what follows, I articulate a few of these themes to give a sense of the volume’s import and its urgency.

Revolutionary leadership before and after the revolution

The success of the revolution hinged on the Leninist party, a disciplined organization of professional revolutionaries that incorporates and advances the collective experience of struggle. Revolutions are necessarily chaotic and unpredictable. The party is the body that navigates these twists and turns, as well as the various interests of both competing and allied social groups, through clear and decisive analysis and action. Nancy Mitchell’s chapter examines the role of revolutionary leadership between the February and October revolutions of 1917. She explains how Lenin and the Bolsheviks were able to build an organization capable of enduring repression, accurately gauging the coordinates of the moment and providing the “clarity of vision” (p. 57) needed to attract the masses of workers and to seize the opportunity for insurrection.

In the book’s Introduction, Brian Becker attributes the vibrancy of revolutionary enthusiasm to the Party’s “frankness and openness about the problems facing society, the government, the economy and the Party” (p. xv). This openness invited the participation of the masses of people, truly de-professionalizing politics and making it the habit of everyday life. According to Becker this contrasts with the makeup and style of the leadership toward the end of 20th century, which by then was not only older in age, but disconnected personally and even politically from that initial explosion of revolutionary energy.

Jodi Dean final chapter draws out another element of revolutionary leadership: that it is based on the “actuality of revolution.” Drawing on Georg Lukács, she argues that the necessity of revolution structures “every decision, every tactic, every compromise” (p. 133), no matter how small. In this way, the party also sustains and communicates the actuality of revolution through everything it does. Consider that at the first meeting of the Third International in 1919, there were “only 55 delegates, representing 19 countries” (p. 35) in attendance, yet that meeting still turned out to be the founding convening of a body that would profoundly reshape the world in the interests of the oppressed.

Talk about a lesson worth repeating at every single event we attend, and incorporating into every action we organize.

Making history as we inherit it

The amazing thing about the Soviet Union, as Gloria La Riva writes, is not that it “fell in 1991, but that it survived through the unimaginable challenges it faced” (p. 51).  Coming to power in the midst of a world war, inheriting a backwards social system and little industry, being invaded by 14 imperialist armies and White armies of the old ruling powers, losing 27 million people in the fight against the Nazi war machine, living day in and day out with constant imperialist aggression, economic sanctions, and military encirclement, the Soviet Union not only persisted, but managed to bring into being a social system far superior to capitalism.

Without capitalist competition and private property, the whole of society was supported and mobilized, as discrimination based on gender or nationality was outlawed and made into a social crime. Central to the organization of the Soviet Union was the right of oppressed nationalities to self-determination, “meaning that each nationality had the right to control the institutions that shaped its destiny” (p. 48). Lenin prioritized the fight “to eliminate all the deeply embedded biases and privileges connected with being Great Russians,” (p. 79).

Internationalism extended far beyond the borders of the Soviet Union, and into anywhere that working and oppressed people were struggling against imperialism. In this way, the Soviet Union became while it existed the ideological and material anchor of a class struggle that is global in scope. It was in part this dedication as it was borne out in practice that attracted Black revolutionaries, thinkers, and artists to the communist project, which Peta Lindsay addresses in the chapter “Black Bolsheviks and white lies.”

The first time, but not the last

The Russian Revolution ushered in the first socialist experiment, but it was far from the last. The communist struggle continues today, although the balance of forces shifted rapidly away from the working class in 1991.

We operate today in what the PSL terms a phase of global counter-revolution, and it was in this context that the organization formed in 2004. Since then, we have witnessed a new turn to the ideals of socialism in the U.S. As socialism is popularized, we have to be careful that its revolutionary edge isn’t blunted by either the capitalist class or the tendency that Lenin termed opportunism.

And to fight this, and bring to power a social system based on the needs of the many here in the U.S., it’s essential that we have an accurate characterization of the Soviet Union. It’s not important so that we can engage in intellectual debates online, but so that our movements as a whole can incorporate its lessons and build on its legacy. The chapters that comprise this book provide us with the tools to stake such a position and carry out such a fight.

Order your copy of Storming the Gates: How the Russian Revolution Changed the World and get free shipping!