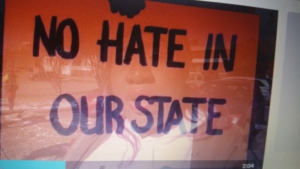 Few people know the name of Dr. Gilbert R. Mason, a Black doctor whose practice was just blocks from the 26 miles of Biloxi, Mississippi beach that was reserved for whites only. Dr. Mason’s 1959 wade-ins with nine other courageous Black citizens to desegregate Mississippi beaches was responded to with the bloodiest riots by racist whites in the state’s history.

At the new Mississippi Civil Rights Museum–the first state sponsored museum of its kind–the exhibits about Dr. Mason and so many others are intended to honor civil rights heroes and signal that the experience of virulent racism is something that should be kept in a museum. 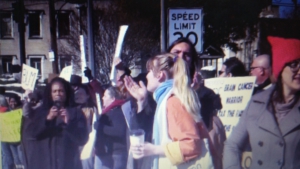 The museum was set to open on Dec. 9. But then the racist, bigoted demagogue Pres. Donald Trump announced he was attending the opening.

“Within an hour of hearing of his attendance I got in touch with others and we called the protest,” said Tamieka Brice, a protest organizer.

The outcry against Trump’s appearance at an event reserved for family and living cadre of the Civil Rights movement echoed through the halls of city hall and the Black Congressional Caucus.

“It is my appreciation for the Mississippi martyrs not here — the names both known and unknown — that will not allow me, that will not allow many of us standing here today to share a stage with a president who has not demonstrated a continuing commitment to civil rights,” said Jackson Mayor Chokwe Antar Lumumba at a press conference with veterans of the Civil Rights Movement at his side.

“We’re boycotting actions inconsistent with the Civil Rights Movement. I’ve been very clear about this: the president can come to a museum opening but what he does each and ever day, what he demonstrates is not a salute to civil rights”

“It’s laughable that the White House is criticizing John Lewis and Bennie Thompson for not attending the opening of a civil rights museum that honors the sacrifice of … wait … John Lewis, Bennie Thompson, and many others,” read the statement by Black Congressional Caucus Chair, Cedric Richmond from Louisiana’s District 2 that covers parts of New Orleans and Baton Rouge. “This White House is not serious about civil rights.”

As the lines are drawn across the country and those who want to continue to fight for a people’s agenda appear front and center, memorials to past Civil Rights martyrs can only educate and inspire a new generation of activism and revolutionaries setting the stage for an exhibit about Trump to be in a museum along side the system that he represents.