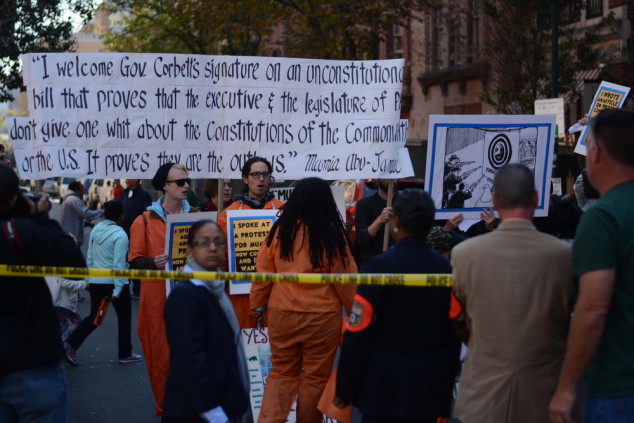 The following media release was taken from the website of the Abolitionist Law Center. The Party for Socialism and Liberation is committed to helping build the movement to repeal the unjust “Revictimization Relief Act,” free Mumia and smash mass incarceration.

November 10, 2014: Pittsburgh, PA – A lawsuit challenging a Pennsylvania censorship law intended to silence Mumia Abu-Jamal and others convicted of personal injury crimes was filed today, less than one month after outgoing Governor Corbett signed the bill into law as part of his failed re-election campaign.

Senate Bill 508 allows the Attorney General, county District Attorneys, and victims of personal injury crimes to bring a lawsuit in civil court against the person convicted of the personal injury crime to enjoin conduct that “perpetuates the continuing effect of the crime on the victim”. The actions that could prompt a lawsuit include “conduct which causes a temporary or permanent state of mental anguish.”

“This law is clearly unconstitutional. The Pennsylvania legislature and Governor Corbett wanted to use Mumia Abu-Jamal to score political points and passed a law that can’t pass constitutional muster. We’re suing Attorney General Kane and Philadelphia District Attorney Seth Williams before they can sue to keep Mumia from speaking publicly,” said Bret Grote, Legal Director of the Abolitionist Law Center.

Abu-Jamal has spent 33 years in prison, 30 of which were in solitary confinement on death row after being convicted at a 1982 trial that Amnesty International said “failed to meet minimum international standards safeguarding the fairness of legal proceedings.”

Abu-Jamal has given three commencement addresses in the past: another for Goddard College in 2008; one for Antioch College in Ohio in 2000; and one for Evergreen College in Washington state in 1999. He has recorded more than 3,000 essays, published seven books in nine languages, with two more books set for publication in 2015, and has been the subject of three major broadcast and theatrical movies. The latest film, Mumia: Long Distance Revolutionary, is currently airing on the Starz network, sold out theatres coast to coast, and has sold more than 20,000 DVDs.

In May 1994, a regular series of commentaries by Abu-Jamal were planned for broadcast by National Public Radio program All Things Considered. NPR fired Abu-Jamal after having its funding threatened on the floor of the U.S. Senate. The Department of Corrections punished Abu-Jamal for violating a prison rule that forbade prisoners from conducting a business or profession. The Third Circuit found that enforcing the rule against Abu-Jamal would cause him irreparable harm under the First Amendment.

“The Pennsylvania legislature has targeted Mumia Abu-Jamal and in the process swept up a whole host of people in prison and people who have come home,” said Nikki Grant, Policy Director ofAmistad Law Project. “The fact that this bill is even on the books makes it less likely that people who have been convicted of personal injury crimes will speak out publicly. These are the people who are already most marginalized in our society.”

The Human Rights Coalition, another plaintiff to the lawsuit, is consistently critical of human rights violations within the Pennsylvania Department of Corrections and is comprised of prisoners, prisoners’ family members, formerly incarcerated people, and community activists. “Human Rights Coalition utilizes the voices, input, and leadership of people in prison in all of our work,” said Patricia Vickers of Human Rights Coalition. “We also document prison abuse and are concerned that this law will make people fearful of reporting abuse.”

“How can the state’s legislators pass and politicians sign the recent law described as the ‘Muzzle Mumia Act’?” said Mumia Abu-Jamal. “They can’t. At least not constitutionally. In order to do so they had to knowingly and willingly violate both the U.S. and state constitutions and their very oaths of office.”