Cathy Rojas, the socialist candidate for mayor in New York City stated, “My campaign stands in 100% solidarity with India Walton and against all well-financed, illegal and underhanded ways the establishment in Buffalo is trying to subvert her victory in the Democratic primary. India Walton’s courageous and honest campaign has captured the imagination of working-class people of Buffalo.”

India Walton is a healthcare professional, mother of three, a 1199 SEIU union representative, housing rights activist — and a socialist. Her platform asserts that “housing, healthcare, healthy food and a quality education are basic human rights” and that she will “prioritize addressing the root causes of crime such as concentrated poverty and lack of living-wage jobs; emphasizing harm reduction and restorative justice programs rather than punitive measures.”

On June 22, Walton defeated four-time incumbent Mayor Byron Brown in the Democratic primary. In overwhelmingly Democratic Buffalo where there is usually no Republican opponent, the winner of the primary becomes mayor.

Since her primary win, India Walton has been subjected to a shameless smear campaign in the corporate media, such as a report in the Buffalo News about a “drug raid” on her home three years ago from “unnamed sources” where no one was arrested. The police raided her home with no prior indication of drug use, and no drugs were found.

At the urging of Carl Paladino, a life-long Republican and the chairman of the multi-million dollar Elliott Development Co., Mayor Brown began a write-in campaign to run for mayor even though he was defeated in the Democratic primary.

An enthusiastic Trump supporter, Paladino was the losing Republican candidate for New York governor in 2010 and was fired from the Buffalo School Board after openly racist comments about the Obamas. He has organized meetings of “business leaders” to support the write-in effort for the Mayor.

Brown has denied a close relationship with Paladino, but he has accepted campaign donations from his son William and their company Ellicott Development. In return, the Mayor has helped Elliot Development with tax breaks and rezoning.

Even though it is well past the legal date for applying for “write in status,” the Brown campaign is suing in court to change the filing date. In addition, the Democratic-led Buffalo Common Council has actually begun to study how the mayoral position could be dissolved in the city and replaced with a city manager who would “carry out the will of the Council members.”

Walton won the primary 51% to 46% for Brown. Does democracy only count when candidates approved by big corporate interests win?

But the Walton for Mayor campaign is busy organizing supporters and endorsements, such as the Buffalo Teachers Federation. Progressive parties and working-class activists are rallying, phone banking, door knocking across Buffalo and signing up volunteers.

The Cathy Rojas for Mayor campaign in New York City encourages every activist in western New York to rally to Walton’s campaign. Rojas states, “A Walton victory is our victory too. Mayor Brown and his supporters are afraid of working-class people who demand their rights. A vote for India Walton is a vote for yourself.” For more information, check out Walton’s website at https://www.indiawalton.com/about/ .

The Cathy Rojas for Mayor campaign is fighting for a socialist platform that has outlined a realistic way the city resources can be used to meet the needs of New Yorkers by providing jobs and small business relief, defunding the police, upgrading and protecting NYCHA, fighting for full rights for immigrants, creating truly affordable housing and much more. 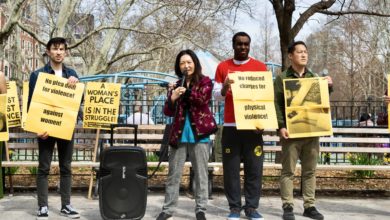