Last week, the Party for Socialism and Liberation traveled to Colorado to spread the word about the campaign of presidential and vice presidential candidates Gloria La Riva and Dennis Banks. La Riva and members of the PSL campaigned for three days, connecting with crowds of working class people in Denver, Colorado Springs, Aurora, Boulder and Fort Collins. There, they informed as many people as possible that a socialist candidate is on the ballot in their state, and that they are not stuck with the “choice” of predatory, bigoted Donald Trump, or warmongering Hillary Clinton.

The socialists engaged in discussion with the public about the struggle, and need, for socialism. PSL also campaigned at Denver’s bustling 16th Street Mall, the Mile High Flea Market, Denver’s University Metro Center and a house meeting.

Saturday the campaign encountered many working class people at the Mile High Flea Market. Many were enthused to see another option. Native people encountered by the campaigners were proud to see American Indian Movement co-founder Dennis Banks on the ballot. All were aware and supportive of theStanding Rock resistance. One man said he wanted to vote for Banks because “he looks like me!”

The campaign went to downtown Denver’s 16th St. Mall where they met amazing people. One family proclaimed their socialist and feminist beliefs.  Notably, campaigners met a Sioux family from Pine Ridge Reservation, South Dakota: the 13-year-old girl is writing a paper on AIM , and the father, a construction worker, was the founder of a construction company that employs young Native men and helps them develop construction skills.

Sunday evening, the La Riva campaign was hosted at a house meeting by Marina La Riva and Bill Fisher at the Willan family’s beautiful mountain home in Palmer Lake, ending with a camp-fire. One woman, Eileen, a teacher in environmental studies, talked of the extremely low wages she earns as an adjunct, and appreciated our call for free education and a truly livable wage for teachers. Together we discussed the disgusting bigotry of Donald Trump, the right wing policies of Hillary Clinton, and the need to join the struggle for socialism.

On Monday, the campaign went to Denver’s Metro University center, where they met progressive and anti- capitalist students who support the PSL’s 10-point program and the struggle for socialism. That evening La Riva was hosted by socialist students at Colorado State University in Fort Collins. The students were former Bernie Sanders supporters who wanted to continue fighting for free healthcare, education, housing, and true equality for all oppressed people.

On Tuesday evening, La Riva participated in a third party debate with Rocky De La Fuente from the Delta Party, and Darrell Castle of the Constitution Party. 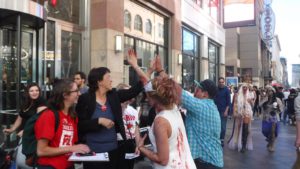 After the debate, La Riva was interviewed by the Colorado Green Party’s Candidate for U.S. Senate, Arn Menconi. La Riva said,  “The Party for Socialism and Liberation stands for the things that people need. We would make jobs, free healthcare, free education and affordable housing constitutional rights.

“But the fundamental difference is that the Republicans and Democrats are capitalist parties, and we are a socialist party. Capitalist parties are beholden to Wall Street and the monopoly banks and the giant multinational corporations who possess extreme wealth and influence. Our party is at its core diametrically different because we are a working class party, beholden only to the greater good of all workers and oppressed peoples here and around the world.”

All candidates present at the third party debate raised the demand for the abolition of the two party system to broaden the options for U.S. voters.