The Party for Socialism and Liberation and the Gloria La Riva / Eugene Puryear PSL Presidential Campaign are joining together with other left-wing forces and labor unionists who are encouraging already registered Democrats to cast a ballot for Bernie Sanders, and against Hillary Clinton, in the New York State Primary on Tuesday, April 19.

To that end, we are helping to distribute the “Battle of New York” newspaper, which includes articles from Dr. Cornel West, Michelle Alexander, Glenn Greenwald, the Transit Workers Union Local 100, and Fahd Ahmed, Executive Director of Desis Rising Up and Moving, among others. It does not call for people to join the Democratic Party, but speaks to already registered Democrats about how the party’s leadership machine — represented by the Clintons — has supported corporate greed, racist mass incarceration, endless war and NSA surveillance. The project is independent of the Bernie Sanders campaign and crowd-funded among people who agree with the paper’s political perspective.

The PSL is not on the New York State primary ballot and we typically play no role in any other party’s primary elections. Our members, like millions of other “independents,” are not registered as Democrats or Republicans, and are thus barred from voting in New York State’s closed primary races.

But those who are registered as Democratic Party voters can play a decisive role this Tuesday in the national contest between Hillary Clinton and Bernie Sanders. This is no ordinary Democratic Party race, in which the candidates basically have a personality contest while representing the same powers and offering the same vision. The two candidates have come to represent a great divide within society and within the Democratic Party itself.

Clinton is the candidate of the status quo favored by Wall Street, the Pentagon, the Democratic Party machine, and the corporate media. Those political forces have been working non-stop to defeat Sanders, a self-described “democratic socialist” — who has galvanized a movement around his progressive program for universal health care, tuition-free public universities, paid family leave, a $15/hour minimum wage, an end to private prisons and to stop the phony “War on Drugs.” While Sanders’ own program is close to New Deal liberalism, his campaign has become a vehicle for millions of people to openly question the capitalist system and popularly discuss socialism.

Sanders’ message has resonated so powerfully among low-wage workers, young people and others that he has gone from an unknown candidate just a short while ago to winning eight of the last nine states against Clinton. The Democratic Party establishment is so alarmed that they’re now counting on their “super delegates” (professional politicians and operatives) to cast votes for Clinton at the Convention, even if their states support Sanders. They’re exposing just how undemocratic the Democratic Party, and the whole electoral system, really are.

New York State will get to decide if the progressive revolt from below within the Democratic Party will continue to challenge the status quo, or if it will be suppressed. A Clinton victory here could make her lead insurmountable, while a Sanders victory would be such a groundbreaking upset that it could tip the momentum in the remaining states and potentially bring Sanders even with Clinton headed into the Convention. A Convention showdown — in which the Democratic Party establishment attempts to steal the nomination from a more popular left-wing alternative — could lead to a significant rupture in U.S. electoral politics.

The socialist program of the La Riva / Puryear campaign differs substantially from Sanders. Unlike Sanders, we believe the big banks should be seized and put under people’s democratic control, not broken into smaller private banks. We believe all U.S. aid to Israel should be ended and we stand completely with Palestine. We believe disastrous climate change can only be reversed by getting rid of the capitalist system. We believe in dismantling the Pentagon’s $1 trillion budget for Empire.

We disagree that people should vote for Clinton in the general election if Sanders loses the primary. The Democratic Party leadership’s plan to deprive Sanders of the nomination, including stealing it from him at the Convention, would be just further proof that it is a party of the ruling elites, and won’t become a vehicle for the people’s struggle from below. What is most necessary is to build a strong people’s movement independent of both major parties. We are running our campaign in the November general election with this program and perspective.

We know that elections alone won’t change the system. But in tomorrow’s vote, registered Democrats in New York have a clear choice and a real opportunity to reject the Democratic Party machine, the Wall Street-owned political establishment and capitalist politics as usual — by voting for Sanders on Tuesday. Regardless of the outcome, we call on everyone to join with us to build the movement for socialism in the coming days and months! 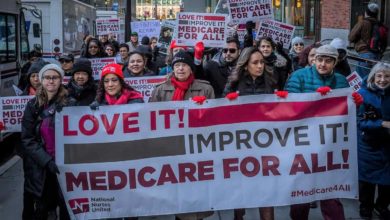 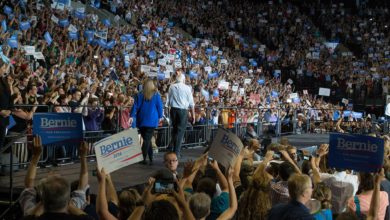 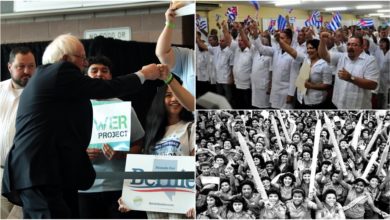 Sanders attacked for saying one nice thing about Cuba