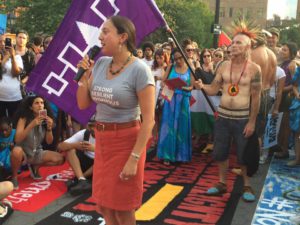 On Sept. 9,  about 500 protesters gathered in Washington Square Park in New York City in solidarity with the resistance to the Dakota Access Pipeline at the Sacred Stone Camp in North Dakota. Thousands have traveled from across the country to support the Standing Rock Sioux Tribe’s fight against the pipeline. The pipeline was designed to transfer up to 400,000 barrels of Bakken crude oil from North Dakota to Illinois, and was expected to snake narrowly close to the Missouri River, the tribe’s main water supply. The government did not consult with the Standing Rock Sioux Tribe when the permits for building were approved by the department of engineers.

The Sacred Stone Camp began as an effort of a few members of the Tribe to stand against the pipeline, and has since involved over 200 other Tribes and tribal leaders from across the country. They have been joined by the Black Lives Matter movement, the Palestinian solidarity movement and many other activists and organizers from all struggles – including socialist presidential candidate Gloria La Riva and her running mate Dennis Banks,  the founding member of the American Indian Movement Dennis Banks – have flown in from around the country to stand with the growing resistance. Thousands of people have come in and out of the camp, and it has only grown stronger as the message of the Standing Rock Sioux Tribe has reached millions of people worldwide. 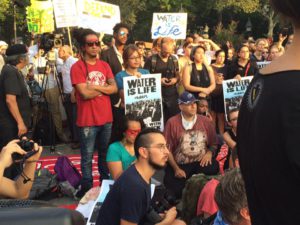 As the resistance has grown in size and more and more people from different struggles and walks of life join in – the government must bend to the wills of the people. The federal government has stepped in and ordered a temporary stop of the pipeline. The resistance at the Sacred Stone Camp has set an example worldwide that when the people struggle – they will always win.

Such a momentous win against the Dakota Access Pipeline has reverberated around the globe and emboldening resistance everywhere. Recently, the United Nations and Amnesty International has gotten involved. In Laos, President Obama is currently propagating the expansion of the TPP and showing the world the United States’ intention to “pivot” or focus the its imperialist wars of aggression towards South East Asian. While in Laos during a town hall , a Malaysian woman asked President Obama what he would do to ensure environmental justice for the Standing Rock Sioux. 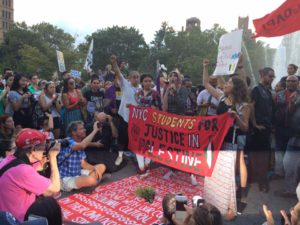 Around the country there were solidarity actions organized by Native People and coalitions of Black Lives Matter, environmental, and anti-war activists. In New York City, hundreds gathered in a rally that carried the spirit of the Sacred Stone camp right here to Washington Square Park. Several organizers sang songs of resistance and protest, while other burned sage and chanted, “Water is life.” Several protesters were holding signs decorated with beautiful art depicting the importance of water and the spirit of Native resistance throughout history and today.

One participant, Kacey Amaru, a Native artist, reflected on the growing unity and resistance born from the Sacred Stone Camp, “Everything that is happening right now at this rally that it shows other Native people that we are all related and that we are connected. I feel like this era that we’re born in this generation are waking up. Black folks are waking up and realizing where they come from, and Native People and Latino people are waking up and realizing where we come from too, that we’re all from the same struggle. We are seeing the birth of a strong unity.”